Bleachers out in the Sun on Highway 61
By Bob Wilkiewicz
Nostalgia Super Stock® Inc. Staff

SIKESTON, Mo. – Combine a new season with a new format at a first-time track for Nostalgia Super Stock® Inc. in the first weekend of May and everything came together for a tasty season-opening event.

Dominic Blasco, one of the former partners at Great Lakes Dragaway in Wisconsin, had brought his promotional and track maintenance skills to Dyno Dom’s Sikestion Racway a few seasons ago and this time used both to present the third annual Black Arrow Cup in association with NSS® Inc. and the Midwest Nostalgia Pro Stock Association. 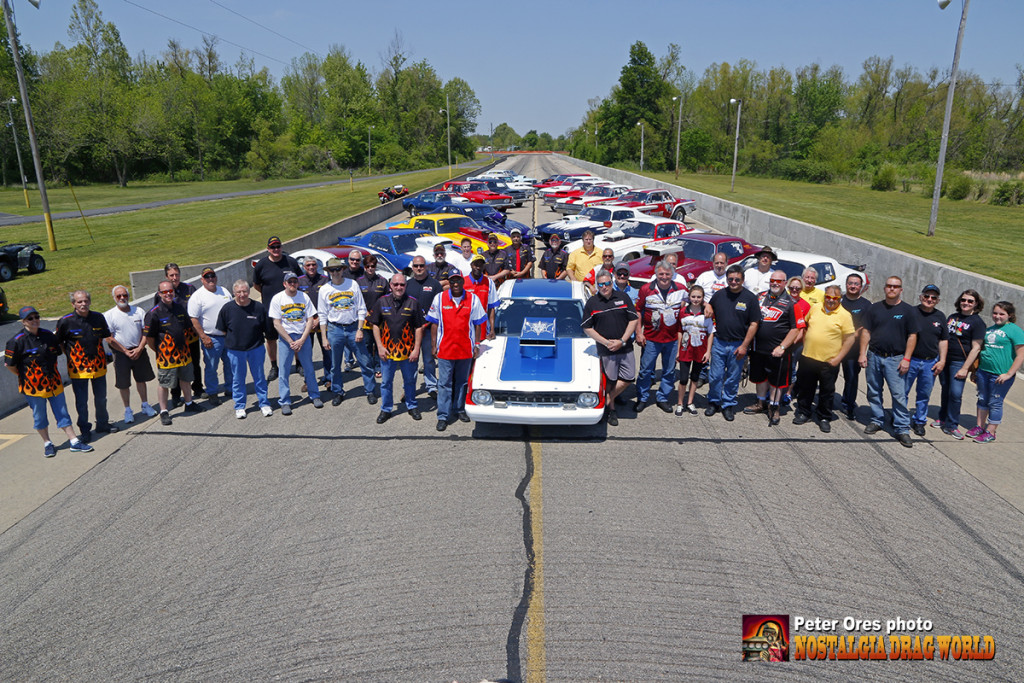 Along with perfect weather, the result was a exceptional treat for both the racers and spectators, who both got to deliver and watch some spectacular action for the Saturday evening event, a tribute to the late racing legend Bill ‘Grumpy Jenkins.

With 10-car fields in both categories, the fans enjoyed five sessions and three finales of Chicago-style racing in addition to the regular bracket program. 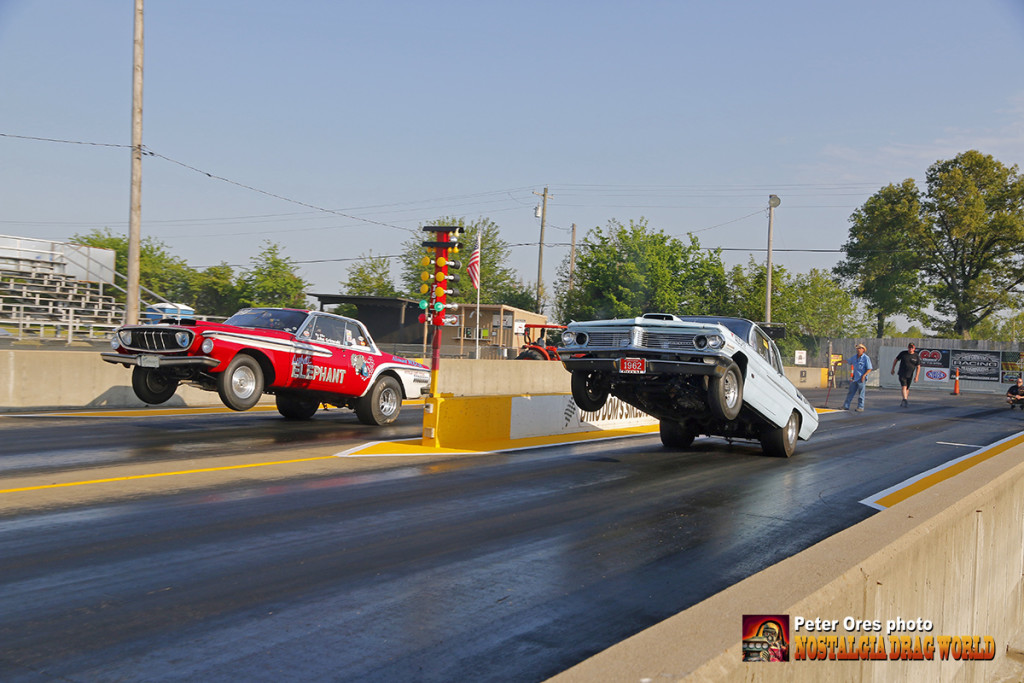 John Grinwald, Watertown, WI in the 62 Dodge “Asphalt Elephant”
and Springfield, IL resident Larry Quinn in the 62 Pontiac “Blast From The Past” take flight together!

Grinwald, who performed consistently quickly right out of the trailer with a series of times in the 5.60’s, clocked 5.6376 at 123.74 in the finale after a best of 5.61. “I had a good seat to watch Larry go on a lot of interesting rides,” said Grinwald.

Over the off-season, Quinn had installed a higher ratio rear end gear and the additional torque hitting the suspension made the car turn hard to the left.

“She’s a critter right now,” said Quinn, who held on for a 6.5755 at 80 mph in the finale after edging over the centerline line and taking out the timing cone at the 330-foot mark. 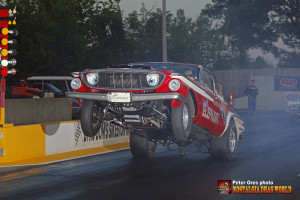 Who said Elephants can’t fly? John Grinwald of Watertown, WI is out to prove them wrong ! 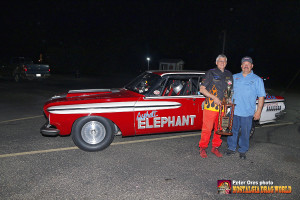 “If it would go straight I wouldn’t care,” said Quinn. “All I can do is lower the shocks and the bars one step at a time. Maybe I’m the new ‘Sky Pilot’”, referring to Grinwald’s 1/8-mile wheelstand and subsequent nickname since the 2007 Mopars at The Strip event.

“It’s amazing what one change can do, especially early in the season,” said Grinwald, who had changed his carburetor jetting before the finale. “It takes a lot of fixes to make these things go right.”

The closest NSS® matchup took place between regular rivals John Rousset in his ’63 ‘Hard Days Night’ Plymouth and Doug Henderson in his ’64 Plymouth ‘Never Too Late.’ 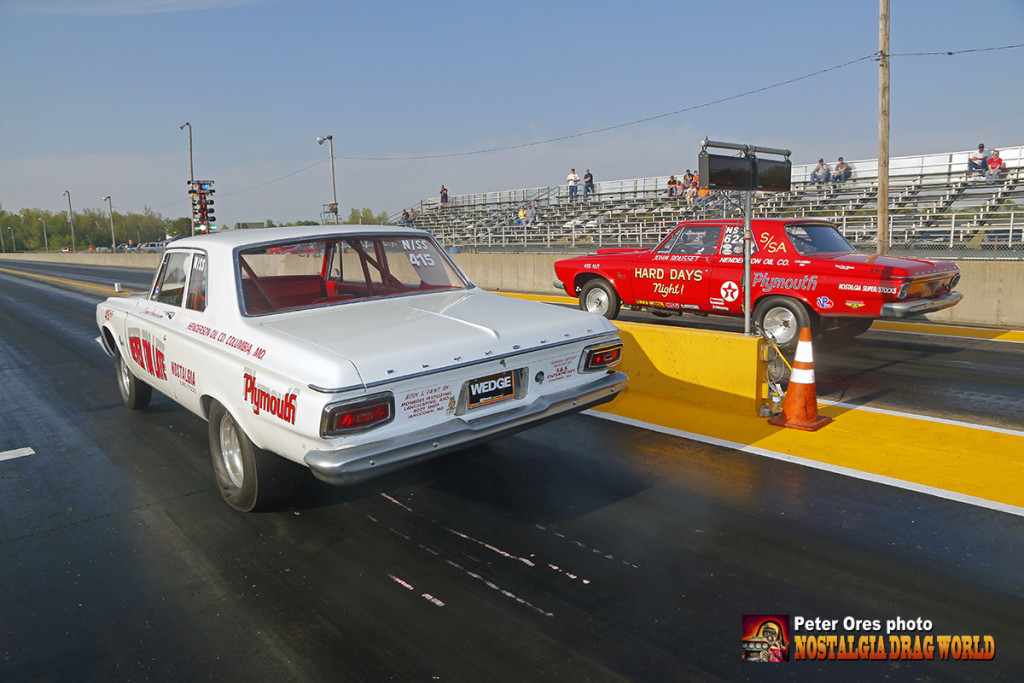 Doug Henderson (left lane) in his 64 Plymouth “Never To Late” and John Rousett’s 63 Plymouth
prepare to do battle. Both reside in Columbia, MO

Other NSS® matchups included Bob Durling’s ‘Teachers Pet’ ’63 Plymouth against Wayne Keimig’s ’67 Ford Fairlane ‘Nemesis’, a spare car for his ‘Kansas Comet,’ which is in the shop for extended maintenance. 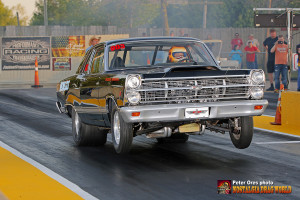 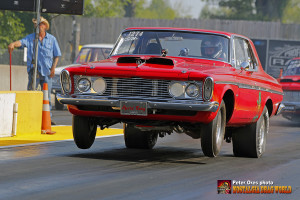 Jim Brandon and the ’64 Dodge ‘Reber Rouser’ battled Randy Spurgeon’s ’65 Plymouth ‘Juggernaut,’ with Brandon recording the field’s second-best effort of 6.09, also in the second go round. 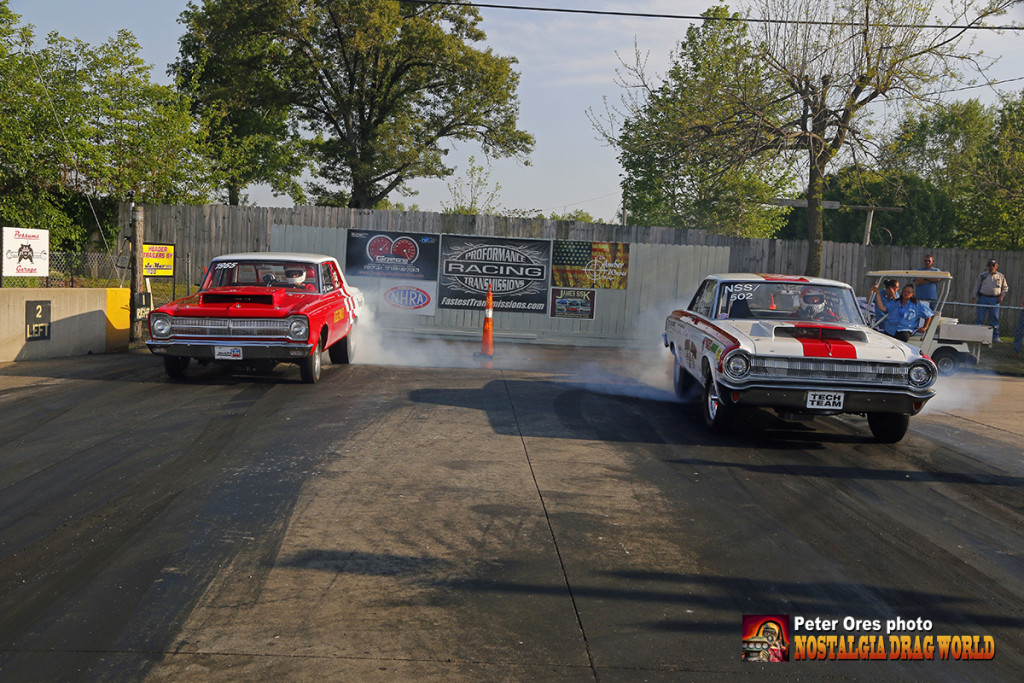 Randy Spurgeon in his 65 Plymouth “Juggernaut” from Owensville, MO and Jimmy Brandon of Bland, MO
“heating up their slicks to do battle”

Spurgeon finally slipped past Brandon in the third session, 6.2670 to 6.3384. The two had battled in the finals at a race at Sikeston last autumn. 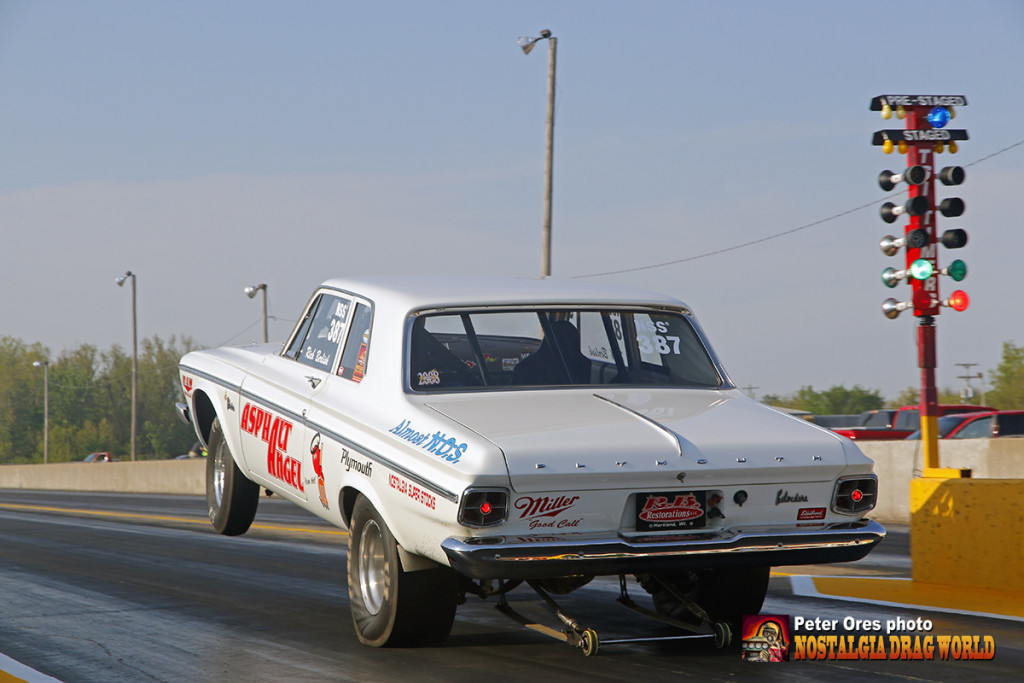 NSS® Inc. president Rich Berlisk had the ‘Asphalt Angel’ ’63 Plymouth back in action after sitting out most of last season but only after an extraordinary effort to get his motor back from the builder and into the car one day before the event.

Rich Berlisk of Hartland, WI and his 63 Plymouth “Asphalt Angel” Gettin it on !

After a half-track check out pass on Friday, Berlisk was back to normal with a 6.1873 at 111.40 in Saturday’s first session. But unfortunately the loss of oil pressure problem which had previously plagued the machine came back and Berlisk chose to keep her in the trailer.

The other casualty was Kevin Wilson’s ’63 Chevrolet, which broke a third gear slider in the transmission on Friday. Wilson, from Tupelo. Mississippi, determinedly decided to stay and go with just two gears but eventually was reduced to being towed to the group picture and parade lap on Saturday. 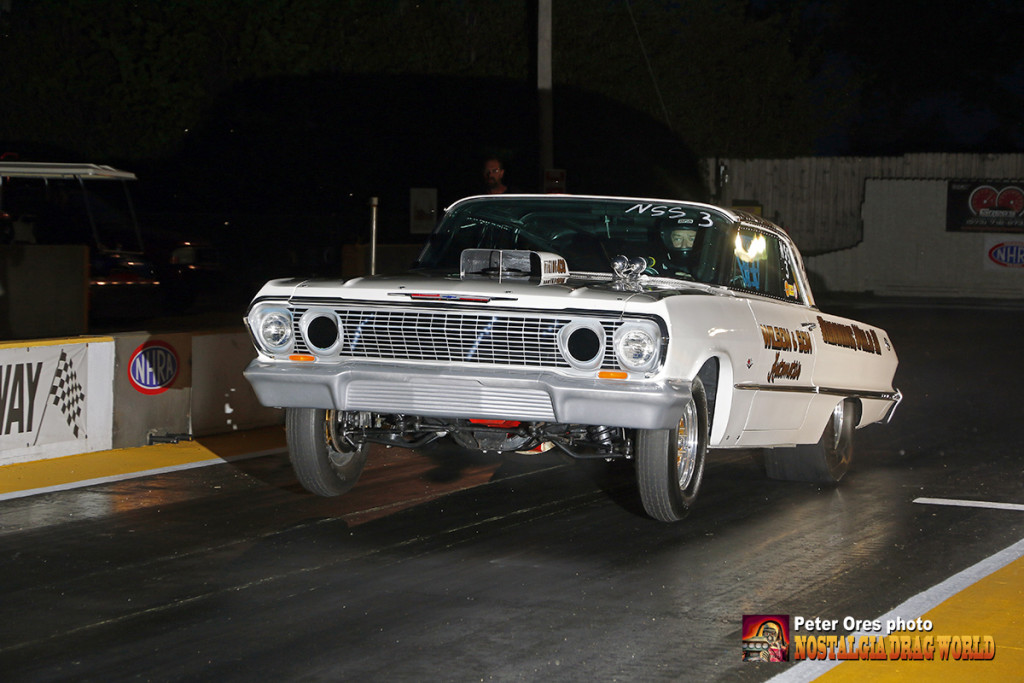 Kevin Wilson in his 63 Chevy 409 “Running Wild II” lettin it Rip ! Kevin is from Tupelo, Mississippi

His persistence paid off, however, as he was awarded the Best Appearing Nostalgia Car of the event. 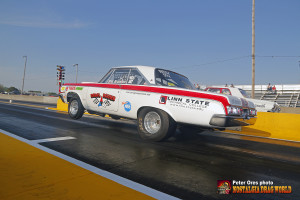 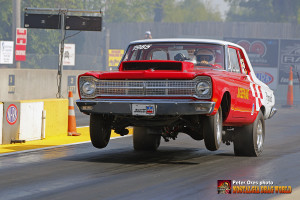 Randy Spurgeon in “Juggernaut”, mashes the pedal to launch 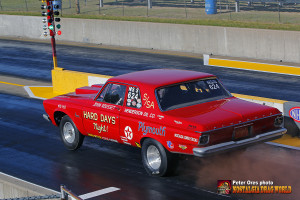 John Rousett from Columbia, Mo “Lettin loose at the sight of green”

The Pro Stockers were divided into two divisions, large and small motor, with each No.1 qualifier prevailing in the finals.

In large motor, Bill Neri set his 1974 Camaro Warren Johnson tribute car in the top spot at 4.79 and outlasted Chuck Weck, who worked from a 4.90 base in the Team Strange 1986 Pontiac Firebird. 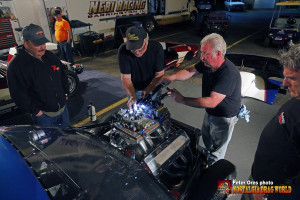 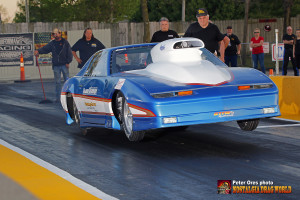 Each with marginal clutch situations, both drivers had trouble holding their cars in staging with Weck eventually redlighting and Neri coasting to 9.3757 at 92 mph for the victory.

“Ideally we wouldn’t have even gone up that way, there’s only so much we can do when they (the clutches) are hurt so much but we just have to tune for it,” said Neri. “We like to take care of the fans, they are paying to see a good show. It wasn’t clean but we got down the track.”

Note to Bill: It was still a good show. 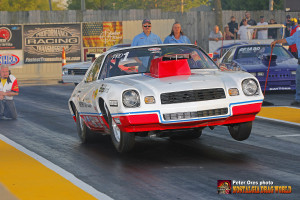 Mark Pappas in his RMS camaro reachin for the sky 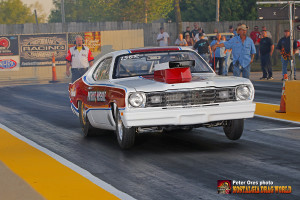 Ted Peters in his “Patriot Missile” on another great pass.
Ted is a 24+ US Air force veteran and one of the most popular drivers on the Nostalgia Pro Stock circuit

Peters was the defending champion. “Now I have to go back to work and try to make it 2-2,” said Peters. 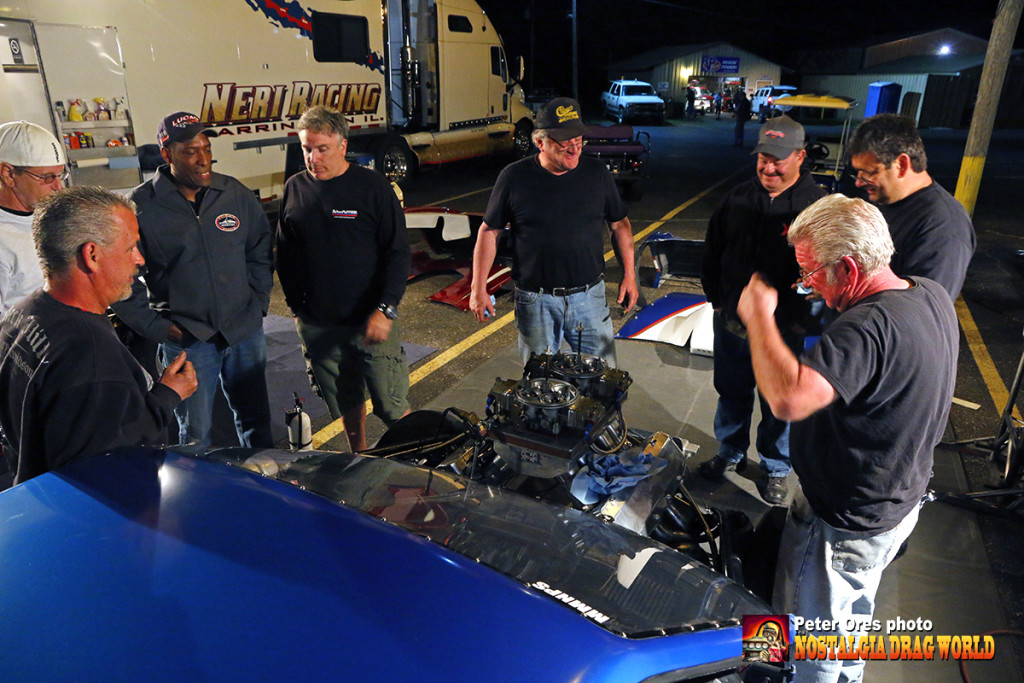 This final was also full of staging drama, starting after Peters’ burnout. Out 200 feet beyond the starting line, he was not able to get the car into reverse because of a lever/linkage malfunction.

But NSS® Inc. starting line supervisor Larry Brennan crawled under the car and finessed the mechanism into working correctly again. 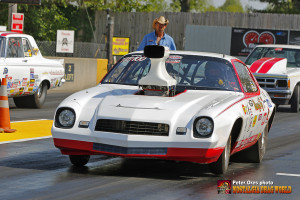 Another shot of “Grumpy’s Toy XVI. Hood scoop was actually used by the Grump himself 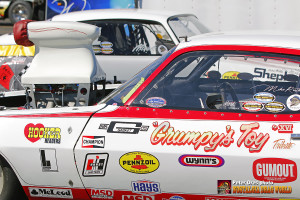 Meanwhile, Pappas had done his burnout, backed into the ready position and patiently waited for Peters, eventually shutting off his engine.

“I would have waited and gone through the whole routine over again if we needed to,” said Pappas. “We also had a clutch issue. Our guys (Mike Montoya, Bob Dill and Bob Cole) did a great job to get a 21 out of it.”

The Pappas Team also overcame a transmission problem with second gear to post a 5.08 in the final qualifying. 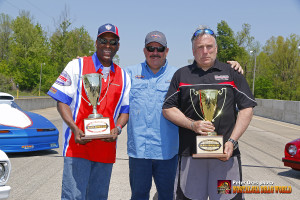 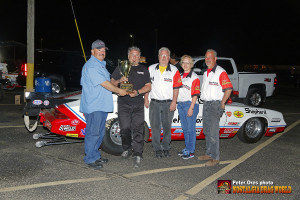 “I respect Ted very much,” said Pappas. “He’s a big leaver on the ‘tree but at the same time there’s no one I enjoy defeating more than Ted.

“We didn’t even know if we were going to make this race due to some issues with my business so we weren’t able to prepare the car as well as we normally do. For each of us to get things to work out as well as we did, that was very good.” 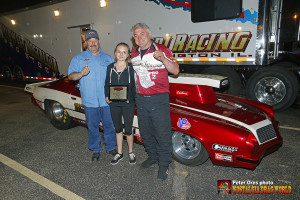 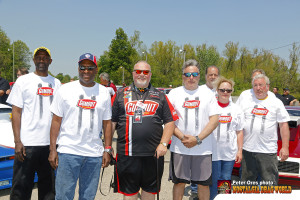 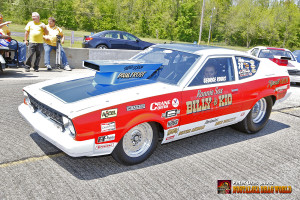 “Jungle George” Kubis built this stunning recreation of Billy” The Kid” Stepps Plymouth arrow. Powered by a 500cid Keith Black hemi this car is a handful 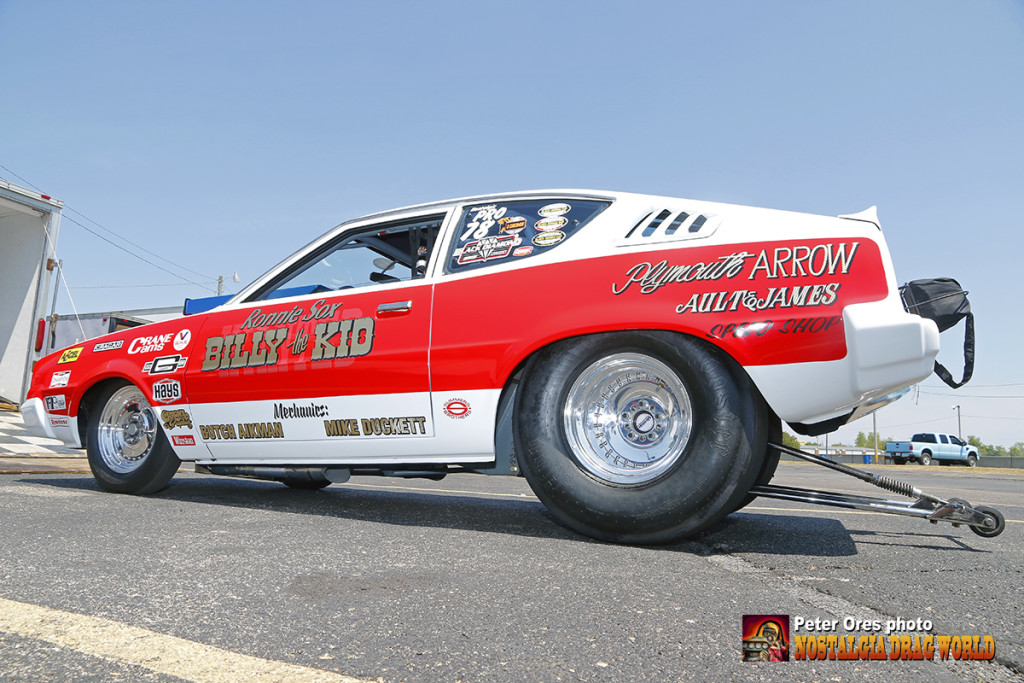 Side view of ‘Jungle’s” Arrow. The detail work on this machine is off the chart 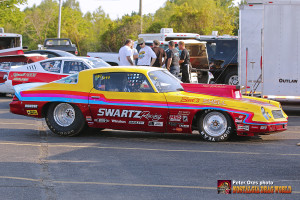 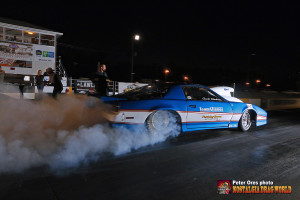 As Bob Ucker would say just a bit out of shape. Bill Neri had the fans on their feet with this wild run. 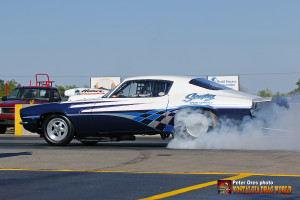 Scott Hoffman on a qualifying pass. This was a great outing for Scott as he made it to the
semi finals where he just got nipped in the lights by eventual runner up Ted Peters