Doug Henderson and I sat in the quiet of the conference room, a respite from the noisy buzz of animated conversations going on in the hallway and in the shop.

It was just after the annual club meeting had been adjourned and he probably was more than a little relaxed. He had just retired after five years as club secretary and would no longer have to take notes and keep records.

Last year, he had retired from the distribution endeavor, following a 36-year career of building a business and no longer had those obligations either. 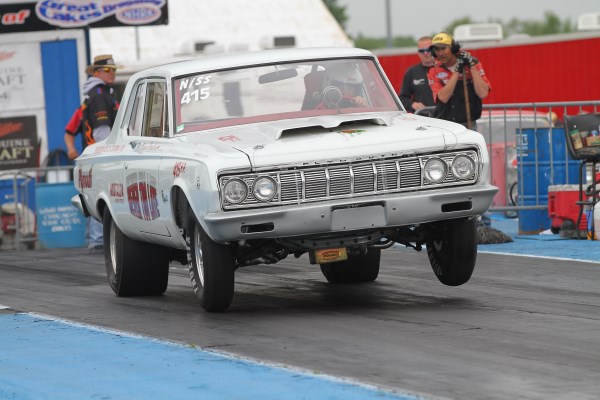 With a new season ready to roll out, right now, life was good.

His eyes were clear and gaze steady; the intelligence behind them so very visible. His manner was calm and deliberate but at the same time there was no mistaking the determination that was present.

You knew that if you made a statement it had better be true. And If he asked a question, you needed to give the right answer.

In addition, you knew if he said something, it needed to be reported right. Doug Henderson is no one’s fool and you can’t fool Doug Henderson.

The surprise? He said he didn’t care if I got the quote exactly right as I worked to take notes as fast as our conversation.

“I know you understand what I’m saying, what the idea is,” Henderson said. “And I know you will write it so the reader will understand.”

So what is the concept?

It’s the essence of what Nostalgia Super Stock Inc. does; the heart of automotive high performance in an accurate historical context. Heads-up racing. Easy pit access. Friendly talk with the fans. Each event day. Every session. Every season. Season after season.

The process reminds me of a quote once attributed to baseball Hall-of-Famer Joe DiMaggio. 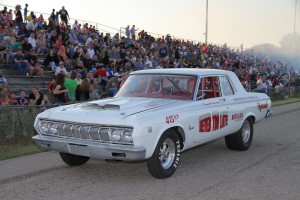 Photo by Peter Ores Ores Action Photography
When asked why he ran out everything, even routine infield ground balls or easy catches in the outfield, DiMaggio replied, “There might be a guy in the stands who came out today and is seeing me for the first time or will for the last time. I want him to see my best.”

The same idea applied to what the participant gets also lives in the phrase of boxer Jake LaMotta’s brother in the movie, Raging Bull; “If you win, you win,” said Joey LaMotta, played by Joe Pesci. “If you lose, you still win.” (because you gained an opportunity to improve)

For NSS Inc., Henderson explained the concept this way. “We never lose in what we do,” he said. “The competition is against your (our) past. To me, what matters is challenging yourself (ourselves) and getting better as you (we) progress.”

The idea is also a community, a network, a team that works together to produce an accomplishment of quality. Of something well done and memorable.

Henderson is the personification of that fundamental essence. “I’m not concerned about losing one race and then going home,” he said. “We do what we do and that’s producing a complete show.”

While an exhibition format overall, the smaller pieces, the individual races have competitive rivalries every much as intense as the win and lose events of years past and time present.

For example, when Henderson runs his friend John Rousset, they both are trying to win that contest. On one pass last season, the margin-of-victory was 0.005 of a second. Those efforts make a good show.

Not only as an individual and as an officer, Henderson has been a major club financial sponsor for many years through Henderson Oil.

In addition, his wife, Alicia, recently retired as webmaster after managing the club’s internet site since its initial startup.

“I need to acknowledge her support,” Henderson said, “in not only going to the races but in not asking me to attend her sewing club.”

For his post-retirement years, Henderson said he will keep a steady pace but would like to race the club’s event at Summit Motorsports Park (Norwalk, OH), where he has not yet gone down that track.

But with the sewing club joking done, he continued, “A lot of this is the satisfaction of getting to know and keep in the same venue of things. And there’s also getting to know other people and what they do. There is a lot more to it than just the race track.”

Henderson has always applied the same attention for preparation and detail to his race car as he has to the club and his business. As a teenager, Henderson “fooled around some” with muscle cars.

He explained; “Like what happens to most of us, the responsibilities of life, families, and work make personal interests take a detour. Thus, the name of the car, ‘Never Too Late’ was born.”

In the mid 1990’s Henderson was introduced to NSS racing by two members, the late Mike Swanson and long-time and current member John Rousset.

“Mike introduced me to Darrell Bias, a chassis builder from Versailles, MO,” said Henderson. “From Darrell I was able to purchase a 1964 Plymouth Savoy roller, an original Max Wedge intake, a pair of AFB 3447 carburetors and a title. That’s where it all started.”

The Savoy was originally purchased new by the Gerald Sloan family as their family car from dealer Ernie Jones Auto Sales in Eldon, MO on February 15, 1964. When son Steve Sloan turned 16, he was given the Savoy that he flogged on for many years before selling it to Darrell Bias.

“People have told me they remember the Slant 6 Steve had under the hood that surprised many, especially wearing the Max Wedge hood scoop,” said Henderson.

In 1999, Henderson returned to the driver’s seat.

“Mike and John were instrumental, I could not have accomplished this without their help and motivation,” said Henderson. “They had a lot of knowledge which made my work easier. They knew what to do.” 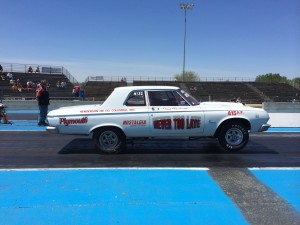 Never Too Late
Car No.:

The Never Too Late 1964 Plymouth Savoy is a beautiful example that the old saying is true; that going back to better times is something which can be done anytime someone applies a combination of knowledge and determination.

Doug Henderson is a super-veteran of drag racing and past owner of Henderson Oil Co., a petroleum distribution business he started 36 years ago. Henderson returned to the driver’s seat in 1999 after a 35-year absence.

The ‘Never Too Late’ 1964 Plymouth Savoy was factory-built as a 6-cylinder, 3-speed manual transmission economy car and had served that purpose for many years. However, by the time Henderson came across the vehicle in Eldon, Missouri, it had deteriorated to “a shell in a pasture,” he said. Purpose-built specifically for NSS racing, the Max Wedge replica started its second career in 1999.

Except for the paint work, the car was built completely in Henderson’s home garage with help from Mike Swanson, previous owner of the Black Max and a former Nostalgia Super Stock Inc. member.

‘Never Too Late’ is a very consistent and dependable race car, an example of the horsepower and basic simplicity which made the early super stock cars so memorable. 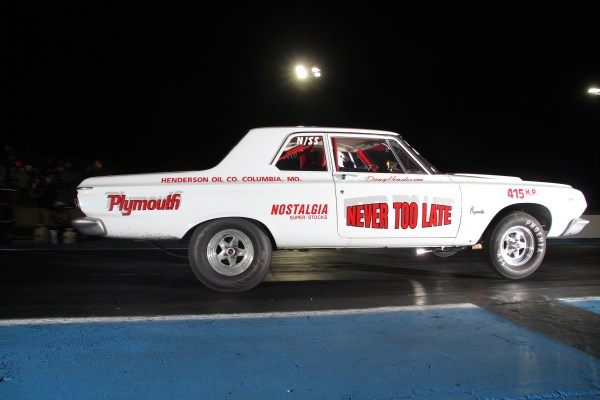 One thought on “Never Too Late – Doug Henderson”