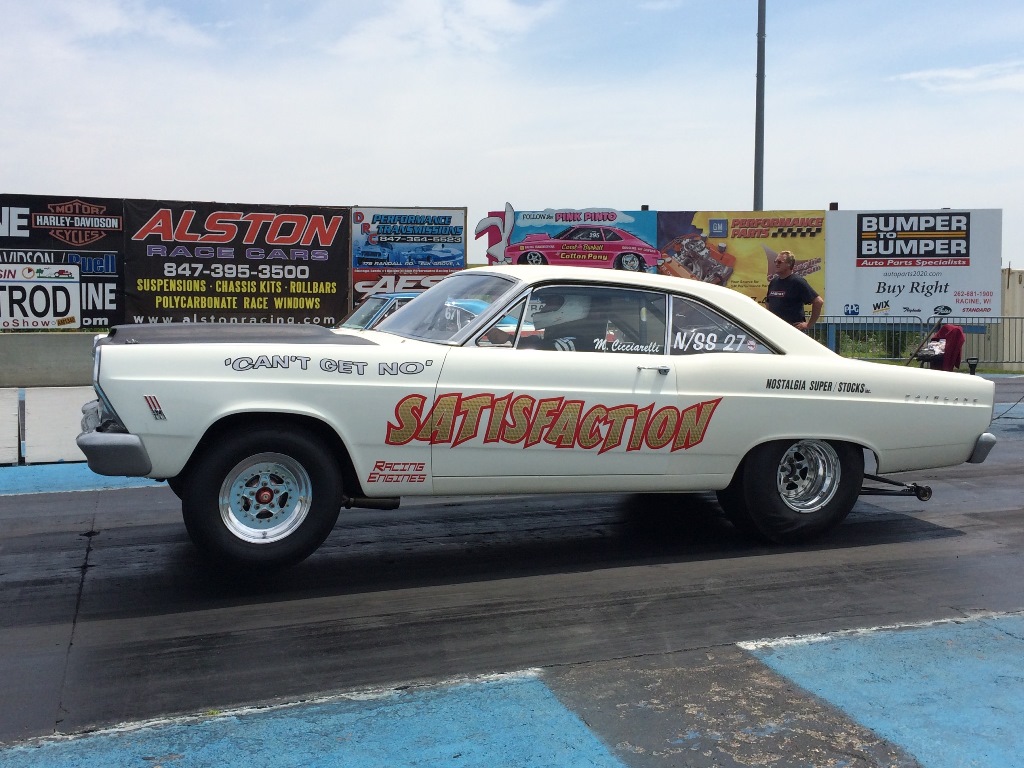 Somewhat adapting the idea of a man for all seasons, you could say Mike Cicciarelli is at least a man for two seasons – present and past.

With one career foot in current Indy car racing as a suspension engineer, formerly for Chip Ganassi and now for KV Racing, Cicciarelli has his other foot firmly in NSS racing with his 1966 ‘(Can’t Get No) Satisfaction’ Ford Fairlane.

“Modern racing has, of course, lots of high technology; we use computers for everything and the materials, such as carbon fiber, are exceptional,” said Cicciarelli. “But automotive knowledge and experience in general are still very helpful. “On the nostalgia side, I try to keep the high tech understated and stay with the original intent.”

More than intent, one proof that Cicciarelli does what he says is the fact he rows his Fairlane the drag strip with a 4-speed, so make that two feet and a right arm. Another proof is his towing rig, an open trailer behind a SUV-style truck. 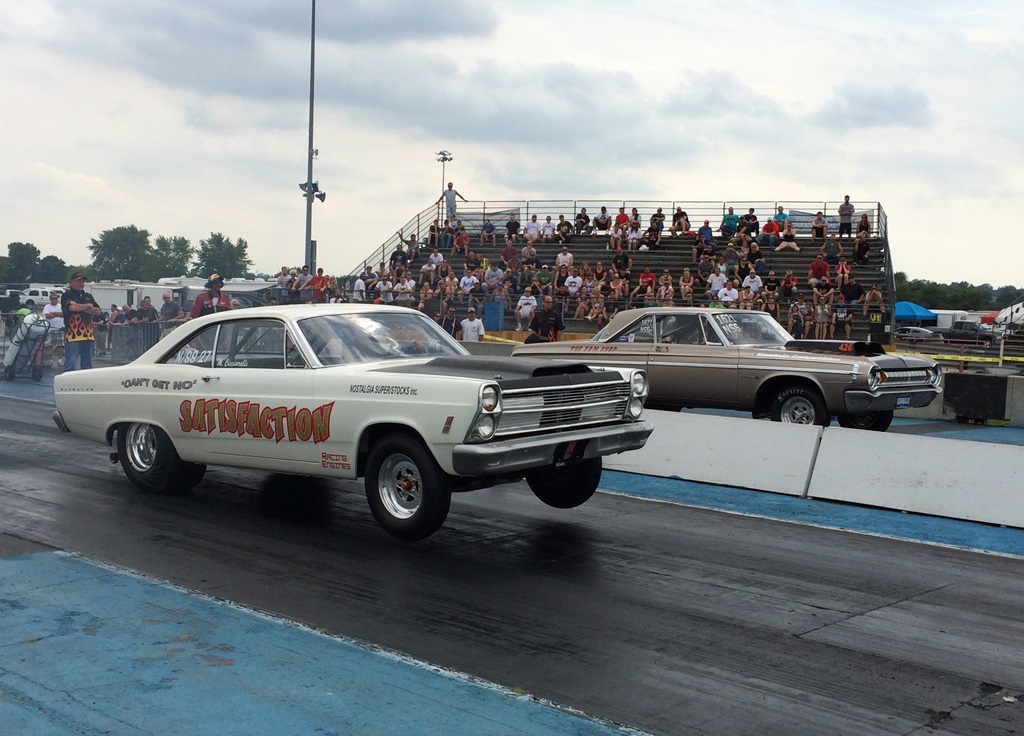 His parents owned a 1967 Fairlane, starting Cicciarelli’s interest in the model. A meticulous planner, he is also an patient performer and eventually gets exactly what he wants. He purchased ‘Satisfaction’ in 1982, started the first construction tasks in 1983, finished in the late 1990’s and joined the club in 2000.

“In the late ’70’s and early ’80’s, the FE’s were performance kings,” he said. “I went to Cordova and Byron and got to see the real Super Stock cars run. That lit the wick for me. There’s nothing more desirable than seeing a 427 Fairlane run down the strip.” After starting out with 12-second passes, ‘Satisfaction’ now sails down the strip in nine seconds flat.

“We have made a lot of progress, come a long way,” Cicciarelli said. “The chassis was built in a shop with a sawzall and MIG welder. It’s a testament to what we worked with and the ways things were done back then. “As much as possible, we try to fabricate things with the old basic materials but at the same time we have access to modern knowledge. I have a big appreciation for the old stuff.”

Statements like this show another side of his complete package. In addition to his engineering expertise, Cicciarelli also well understands and appreciates the intangible parts of the sport, the history and the showmanship. And that gratitude extends to his driving style.

“I owe a lot to (fellow club member) Larry Quinn,” said Cicciarelli. “He’s been a big influence in not only how to build a nostalgia car but in how to put on a show. I admire him very much for that. He ends up elevating everyone else. “The way he drives, he never holds anything back, he goes 110 percent. And he also enjoys helping other racers improve their cars.”

Regular eight-second runs aren’t necessarily a goal but are likely inevitable for Cicciarelli. “I’m confidant now we have a reliable drivetrain; the emphasis will be to make the car lighter,” he said. “Being able to perform with 95 percent efficiency instead of 85 percent, that’s the way. I’m optimistic in the potential. I like having a car that runs faster than it looks.”

On the car’s deck lid, Cicciarelli has written the Top 10 reasons why race cars should have manual transmissions. One is that changing gears by foot and hand, “makes me smile.” What are the other nine? You’ll need to come to the track and read them for yourself. 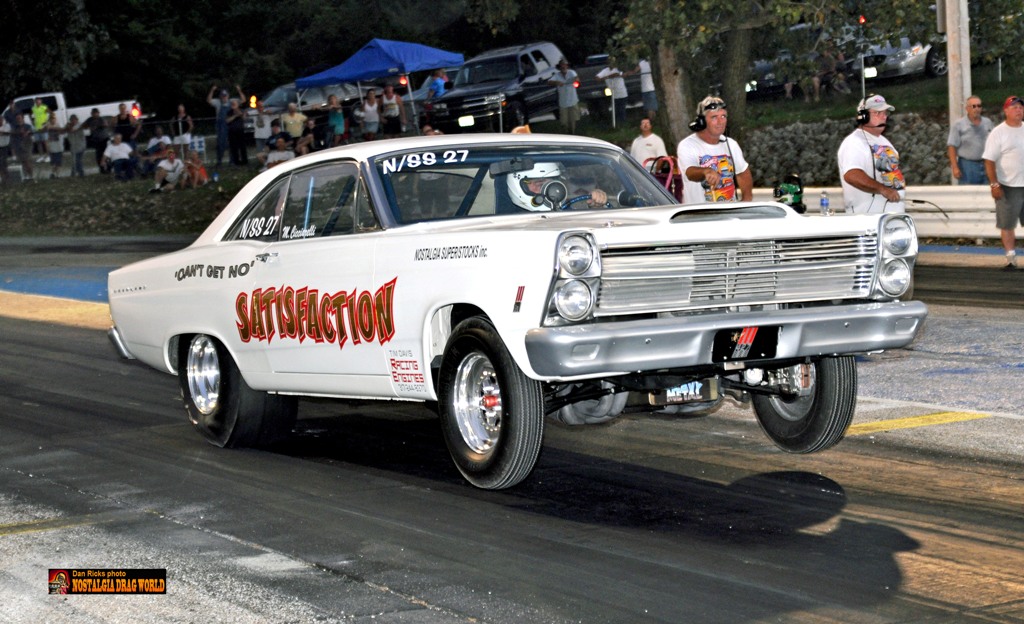 In His Own Words:

Bob Kleiner, Glendale, AZ “Bob owned the Auto Den in Dubuque, IA where the Fairlane was originally built into a race car in the late ‘80’s. I worked the parts counter during my summer days, and we would work late into the night on the project cars (including the Fairlane) at night. The Auto Den was well known as ’The’ Ford speed shop in Eastern Iowa….specializing in drag cars and pull trucks.”

Jerry Kehoe, Hopkinton, IA “Jerry was also an ‘association’ from the Auto Den. Jerry is a retired sign painter and old-school pin – striper. Jerry grew up street racing and drag racing in the ‘60s. Jerry is responsible for the graphics design and layout, and a lot of general knowledge of the ‘super-stock era.’”

The Pfohl’s, Dubuque, IA “Craig and Rich Pfohl are also from Dubuque, IA and I knew them well from the Auto Den. They had built there Sox and Martin Cuda in the mid 90’s, and had been running with the NSS group for a few years. When my car was finally running, the Pfohl’s ‘paved the way’ for me to participate with and eventually join the group. As anyone who has ever seen the Pfohl’s trackside presentation knows, I couldn’t have had any better NSS mentors.”

Dan Hare, Brownsburg, IN “Dan really helped with finishing-off the Fairlane. He has also been ‘invaluable’ for the various fabrication projects such as the custom stainless exhaust headers, suspension components, and fitment of the fiberglass body parts. Dan is an ‘Artist!’. I couldn’t do this without Dan’s expert help and guidance. Dan’s son, Buddy, has also become a valuable crew member, assisting in all trackside maintenance.”

Ron Catt, Indianapolis, IN “Ron, Dan, and myself all worked together at Walker Racing. Ron helped me pick the car up in Dubuque, and then helped me and Dan get it finished and ready for the track.”

Larry Quinn, Springfield, IL “Larry was a big influence on me. When I started racing with the NSS group, Larry took an interest in me because I was dedicated to racing with a 4-speed. But the biggest influence Larry had on me had to do with his driving style.

Larry has only one mode……WFO! Even though I had been around race cars since I was 10 years old, I had never seen anyone drive a race car so mercilessly in my life!! But it wasn’t just being brutal, Larry can effortlessly guide a seemingly out of control race car down the track, bouncing, swaying, and sliding all the way……without missing a beat.

People love to watch him….including me! Larry taught me how to drive ‘all out, and how to put on a good show’. Our cars our very closely matched now, and when we line up together, it’s really a lot of fun! Someone mentioned that when the Blue Pontiac and White Ford pull into the water box together, ‘It’s like two pit bulls fighting over a T-bone steak!!’”

Ray Paquet and Paul Adams “I’ve been very fortunate to befriend these two ‘great’ Super Stock Ford racers. I am currently using engine and driveline parts from both of them. But much more important than the hardware, is the ability to draw from the wisdom and experience they have shared with me. I greatly admire their accomplishments and one day I hope to follow in their footsteps and become a US National’s class champion!” 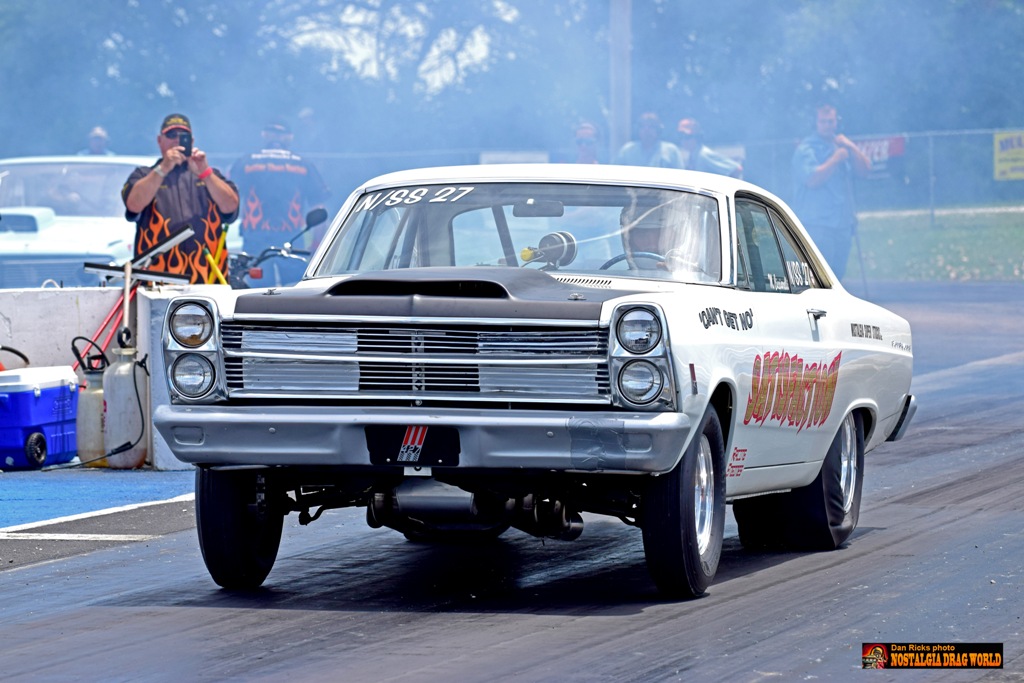 (Can’t Get No) ‘Satisfaction’

The (Can’t Get No) ‘Satisfaction’ 1966 Ford 427 Fairlane was assembled over many years with the purpose of capturing the essence and intentions that Ford Motor Co. had for its original factory-produced Super Stock cars – performance, quality, and a strong resemblance to the factory’s construction of the base car model.

His crew chief, Dan Hare. Dan works for Derrick Walker Racing as Chief Fabricator. He and his son, Buddy are great crew members

“We spent a lot of summer evenings after work maintaining and preparing the car for the next event,” said Cicciarelli. “We’re usually listening to classic rock-n-roll while keeping the neighbors awake with banging hammers and loud arguments.”

‘Satisfaction’ was originally a GT 390 car Cicciarelli bought for $600 in 1982, when both he and the car were 16 years old, financed by the sale of his 1970 429 Cobra Jet Torino. Young but knowing exactly what he wanted to accomplish, Cicciarelli also purchased a 427 center-oiler short block and a ‘slick-shifted’ Liberty top-loader 4-speed transmission with the balance of the Torino proceeds.

The transformation into a Super Stock replica began in 1983 at Bob Kleiner’s ‘Auto-Den’ speed shop in Dubuque, Iowa, “well before the Nostalgia Super Stock ‘Renaissance’,” said Cicciarelli. The project continued more than a decade as he finished college and started a career in open-wheel racing.

In 1996, Cicciarelli retrieved ‘Satisfaction’ and brought it to Indianapolis for the finishing work. Although the process had taken a very long time, the car he had dreamed about was finally done. “I still remember sitting curbside on my Schwinn Orange-Krate and watching an ‘earth-shakin’, ‘gear-bangin’, 4-speed 427 Fairlane devour a real 70 Hemi ’Cuda in a genuine block-long 1970’s street race,” said Cicciarelli. (when asked if this story was really true, Cicciarelli replied ‘Well.., maybe it was just a 390 Fairlane……).