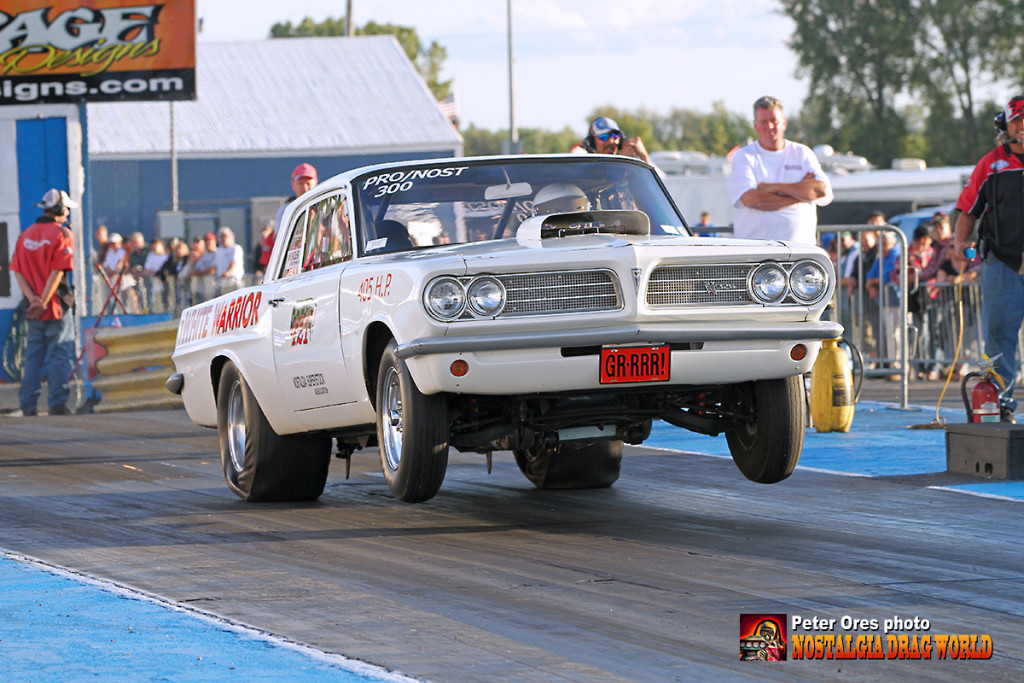 Every time Keppler makes a run in the ’63 Pontiac Tempest, ‘White Warrior’, he’s both continuing Johnson’s experience and making history of his own, keeping the Warrior’s heritage intact but also adding his own ownership is a balance Keppler is well aware of.

“I was a Ford guy but my brother had a Grand Am,” said Keppler. “In the early 70’s we played around with it. The Pontiacs also seemed like they were the underdogs.”

A downstate ‘flatlander’ from Spaulding, Illinois, Keppler eventually connected with the Chicago Pontiac crowd which included Joe Zajac, Larry Kaufman, Rick Johnson and Dave Johnson along with Larry Quinn of Springfield. Zajac, a long-time Nostalgia Super Stock Inc. president and current vice-president, provided some biographical background about Dave Johnson, who was also vice-president of the organization for a time.

But that wasn’t fast enough for Johnson.

“He had this ‘want’ to go faster, and was very determined,” continued Zajac. “Some Wenzler heads went on and it didn’t take long, those heads really made a difference in air flow.”

Johnson was so motivated that when he went looking for an intake manifold at the same level as the heads and unable to find one, he paid $1,000 to rent a sheet metal unit for a season, took it to a patternmaker and then eventually took the vendor-manufactured tooling to Indy Cylinder Head, which made the first casting. Those changes got the all-steel ‘Warrior’ into the 10’s but, of course, the quest continued.

“He started into the body with ‘glass panels and doors and quickly went into the 9’s,” said Zajac. “One of the motor rebuilds had titanium connecting rods. He threw some money at that thing. The car was always (painted) white, he didn’t care much about appearance. At one time he put on some monoque wheels that were flat black. If he could find something that would add 15 or 20 horsepower, he’d spend the money.”

Eventually the car broke into the 8’s and was consistent in the 8.90’s. Johnson also ran in the National Muscle Car Association’s Pro Nostalgia class until that category was cancelled. “The last race was in 1997 and I recall seeing him and the car at a show at Joliet in 2008,” said Zajac. Johnson passed away in 2009. 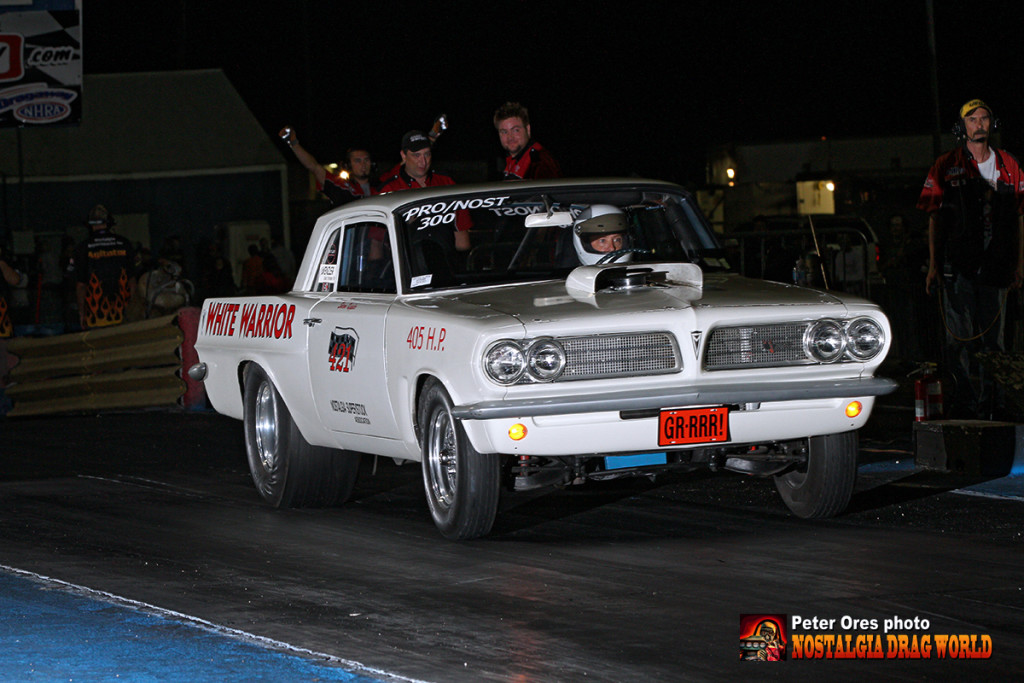 Meanwhile, Keppler, a professional mechanic, while driving back from a race at Central States Dragway in Havana, Illinois, heard from a friend that the ‘White Warrior’ might be for sale.

“I’ve spent a lot of time running in the ‘Dust Bowl’ there,” he said. At the time, the car had a 528 cubic inch engine with a JAT aluminum intake and allegedly would run in the 9.60’s. “It’s had a number of different engines in it,” said Keppler. “They expected low 9’s but had some trouble with the crank trigger and other parts.”

Another iron block engine went in the 10.40’s but Keppler said he got it to run 9.40’s by pulling the timing back. “It was supposed to be a high-revving combination but actually was a semi-street engine,” Keppler explained. “I would run (fellow club member) Gene Devening in the low 11’s. We had some really close races.”

Keppler has been in the fast-car game since his late teens and said he has had a handful of cars, including a couple of ’70 GTO 4-speeds. He now also has a 1978 Catalina. “It’s a plain Jane white that runs in the 12‘s,” he said. “I drove it once last year.” 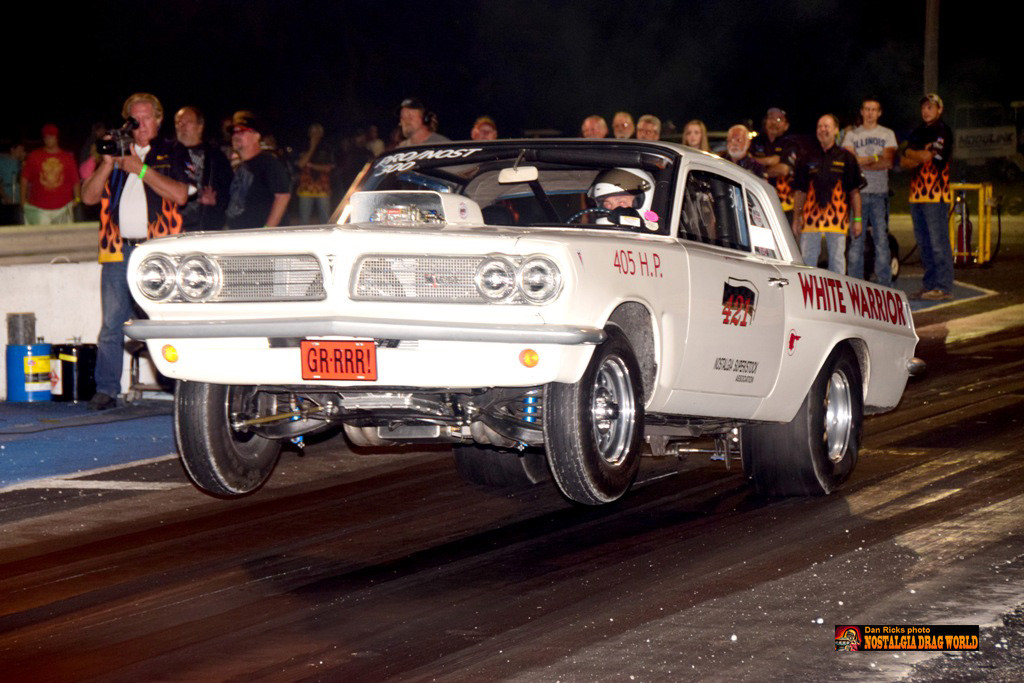 When Keppler was about 12, he recalls his father driving a ’62 Catalina against a ’62 Chevrolet on a track set up in a stone quarry where he tried to be the flagman. “I started to but then I was told to get out of the way,” he said. “I guess when you’re young, that’s the way you’re looked at.”

Now Keppler is looked at from an entirely different frame of reference. He joined the club in 2010 but had not been at the meeting and learned of his membership from Quinn.

In 2013, he and the ‘White Warrior’ won The Best of Pontiac race at Cordova, an event organized by Quinn; and he has come to appreciate the friendships made and good times experienced. “Against Lenny (Len Grimsley Jr., ’64 Plymouth ‘Fire and Faith’), when we’re running side-by-side, it feels like we’re really doing something,” said Keppler. “At Havana in a race against Rich (club president Rich Berlisk, ’63 Plymouth Asphalt Angel) I made a burnout across the starting line and when I got back I looked at him through the side window and it was like ‘whoops’,” he continued. “I could get him off the line but he clipped me at the finish line. We’ve had some really good close races.”

“We don’t have tomorrow but we had yesterday,” The Supremes sang in their song ‘Touch Me in the Morning.’ However, for as long as he has the ‘White Warrior,’ Keppler has the better of that verse; he has both.

“It’s an honor to run with these guys,” he said. 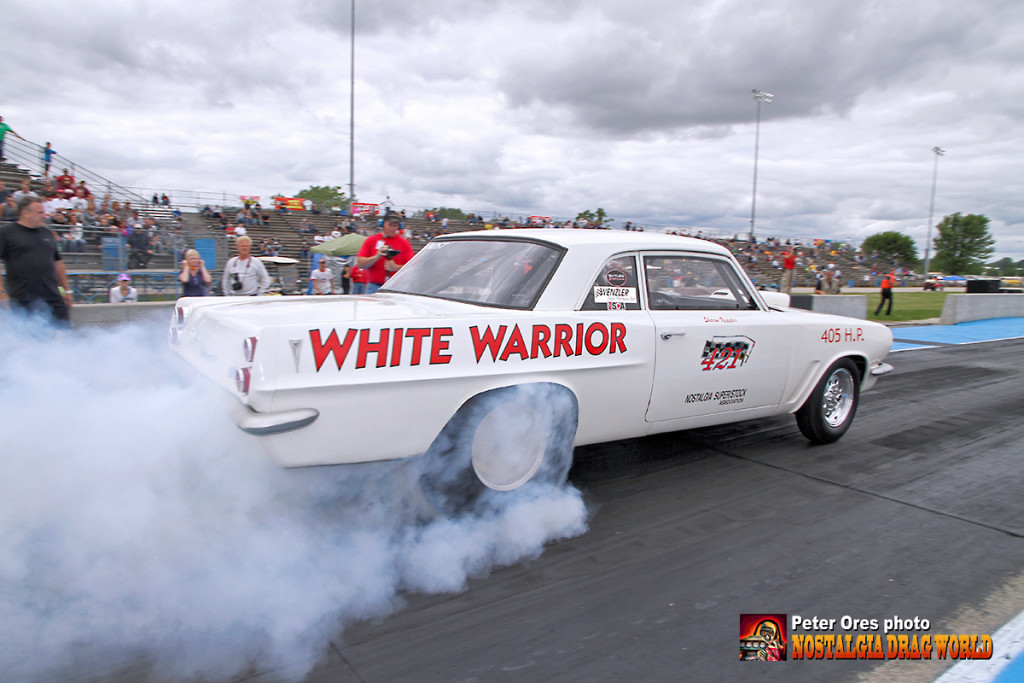 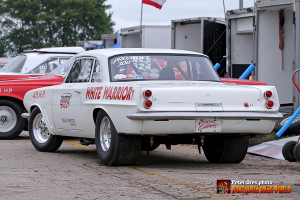 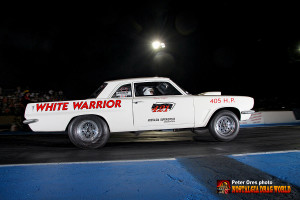 One of the quickest and highly engineered NSS cars in existence, the “White Warrior’ 1963 Pontiac Tempest is both a tribute to the technical skill and personal determination of the late Dave Johnson and the faithful and enduring stewardship of Ernie and Sharon Keppler.

Owned and sponsored by Ernie and Sharon Keppler of Spaulding, Illinois. “Covering all the expenses with no sponsors makes it tough to keep up with the fast guys,” said Ernie Keppler.

A mechanic by trade, Keppler has been involved in the science and art of the automotive business since he was a teenager. Over the years he has gained extensive experience in design, maintenance and repair, driving and drag racing. Soft-spoken and unfailingly polite, Keppler has a competitive spirit at least equal to that of the initial owner. “One time Rick Johnson cut a light so good that I thought my car had stalled,” said Keppler. “But after, I went over and guaranteed him that it wouldn’t happen again.”

A 1963 Pontiac Tempest, ‘White Warrior’, was acquired by the late Dave Johnson of Chicago, who step-by-step built the car into one of quickest NSS cars in the country. Keppler purchased the car in 2009 and has raced and maintained the car with the good stewardship it deserves.