UNION GROVE, Wis. – This event was short but sweet.

The two-day spring nostalgia event at Great Lakes Dragaway, now in its third season as the Memorial Day Classic, was run just one day this year due to a complete rainout on the second day.

But what fine weather for a Saturday show it was. Sunny, mild and dry with dew points in the 40’s and DA’s in the teens made ideal atmospheric conditions for making horsepower and traction, especially into the evening.

An 11-car NSS® Inc. field joined with other groups to put on a eight-hour classic, which provided full entertainment for the fans who filled the bleachers and enjoyed a snappy show which finished on time at 10 p.m. 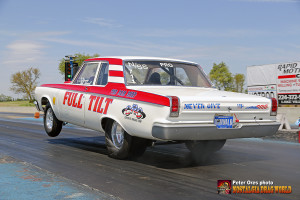 Here is “FULL TILT” a 1965 Dodge on its maiden voyage.
This is the first event out with this newly finished NSS® car. Its owned and driven by Milt Schreindl of Waterford, WI.

NSS® Inc. ran four sessions, highlighted by some close match racing and the debut of Milt Schreindl’s ’65 Dodge Coronet named ‘Full Tilt’ with a graphic of a filled beer mug for those whose didn’t catch the wordplay.

Schreindl, father of Spencer Schreindl and who made a highlight reel of his own, made all four sessions, a rarity for a first-time machine. Milt Schreindl was very consistent around the 10.40 mark, including identical 10.381 times in the last two sessions.

“At first we had to do a lot of coaching because it had it been so long since he had driven a car in competition,” said Craig Schreindl, another son. “He was more than a little amped but eventually settled down and got into the routine very well.” 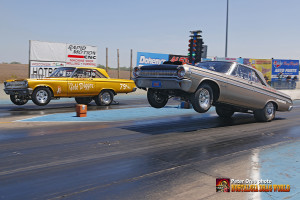 Spence Schreindl of Oconomowoc, WI in the “MAX WEDGIE” 1964 Dodge,
showin/ the Grinwald “Gold Digger” “the way to the sky”

Actually the trouble had started at the season-opener at Sikeston Mo., where the starter had worked loose and Rousset had to pull the fasteners back into place. But apparently at least one tooth had been damaged in the process and when Rousset did his pre-race maintenance he discovered the damage. 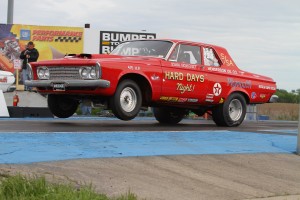 John Rousett of Columbia,MO works on another time slip at the Legendary Great Lakes Dragaway
in the “HARD DAYS NIGHT” 1963 Plymouth. (file photo)

“I have a new converter on the way but it didn’t arrive in time,” said Rousset, who was able to make just one test-and-tune pass. “It sometimes will work with one tooth missing but with two gone it just spins and won’t engage.”

It was a rare occasion for Rousset to be on the sidelines and deprived the field of one of its most consistent and close match-ups with rival Doug Henderson. 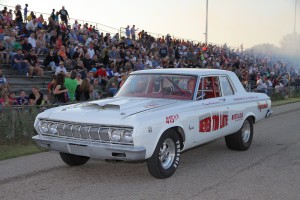 Doug Henderson’s smile is “NEVER TOO LATE” after making a good pass
in front of a large crowd at Great Lakes Dragaway. (file photo)

However, Henderson made the most of early test-and-tunes and then ran all four official sessions for a total of 14 runs, an average on one an hour during total track time. “This is what we come to do,” said Henderson, whose best clock came in the first session at 10.178 at 130.41 mph. “I like to drive and the fans like to watch the car run down the track.” 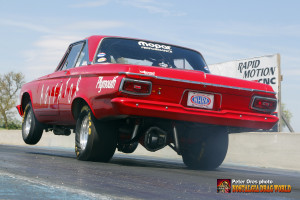 Semi retired engine builder Dale Chenoweth of Morton, IL
in his 1964 Plymouth “AGITATOR” gettin some “wrinkle” in the slicks.

Henderson and the ’64 ‘Never Too Late’ Plymouth alternated against Dale Chenoweth, who posted a 9.912 at 134.04 mph best in the second session in his ‘Agitator’ ’64 Plymouth. 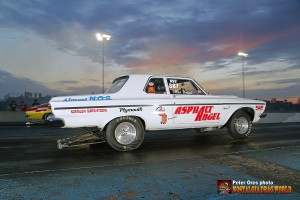 Rich Berlisk of Hartland,Wi taking a sunset cruise in the “ASPHALT ANGEL”

Continuing to working in solving an intermittent low oil pressure problem, club president Rich Berlisk came back with some vacuum pump modifications that straightened out the high rpm decrease in the ’63 Plymouth ‘Asphalt Angel’ and paired against Mike Jessup’s beautiful ’68 Hemi ‘Cuda. The two ran three sessions in the 9.70’s and as important for Berlisk, his oil pressure also stayed in the 70’s. 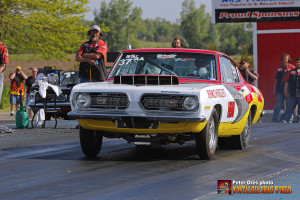 This beautiful 1968 HEMI Barracuda is driven and owned by Mike Jessup of Homer Glen, IL. 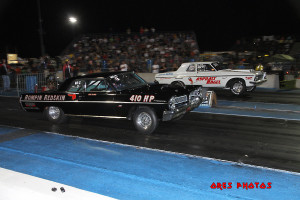 Club vice president Joe Zajac and the ‘Rompin’ Redskin’ ’63 Pontiac arrived for the second session and clocked a 9.15 at 147.49 mph before breaking a rocker arm on a 9.210 effort in the third stanza.

The Seltzer and White ‘We Haul’ ’65 Chevelle was ready in the second session, ripping off an event-low 8.574 at 154.84 mph on a 0.069 reaction time against the 0.4 pro ‘tree. But then the right rear shock tore loose from its upper mount and subsequent fixes failed to restore the potential. 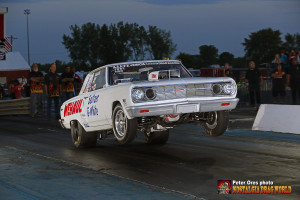 Bill White of DeMotte, IN in the Seltzer & White “WE HAUL” 1965 Chevelle “lettin it fly’

The feature pairing was between John Grinwald’s ’65 Dodge Coronet ‘My Gold Digger’ altered wheelbase car and Spencer Schreindl’s ‘ ‘Max Wedgie ’64 Dodge Polara, which was engineered into a 0.2 elapsed time improvement over the off-season.

“This was a great day, the most fun I’ve ever had at the track,” said Schreindl. “How could anyone not enjoy action like this? This is the best-ever.” 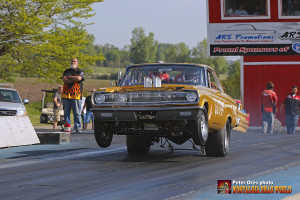 “GOLD DIGGER” thats the name of this 1965 Dodge Hemi Injected altered wheel base
owned and operated by John Grinwald of Watertown, WI.

“This is about as good as it gets,” said Grinwald. “We can’t tell who will win any one race between us but we know that every race we do will be a good one for us and the spectators.”

The rain started falling in the early morning hours and by 9 a.m. it was clear that there would be no mercy from the moisture.