Union Grove, WI, July 25-26 2015…… Mike Seltzer might have been a little too hard on himself considering it was the difficult sport of drag racing – but then again perhaps not too much.

“This is exactly what I should get for putting it on ‘kill,’” said the disappointed car owner/tuner. 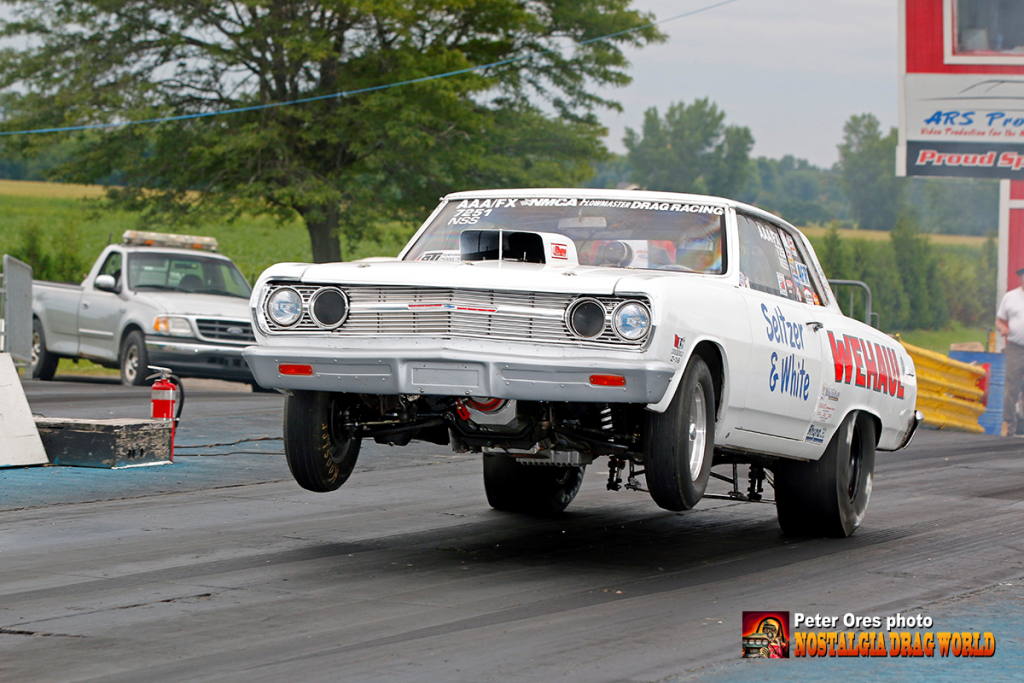 This is the longtime racing partnership of Mike Seltzer and Bill White. Bill is the driver and is “getting it up”.

After working all weekend to get the Seltzer and White ‘We Haul’ 1965 Chevelle back into its usual elapsed time zone, the two blew through what the track would hold and Bill White slipped and slid to 9.314 at 144.50 mph in the match race final against the ‘Keepin’ The Faith’ 1963 Plymouth driven by Paul Habura, who clocked his second-best run of the two-day Mopar/American Motors Festival at Great Lakes Dragaway July 25 and 26. 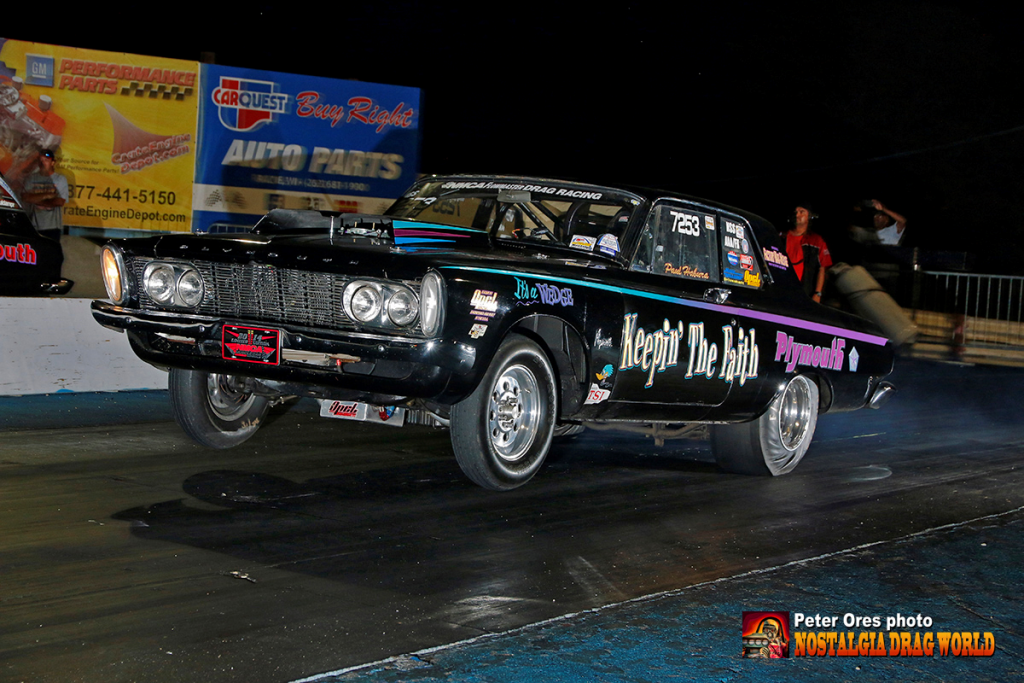 Paul Habura from Addison, IL in the “Keeping The Faith” 1963 Plymouth “lighting up the night”.

White went 8.791 at 146.96 in the second session to set up the final showdown after they finally found a bent throttle transfer rod under the gas pedal to end almost two days of the frustration of knowing they shouldn’t have been running in the nines.

Meanwhile, Habura was also laboring to get the right setup for the tricky surface and schizophrenic atmosphere, which ranged from more than 4000-foot density altitude to 1500 feet at times. “I’ve set the bars dead flat,” he said after Sunday’s first session.

The group ran a total of eight sessions, five on Saturday and the remaining three starting at 11:00 a.m. on Sunday as rain again threatened but this time wasn’t quite able to wash yet another show this season.

“It was good to get this one in,” said NSS® Inc. president Rich Berlisk, who also with Habura’s help, accomplished some problem solving on his “Asphalt Angel’ 1963 Plymouth by replacing a set of cranky carburetors that had started acting out the previous week at Indianapolis. “The boys were ready to race.” 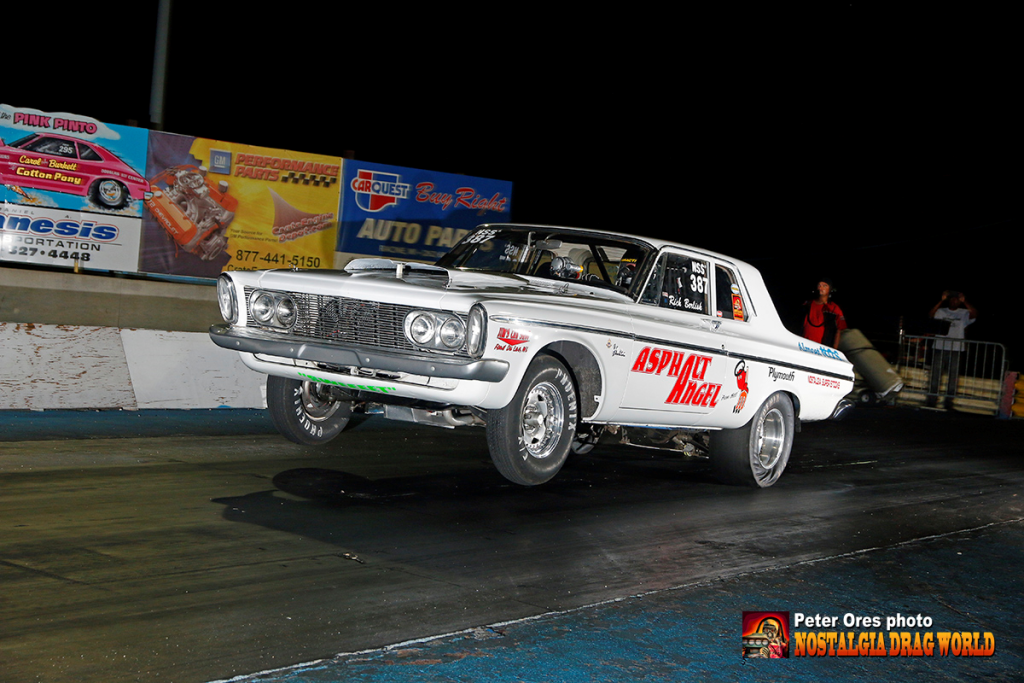 Rich Berlisk of Hartland, WI. Flying the Asphalt Angel into the “still of the night”. 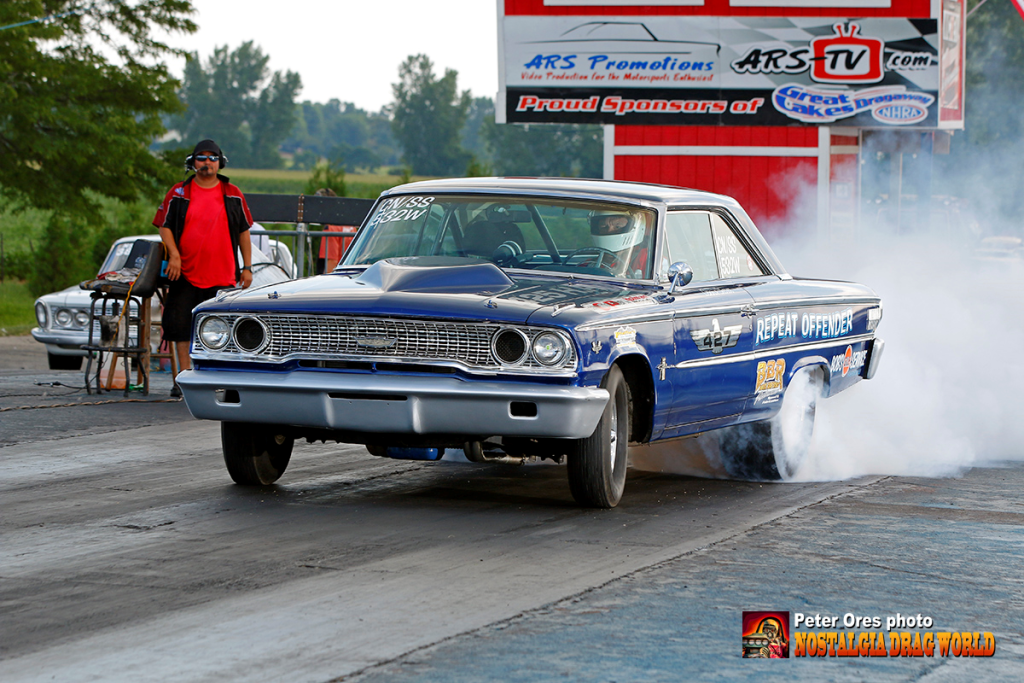 Dennis Scherer, Roscoe, IL. in the “Repeat Offender” doing what he’s good at “ laying down the rubber.”

Dennis Sherer made his first event in a while and ran 10.80’s when his 1963 Ford Galaxie ‘Repeat Offender’ would grab the track. “It’s great to be running again,” he said. 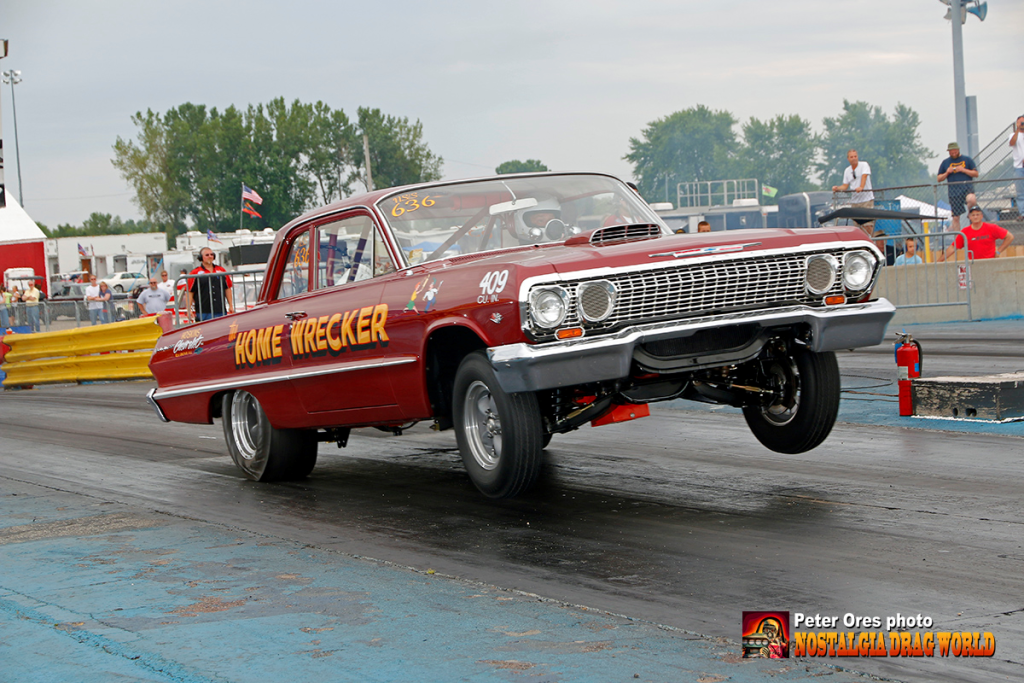 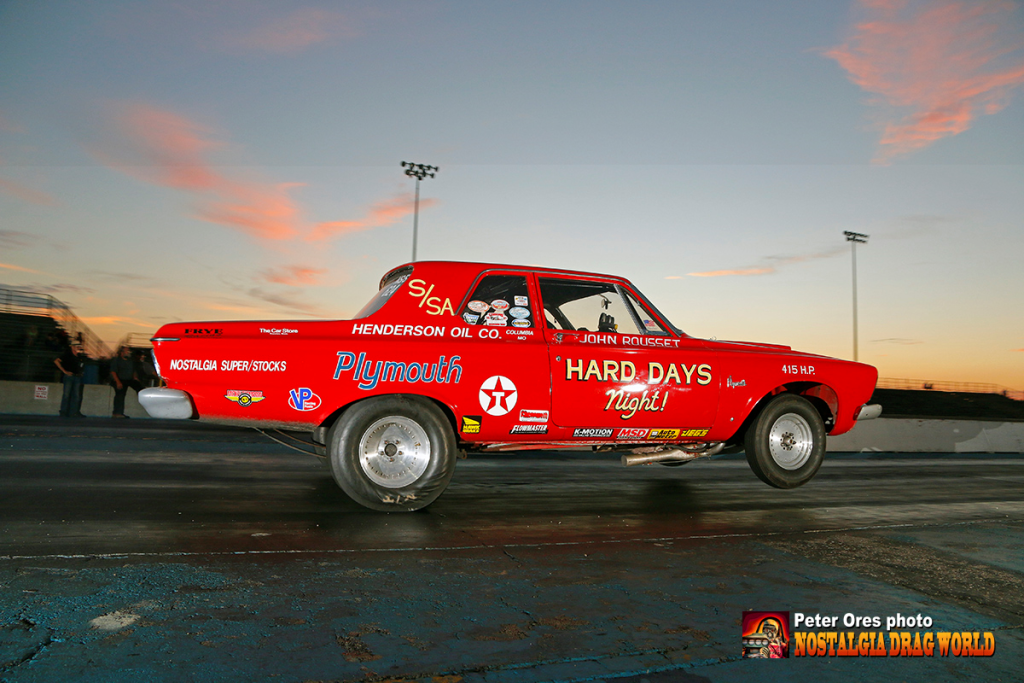 “They made a mistake and shipped me a tight eight-inch instead of the correct nine-inch,” he said. “That’s absolutely as fast as it can go this way; it blows right through the motor’s 4000 rpm torque range.

“The first time it happened, I thought maybe something went wrong in the tach or wiring because the shift light stays on all the time. They will send me a new one but it’s going to take a couple of weeks until I can get it out of the car.”

Rousset rumbled with veteran/rookie Milt Schreindl’s ‘Full Tilt’ 1965 Dodge Coronet in the third event of his first season as a member, with a 10.364 at 127.40 mph best. Some black-tipped spark plugs taken out after the event showed some carburetor tuning work could also be done to his motor.

Len Grimsley Jr. continued his bracket-like consistency from Indy when his 1964 Plymouth ‘Fire and Faith’ put down a 9.134 at 148.17 best in Sunday’s last run. 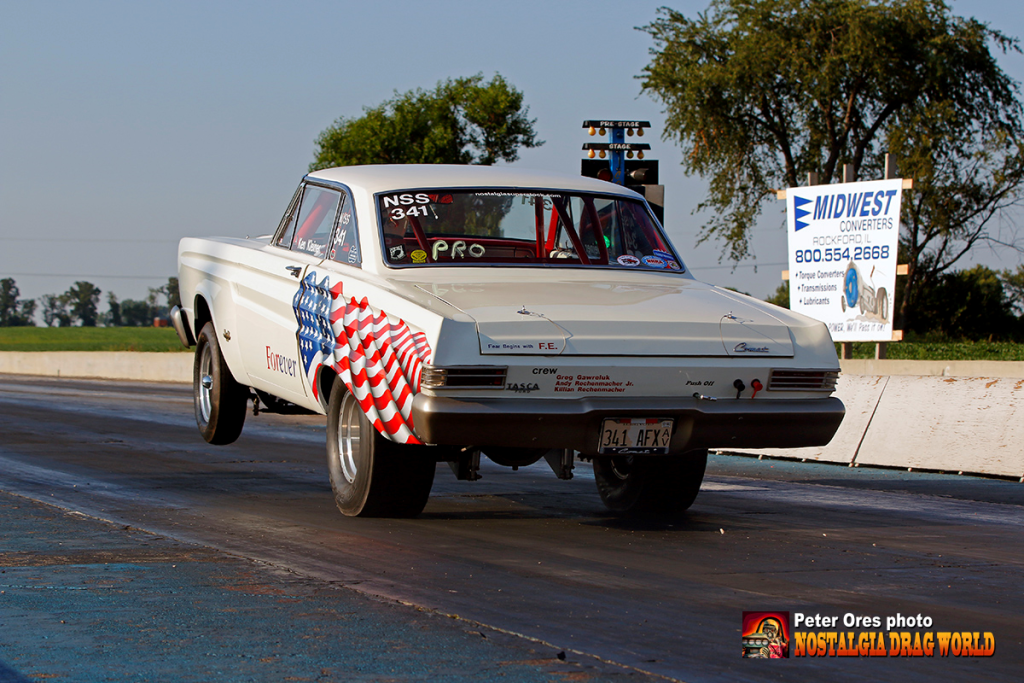 Ken Kleiner in the Comet named “Forever” creating air space beneath the tires!

Free lancer Mike Therrin ran in Sunday’s last two sessions as a guest with his Hemi-powered ‘Chi-Town Shaker’ 1969 Dodge Dart, going a 10.288 at 128.53 best in a mostly stock machine. 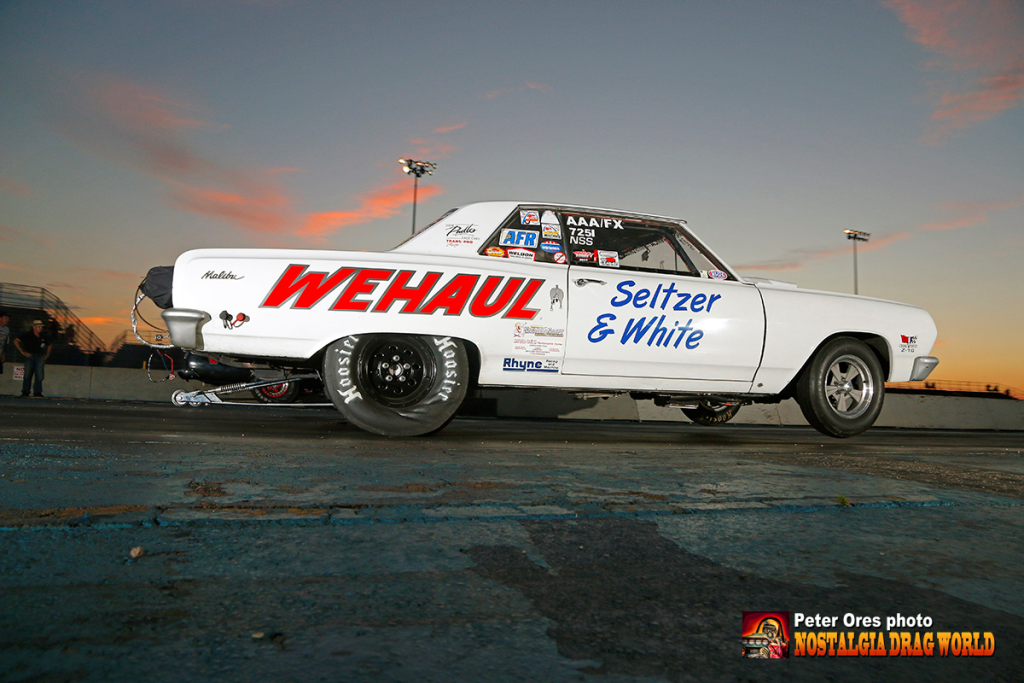 Sunset with We Haul/ Bill White

And even after the racing ended, Seltzer and White had one more problem to solve. They were all packed up and ready to leave when some members called them out of their motor home and pointed out a flat left front tire, off the rim of the wheel.

However, within a half hour, they were able to complete the repair and were more than happy to be rolling down the road and leaving behind a hard lesson. 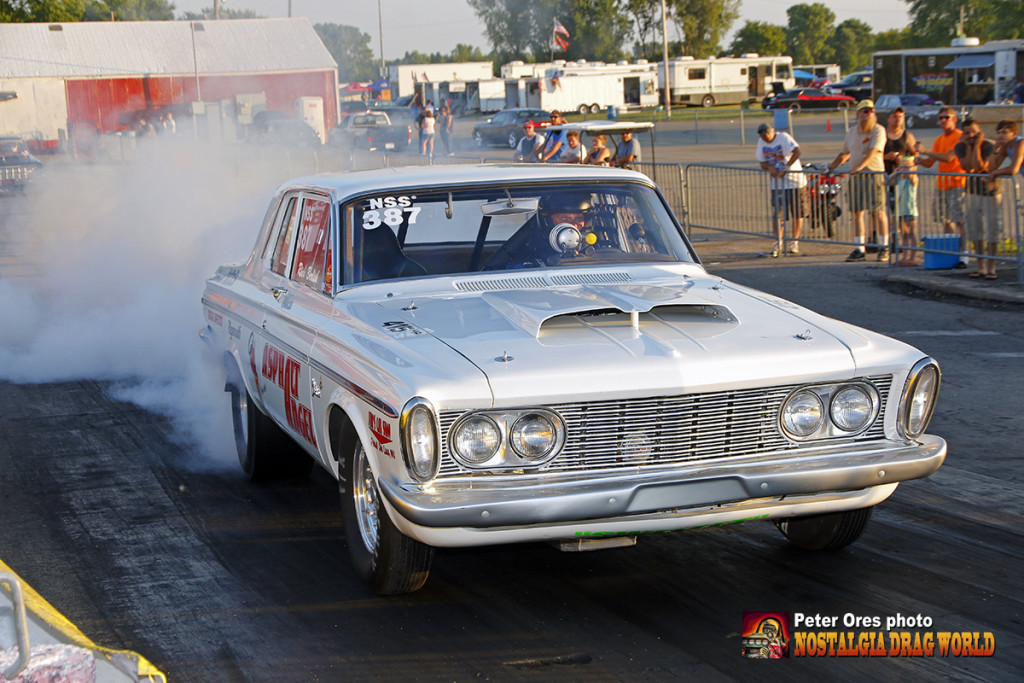 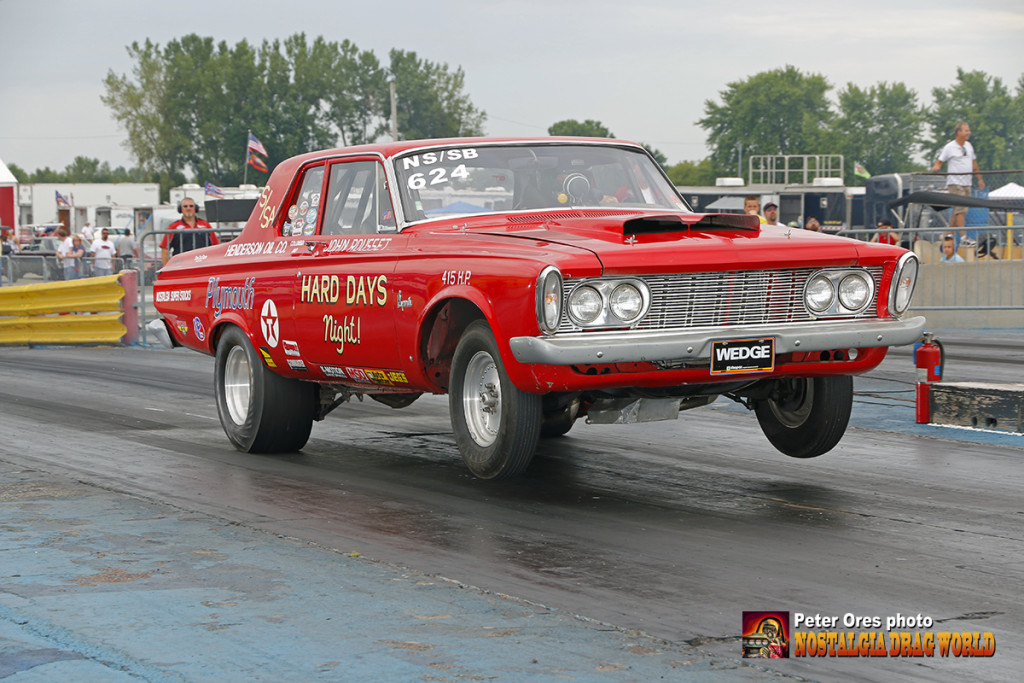 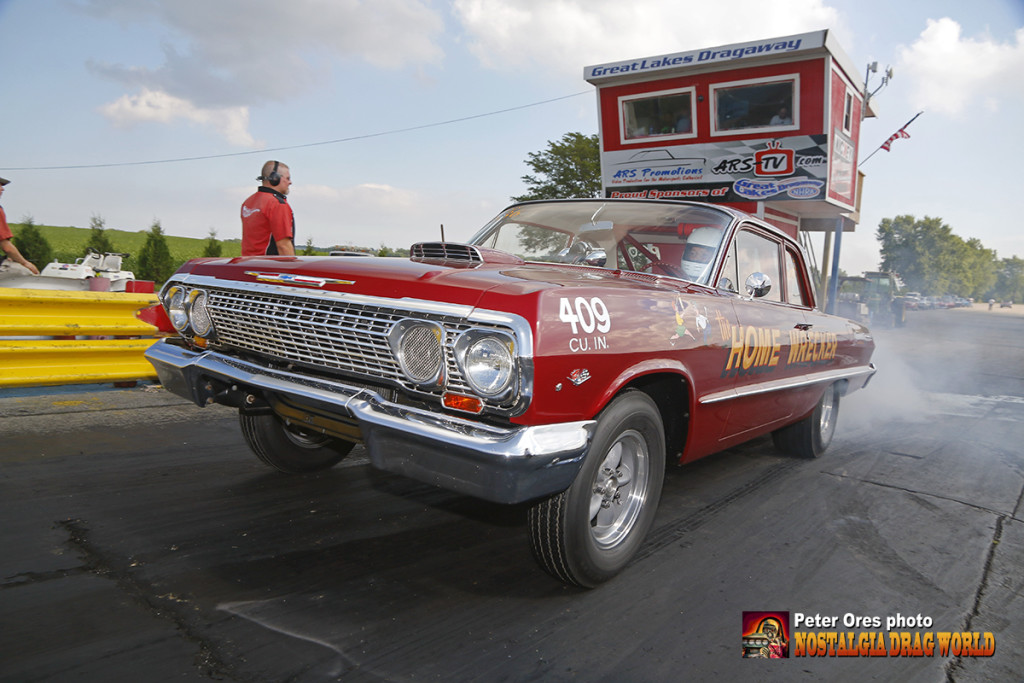 Dan Hradisky working the clutch and four speed coming out of the water. 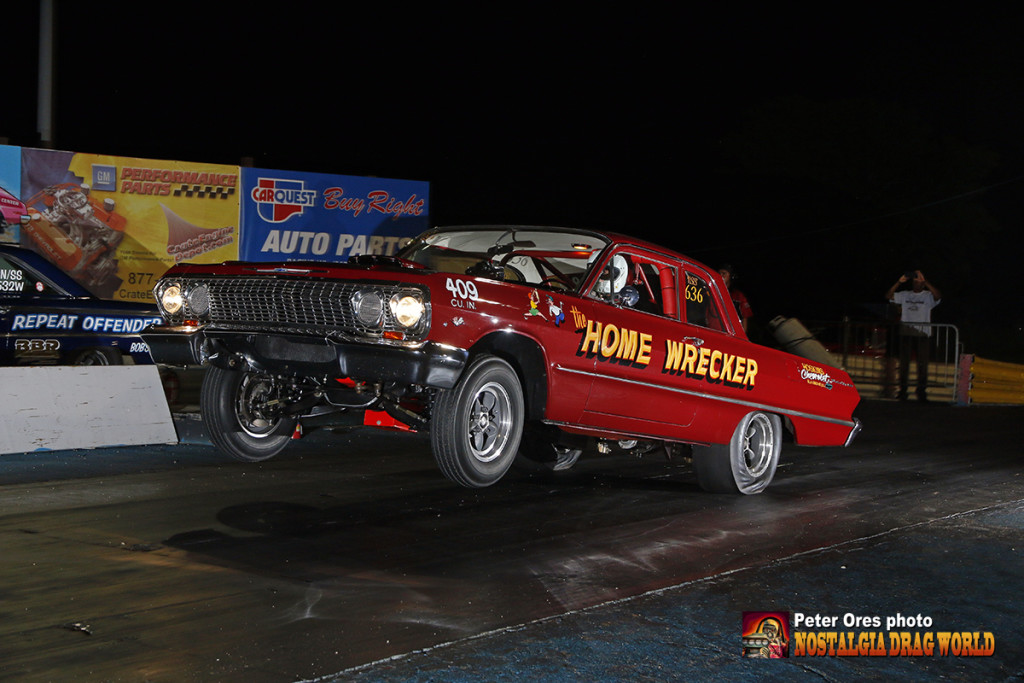 Dan Hradisky getting good air under the tires! 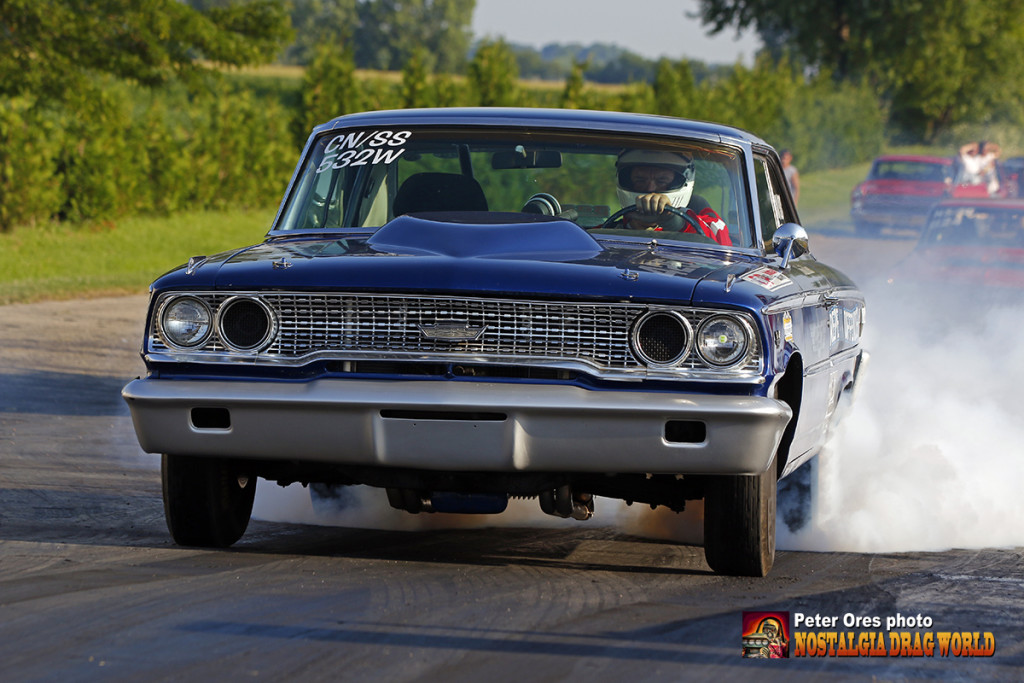 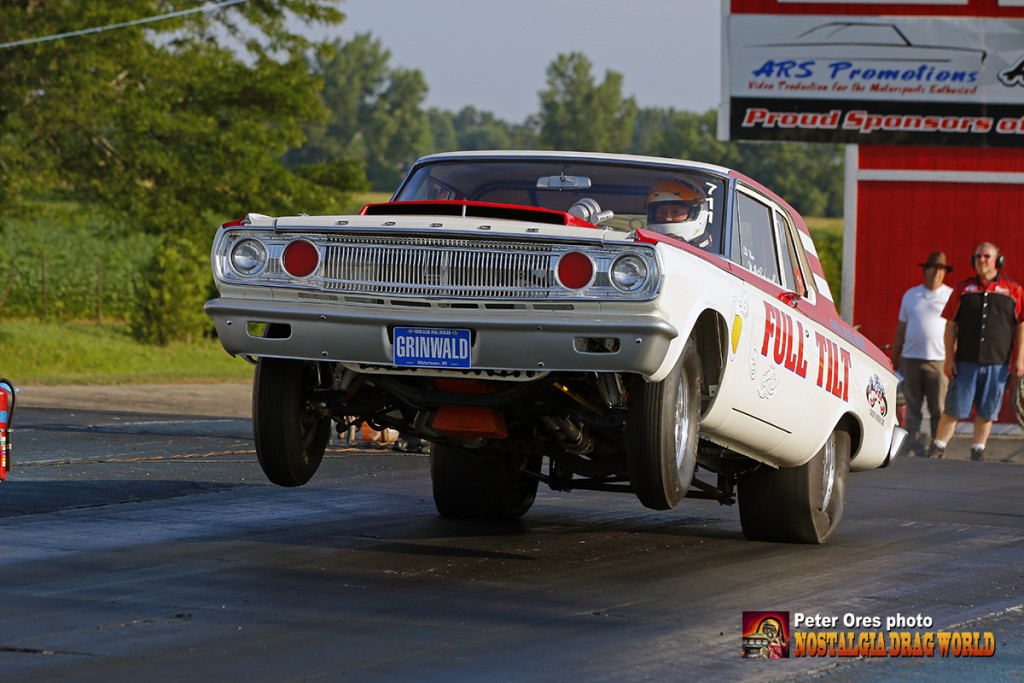 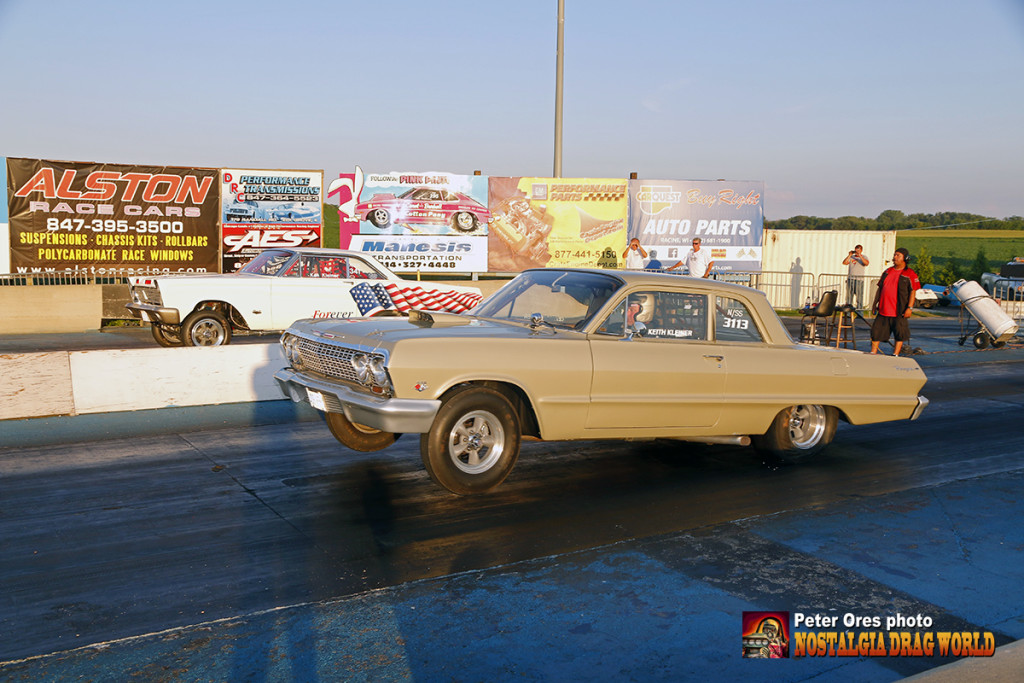 Ken Kleiner (far lane) in his 1965 Mercury Comet altered wheelbase takes on his son Keith Kleiner in his 1963 Chevy 409.