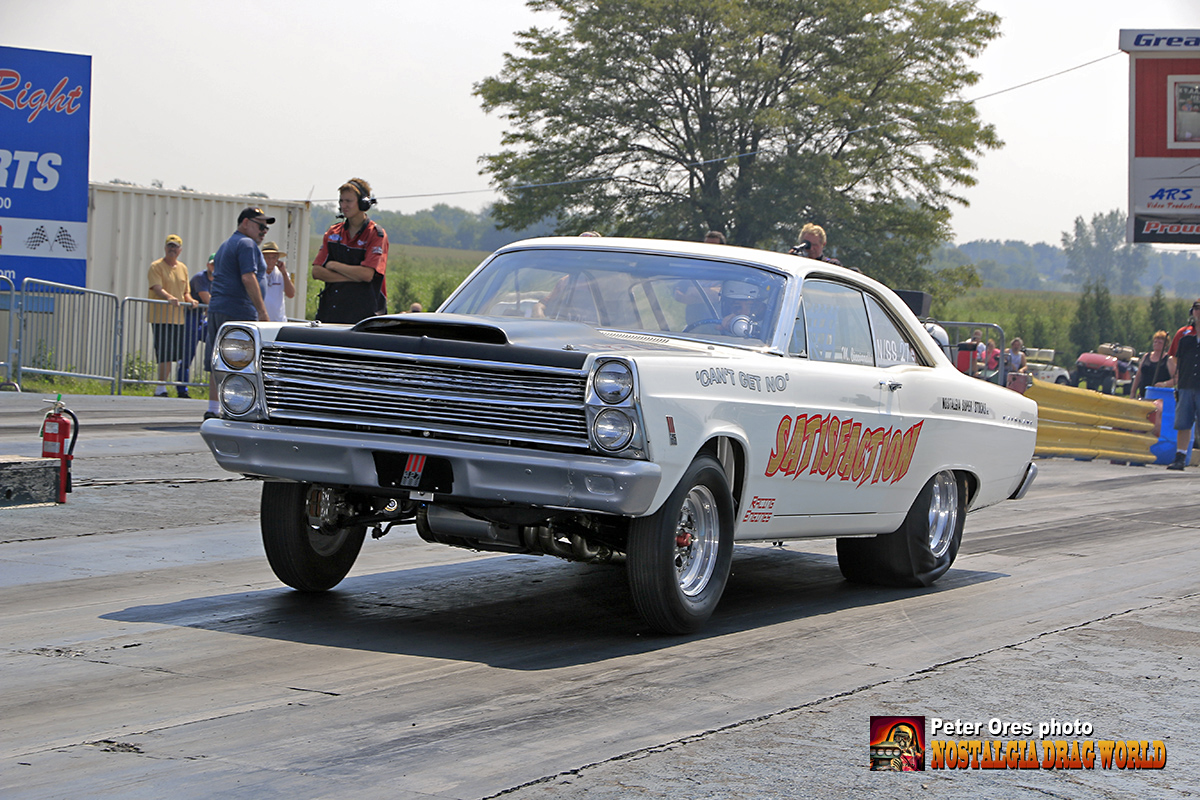 So that’s what the first paragraphs of this story will be. As described in earlier stories, after battling both the torque converter manufacturer and the shipping company, John Rousset and the ‘Hard Days Night’ 1964 Plymouth went 10.033 at 132.75 mph during Sunday’s 5:30 p.m. final session.

“I was hoping to break below 10.00 flat,” said Rousset, who runs a factory original crossram intake and Carter carburetors. He figures the current converter is still 700 rpm too high for the engine’s torque range, “The air wasn’t quite there either,” he said. “But the 9.99 will come soon.” That accomplishment would be remarkable with that intake combination, possibly the first time in NSS history.

Earlier, in the 2:05 p.m. Sunday session, Mike Cicciarelli and the ‘(Can’t Get No) Satisfaction’ 1966 Ford Fairlane posted 8.78 for his all-time personal and car best.

Both Rousset’s and Cicciarelli’s numbers were recorded despite air ambient temperatures in the low 90’s and humidity’s measured by dew points in the low 70’s, RH’s of 60 percent and water grains in the 120 vapor pressure range. 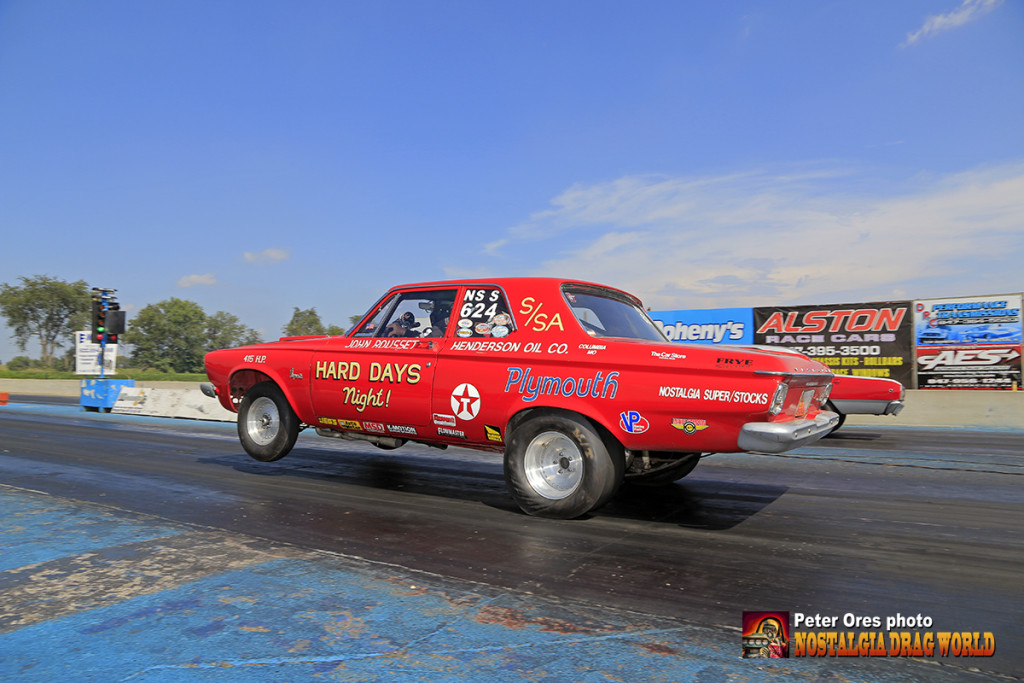 John Rousset getting some air space under the rubber 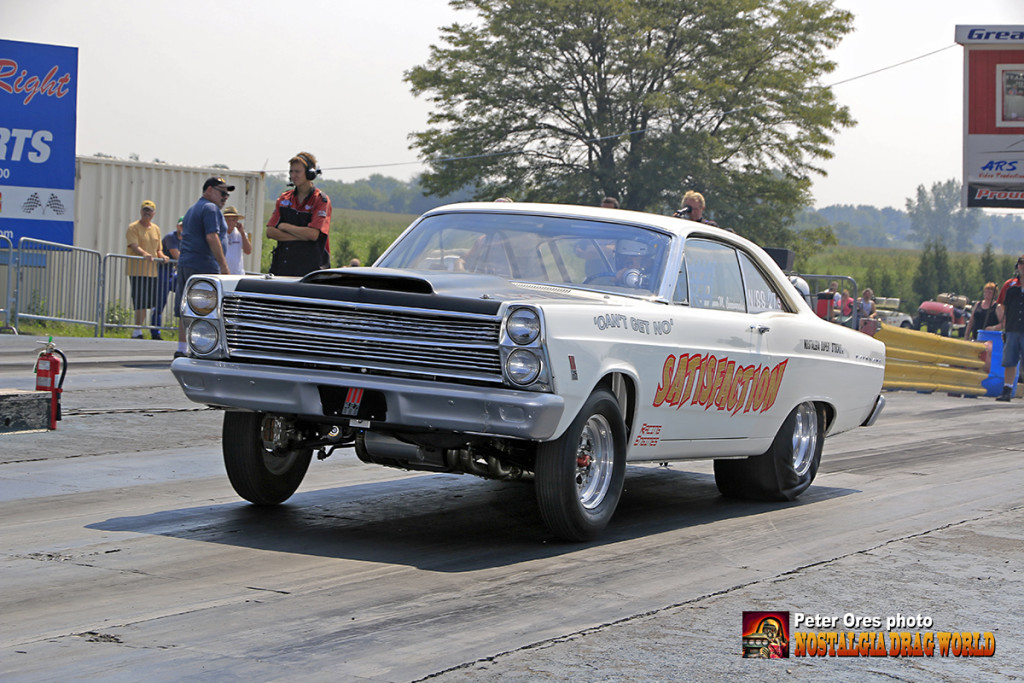 Mike Ciccarelli on his way to an 8 second pass

For Cicciarelli, the path was somewhat easier. A suspension engineer for KV Racing Technologies Racing in the Indy Car category, he usually has to postpone his drag racing for late season, so this event was his first of the year. Arriving from his home in Indianapolis in time for Saturday’s second session, he showed his potential by clocking an 8.79. But a minor irritation was a broken reverse lockout lever, which he reached into the car for and brought out to show me after the run. “Not so bad,” I said. “Some bubble gum and duct tape and you’ll be good to go.” He wisely ignored my suggestion.

Before he got his 8.78 on Sunday, though, he had to survive the Saturday Night Follies, which delays followed exponentially from the usual oil downs, breakage and general mayhem to the unusual mixture of classes such as the Chicago Wise Guys Pro Mod series, E-85, fuel motorcycles, junior dragsters, snowmobiles and jets. 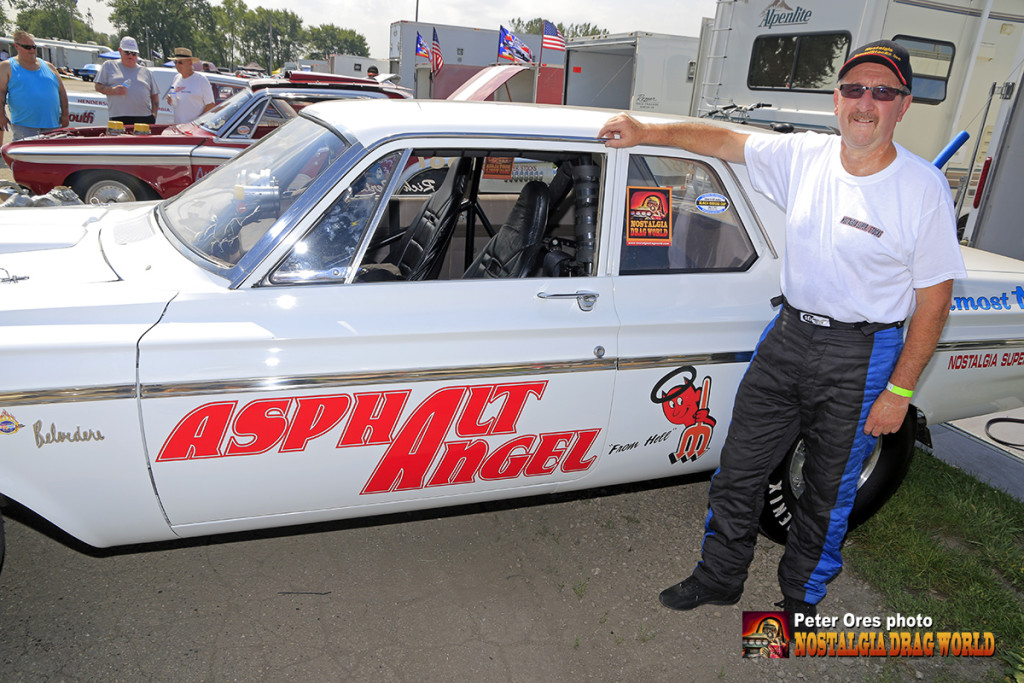 Rich Berlisk from Hartland, WI with the “Asphalt Angel” 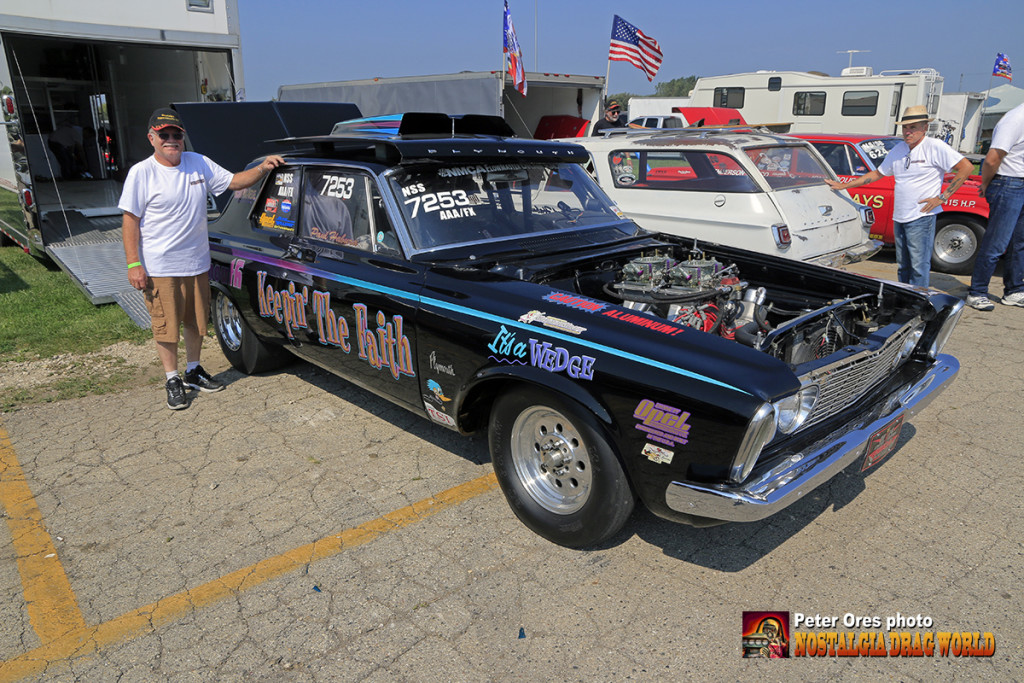 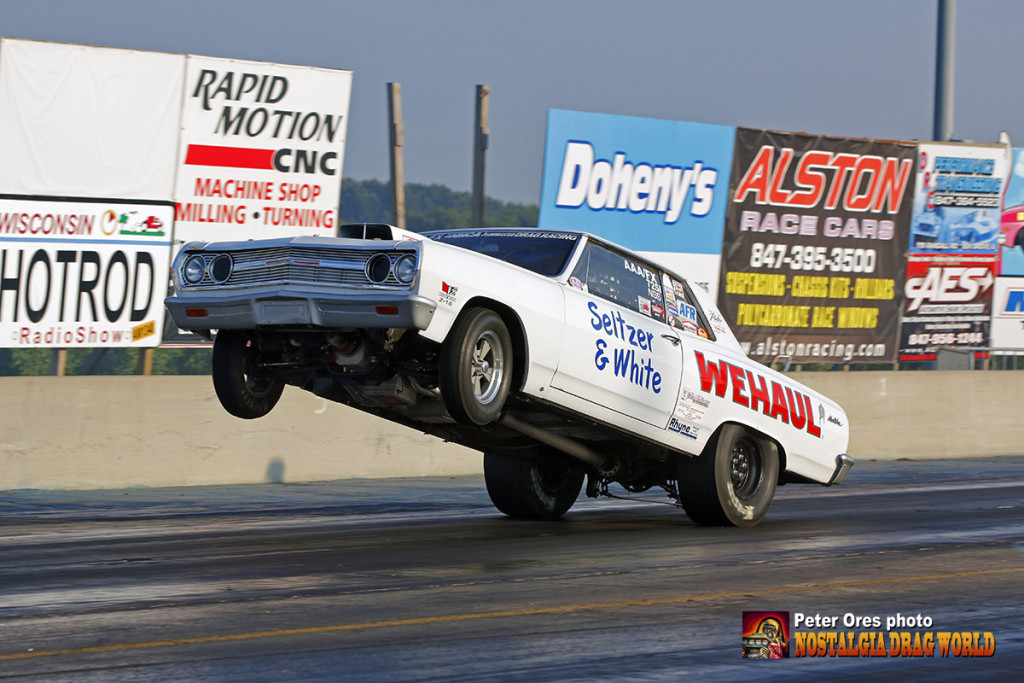 In the last pair of the last session, Paul Habura in the ‘Keepin’ The Faith’ 1963 Plymouth turned around a second session loss to Bill White’s ‘We Haul’ 1965 Chevelle, setting low elapsed time and top speed of the event at 8.60 and 155.87 mph. White had edged Habura 8.77 to 8.83 in the second session. A friend of the Grimsley Gang, Rudy Haverkamp, and his 1970 Dodge Dart filled one gap in the line-up, running three passes in the 8.80’s. 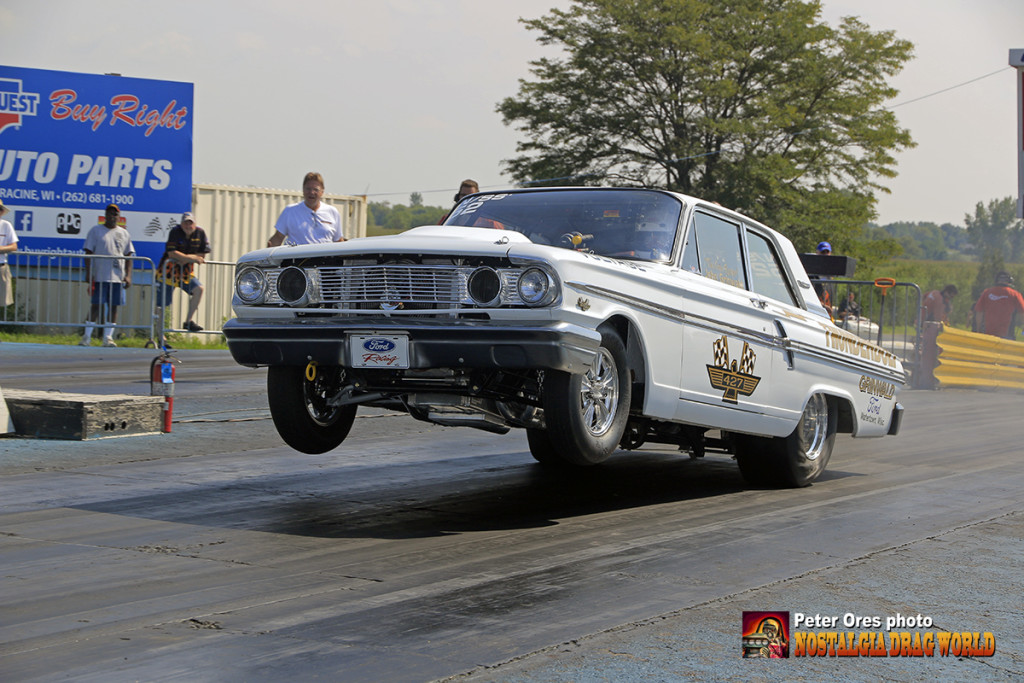 And finally, the patience and determination award goes to Jeff Wick, who has taken on the task of sorting out John Grinwald’s third car, the ‘High Voltage’ 1964 Ford Thunderbolt. A four speed manual transmission machine, the ‘Bolt’s’ slicks had been hitting the track so hard upon launch, with the front end high and the back skating on the wheelie bars, the motor would shut off and the car came back down with a bang.

“It’s a matter of taking a little more clutch out each time until we can get it under control,” said Wick, a former Pro Stock driver. By the final session, Wick had calmed the ‘Bolt’s’ action down to the point it would still bog after coming back down but then was able to recover enough for a 9.50 at 152.25 mph pass. 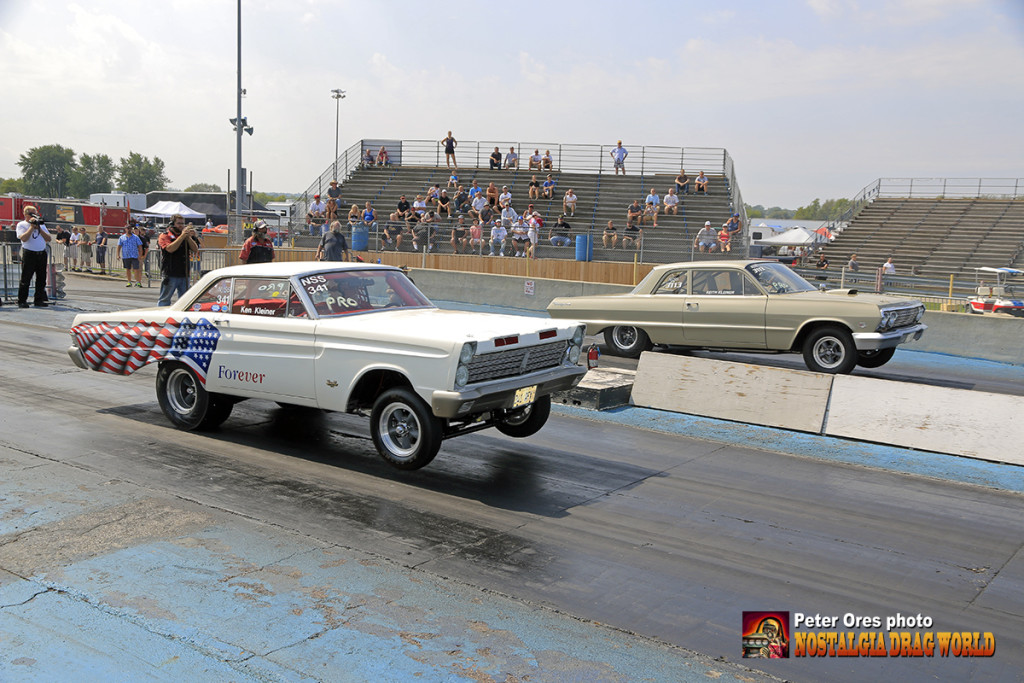 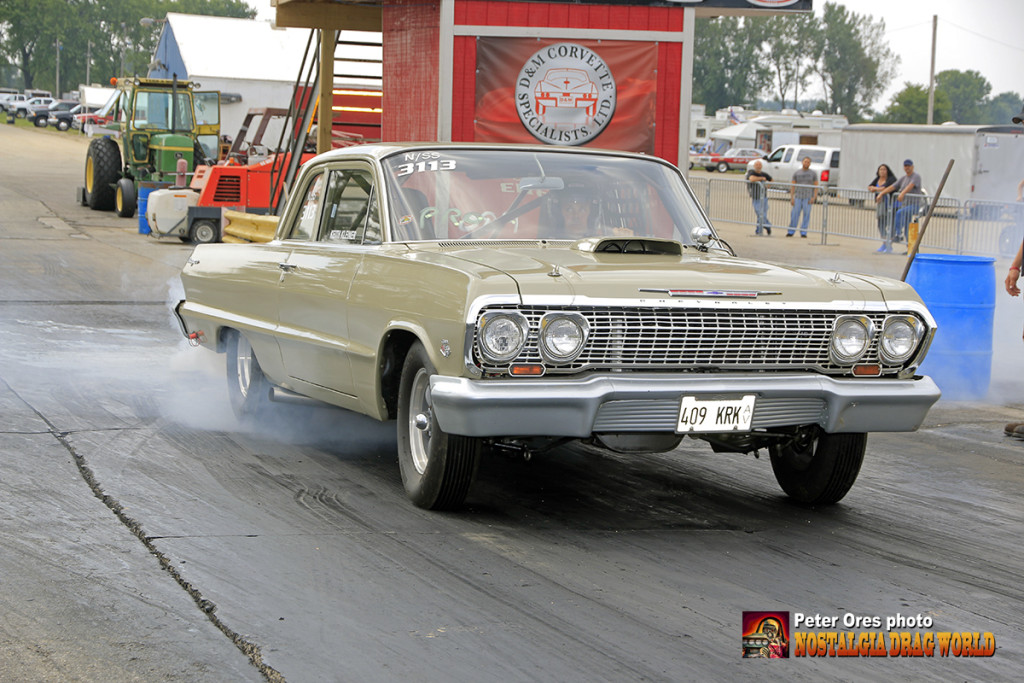 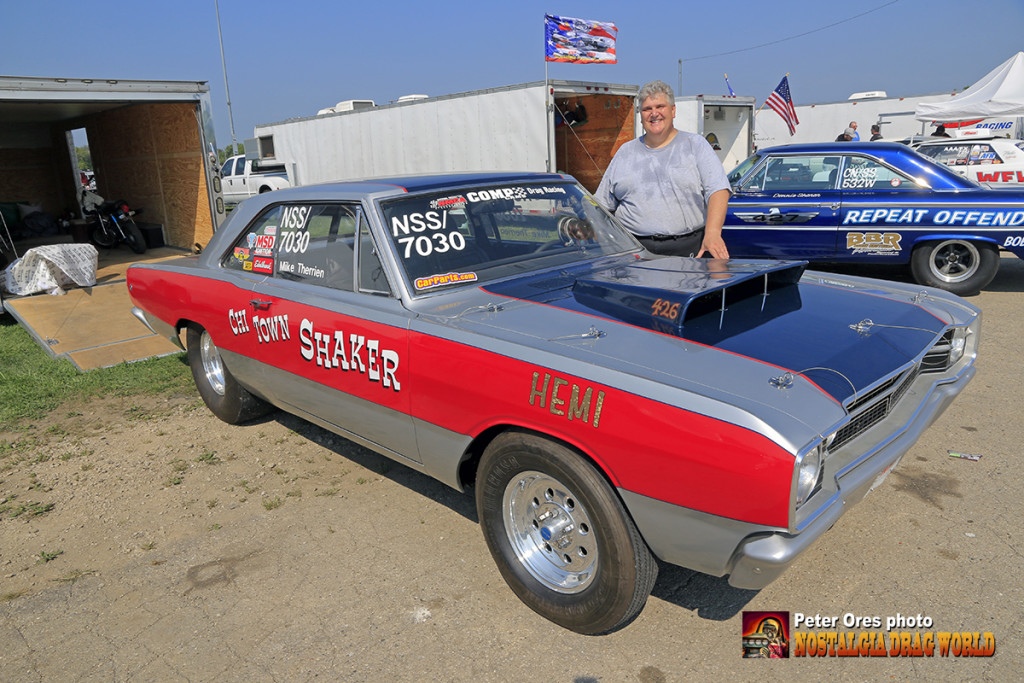 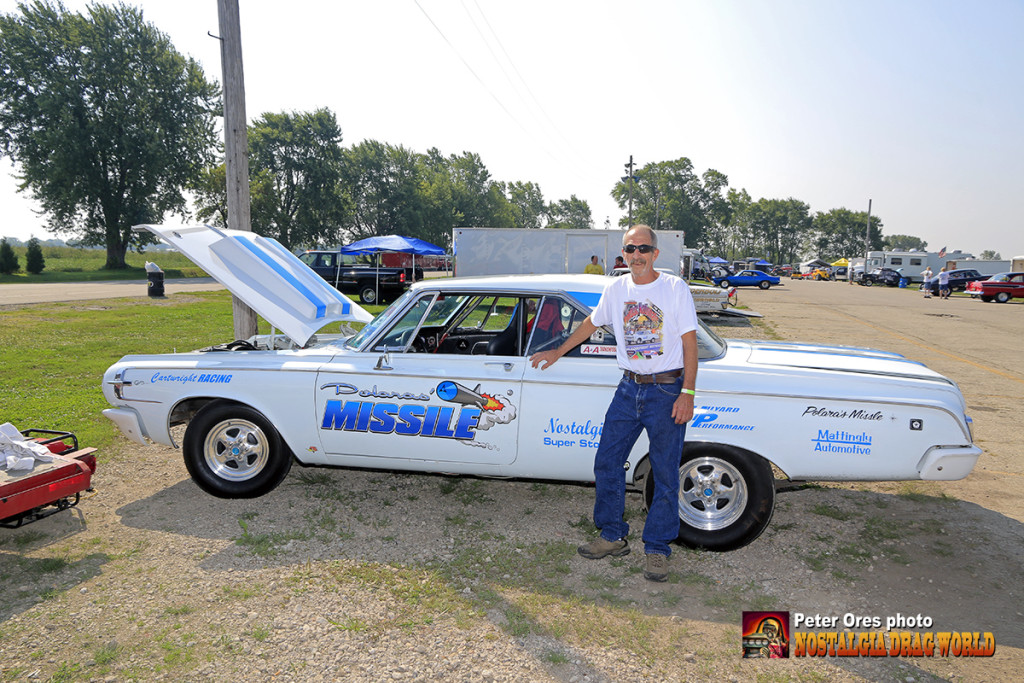 Tom Cartwright of Indianapolis, IN poses with the co-owned 1964 “Polara’s Missile”. His dad Stan is the other owner 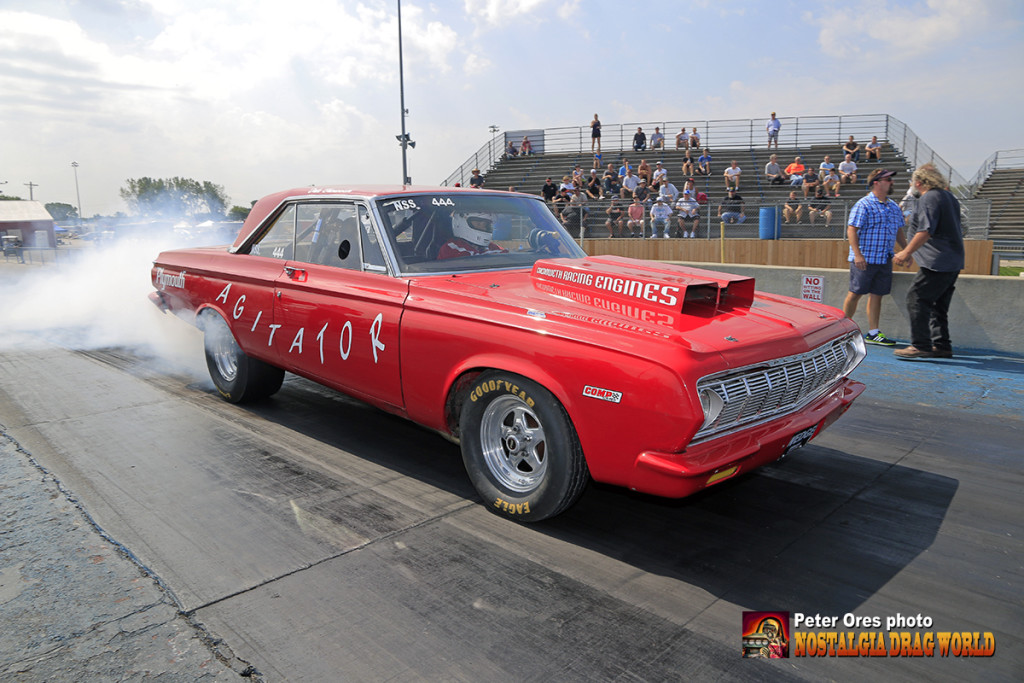 This 1964 Plymouth is owned and driven by Dale Chenoweth of Morton, IL 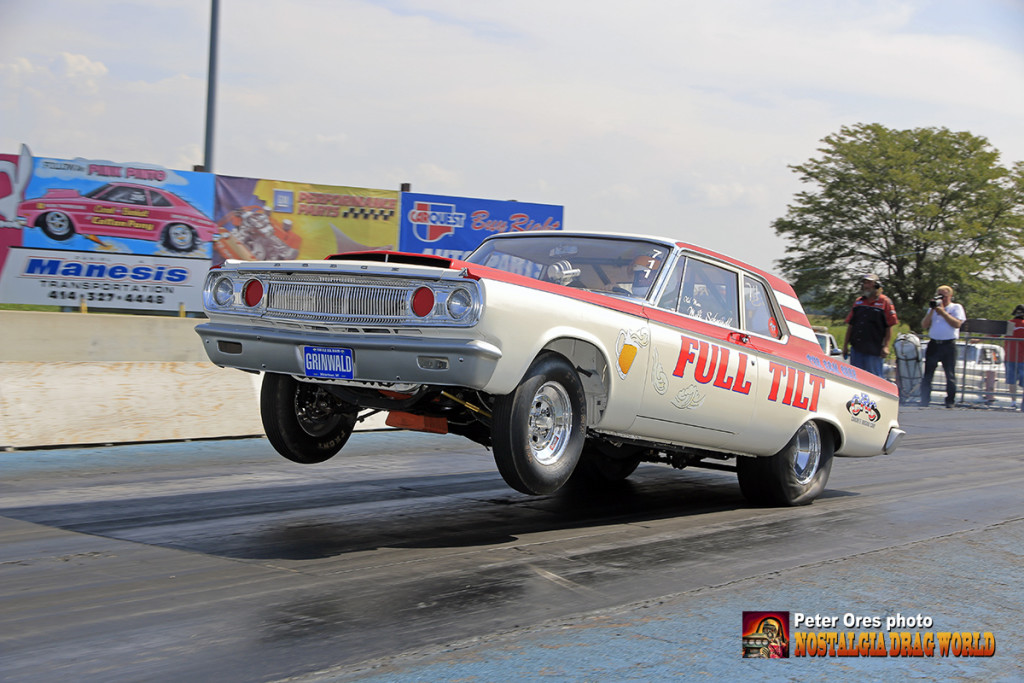 Here is Milt Schreindl from Waterford, WI in his 1965 Dodge “Full Tilt” 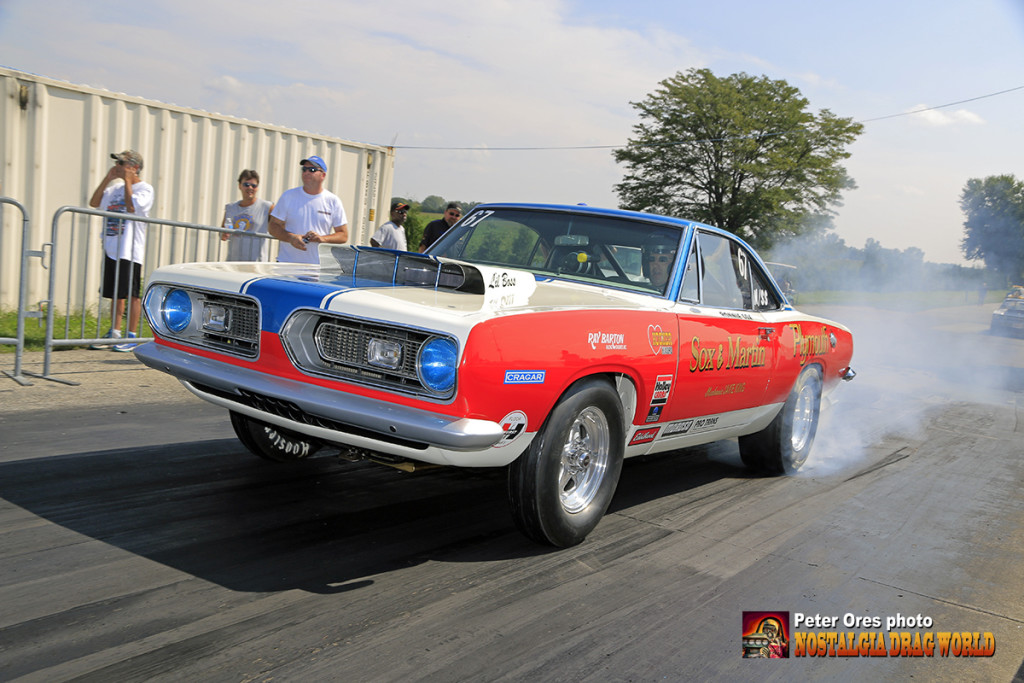 The Sox & Martin Barracuda of Craig and Richard Pfohl from Dubuque, Iowa. Craig is the driver. 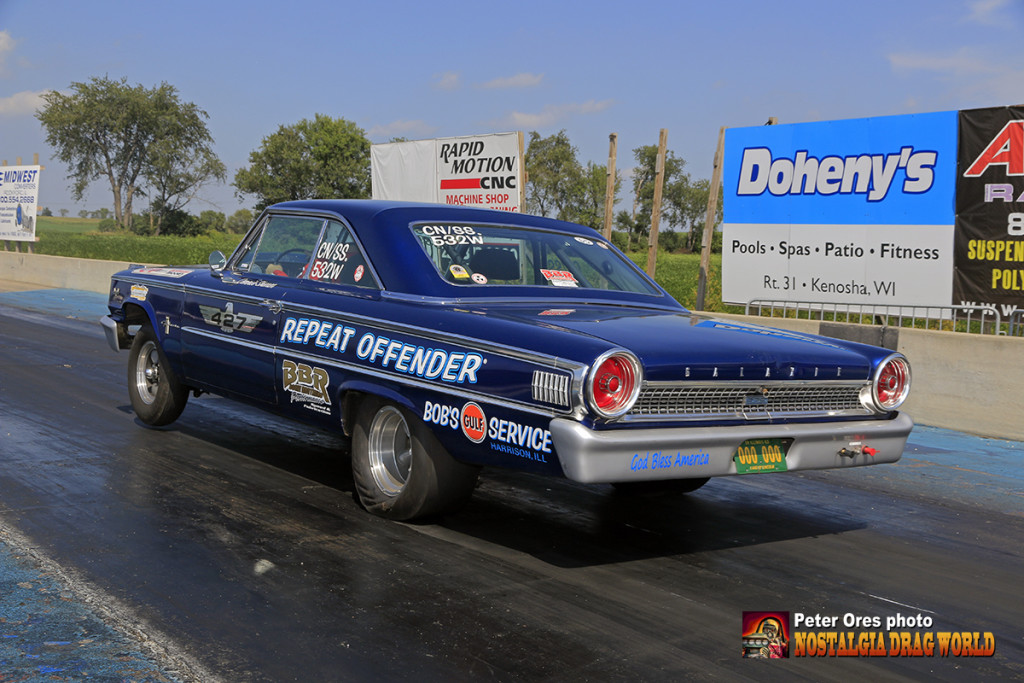 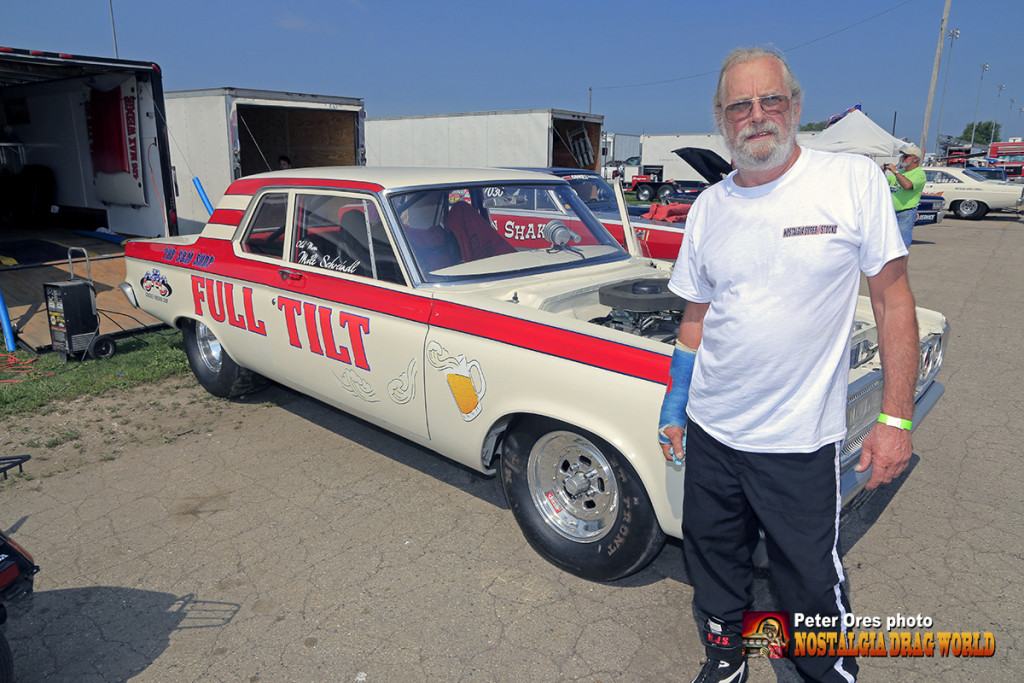 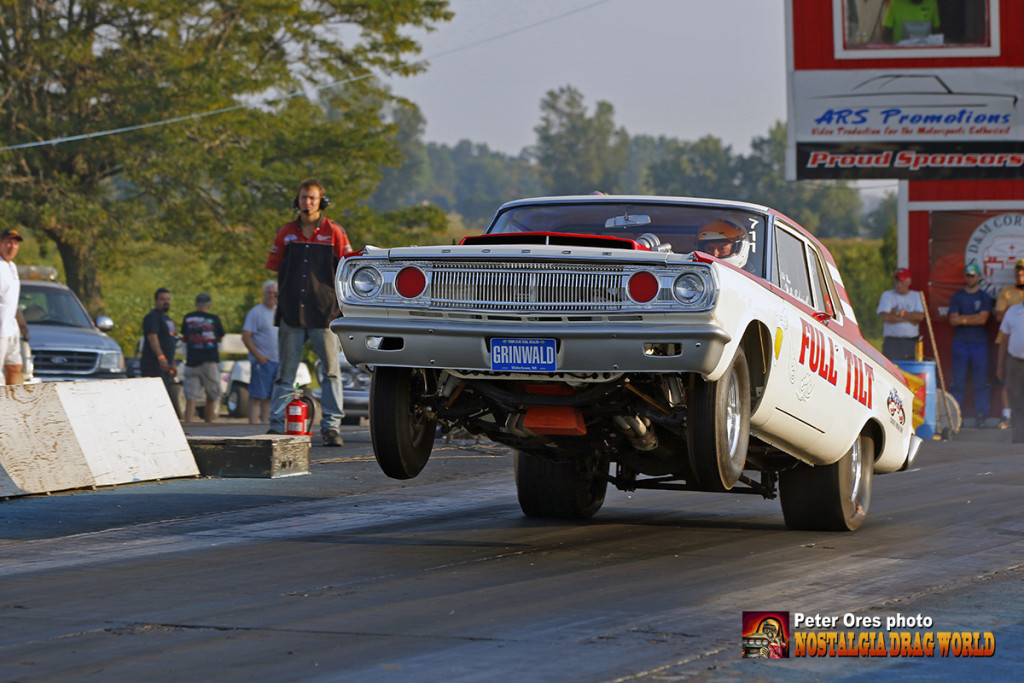 Here is Milt “Puttin a Tilt” on his Dodge

Adding some fun to the grind, Len Grimsley Sr. brought out his faded white 1964 Plymouth station wagon, which featured an engine built from spare shop parts, including a rare NASCAR single four barrel aluminum intake manifold and a water ski bolted to the chrome luggage carrier to simulate a surfboard.

“I only bought the car for the luggage rack,” said Grimsley, who enjoyed cruising the car around the pits. In a test-and-tune pass on Friday night, it ran a 12.50 and for a while on a warm summer evening it was like old times with Habura making carburetor jet and float changes and the crews just generally fooling around with the car.

On Saturday morning the NSS race manager paired it against Cartwright in the first two session with Jeff Burris driving. But the demands of a high temperature race track took a toll and like a veteran soldier, Grimsley retired it to the pits for a well-deserved rest. 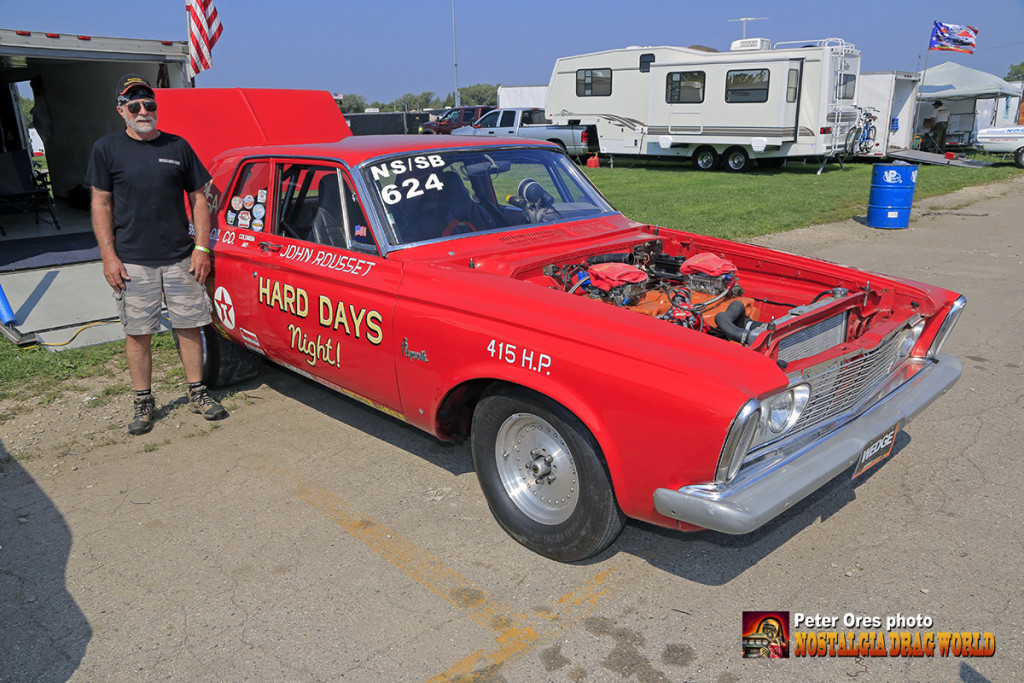 John Rousset of Columbia MO, takes time for a picture 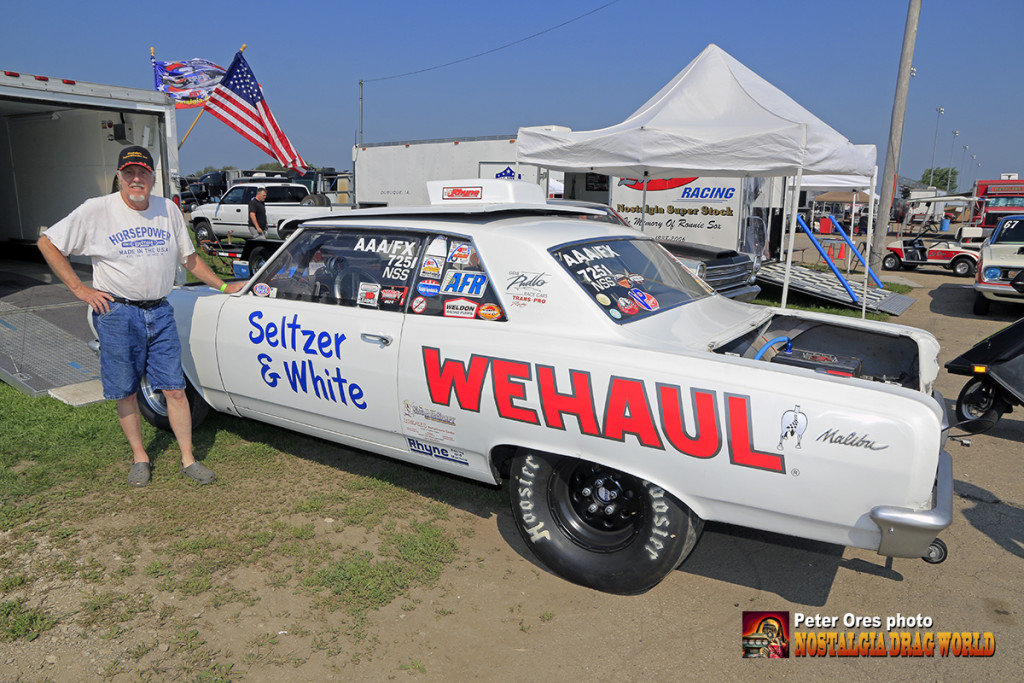 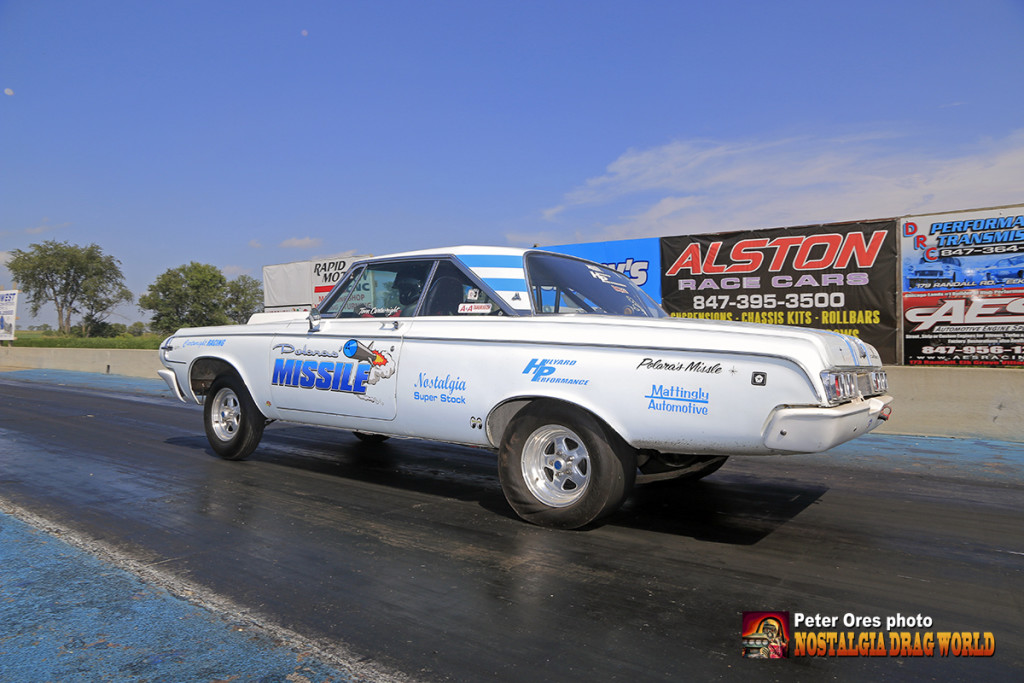 Tom Cartwright in his missile making a pass 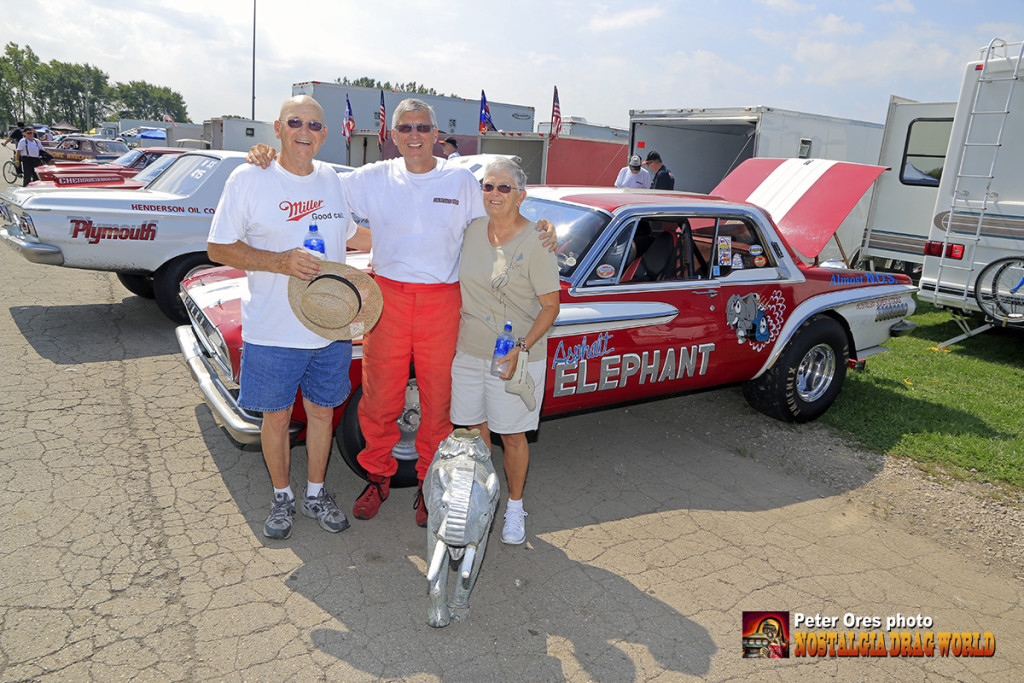 Tom and Les Ponder pose with current owner/driver John Grinwald.
The Ponder’s traveled from their home in Arizona to watch the “Elephant”. 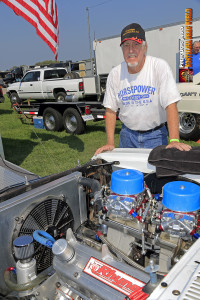 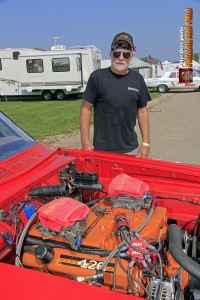 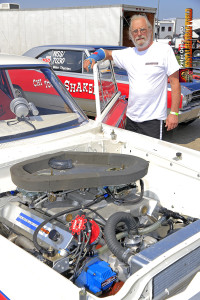