UNION GROVE, Wi. – If there is such a thing as a ‘quiet’ event in drag racing, Nostalgia Super Stock Inc. opened its 27th consecutive season in a calm and businesslike manner at the 2016 Memorial Day Classic at Great Lakes Dragaway.

The corporation ran eight sessions, four each on Saturday and Sunday, starting with 11 cars and ending with eight due to attrition.

Fitting smoothly into the overall program, which was run efficiently, ending at 9:00 p.m. on Saturday due to rain with a couple of features still in staging and by 10:00 p.m. on Sunday with the complete schedule done on time.

“We would have liked to have a few more cars but it’s early (in the season) and some guys are still putting stuff together,” said NSS Inc. president Rich Berlisk. “In general, it was a pretty good show.”

The ‘We Haul’ 1965 Chevelle of Bill White and Mike Seltzer was rolled into the trailer due to increased lash on one valve after clocking 8.89 at 150.82 in the second session. Later inspection revealed a broken lifter, which scattered debris throughout the motor, marking up a piston and also a cracked rear main bearing cap. 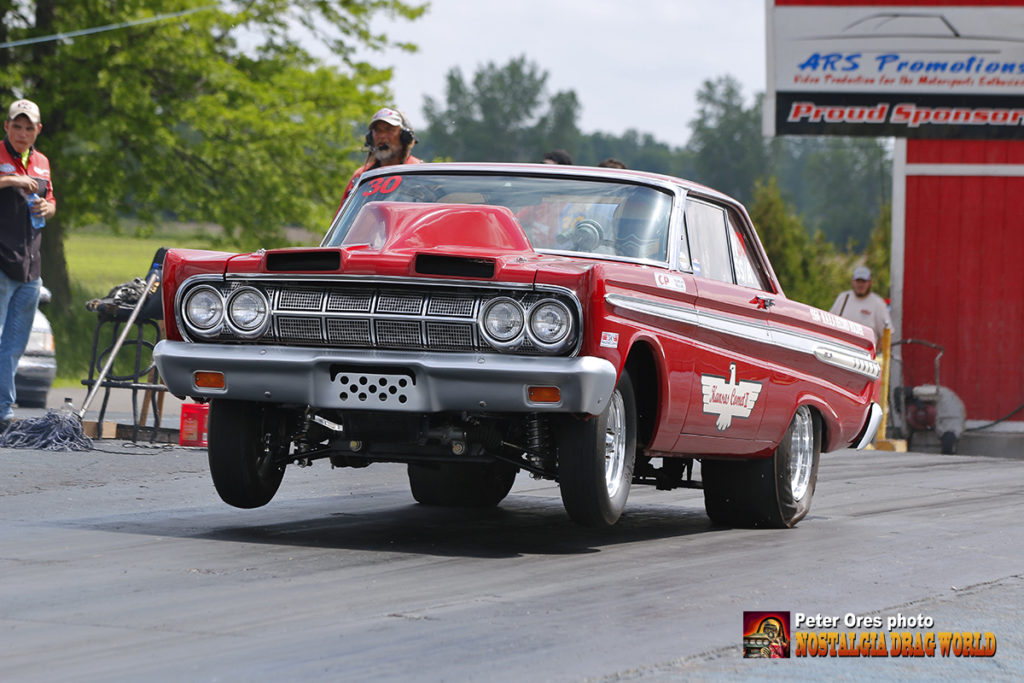 Wayne Keimig in his beautiful 1964 Mercury “Kansas Comet”. Wayne is well known in the automotive restoration field. He is from Atchison Kansas.

In session three, the 1964 Mercury ‘Kansas Comet’ of Wayne Keimig broke on the starting line. That failure was later found to be due to a broken ring gear.

Driver Mike Singleton and crew chief Bill Green each worked up a lather solving problems in the 3800-foot density altitude air with the Hemi-powered ‘Resurrected’ 1964 Dodge in its first ‘official’ outing after a rebuild.

Singleton stopped the clock at 8.959 at 150.42 in Sunday’s first session before deciding he needed to take the car back to the shop and install more hood retention clips.

On the success side of the ledger, John Rousset set an all-time personal best of 9.856 at 132.80 in the ‘Hard Days Night’ 1963 wedge-powered Plymouth, which features an factory original crossram intake manifold. 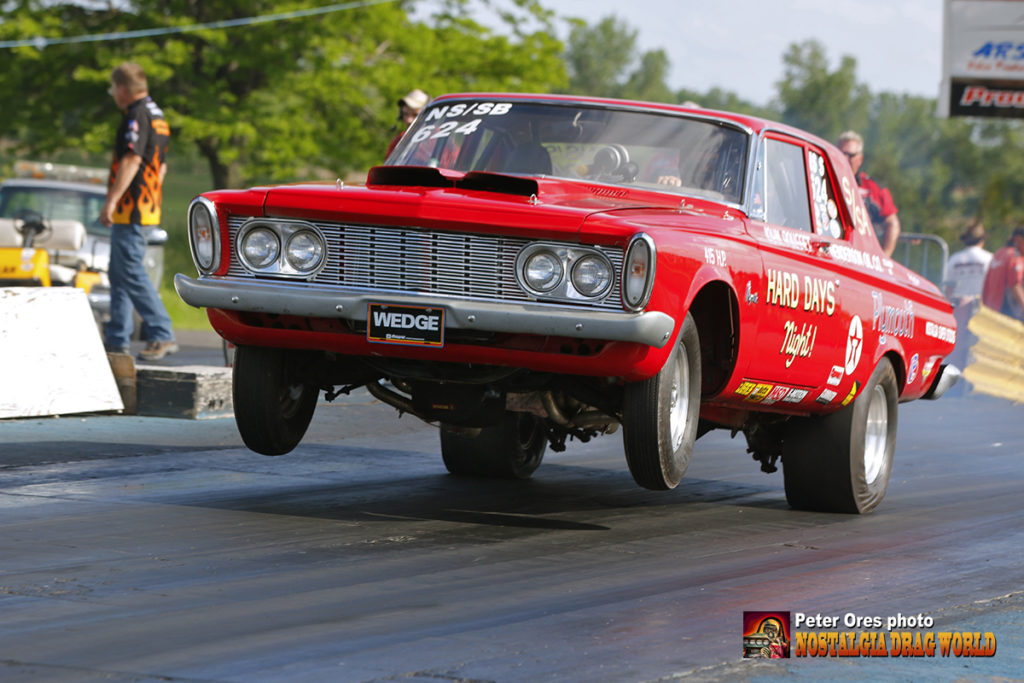 The “Hard Days Night” 1963 Plymouth Max Wedge, built, owned and driven by John Rousset of Columbia, MO.
This car has been with the group since 1993 which was founded in 1989.

Coming from his home base in Columbia, Missouri, Rousset had set the intake on top of a newly rebuilt motor less than a day before arriving, following a non-stop thrash that started when he discovered a cracked main bearing web in the old block.

“It was a lot of work but it was worth it,” said Rousset, a Marine Corps veteran and racer of more than 50 years. 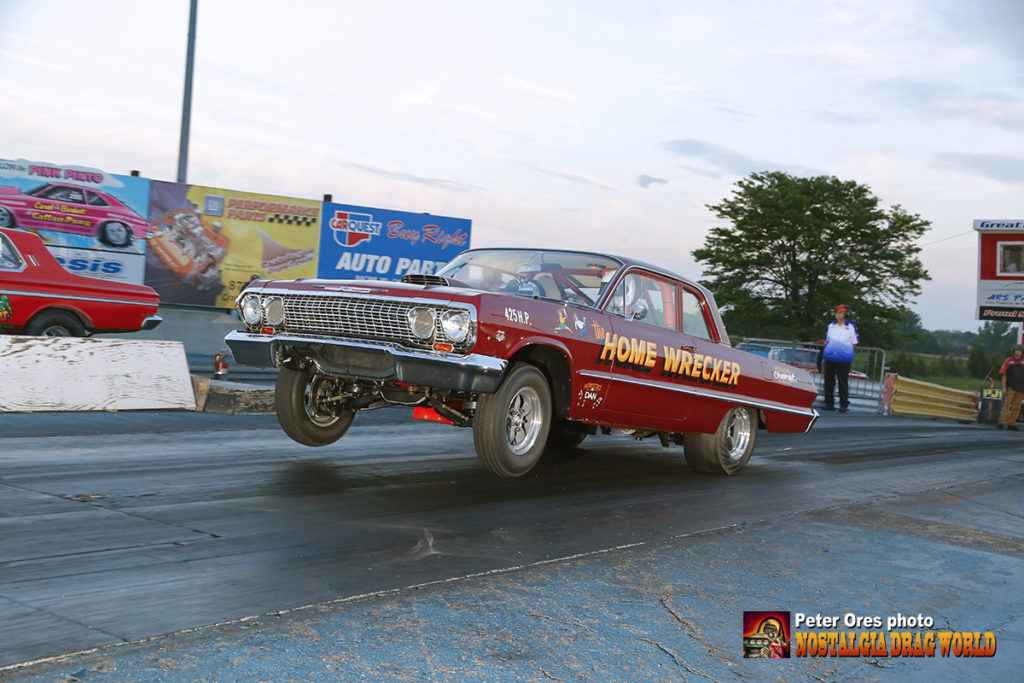 The “Home Wrecker” 1963 Chevrolet 409 piloted by Dan Hradisky, Chicago, IL.
This car has been in the family for decades originally owned by his crew chief and dad, Bob Hradisky.

Bob Durling of Mooresville, IN and his 1963 Plymouth Fury Max Wedge launching against the Home Wrecker 1963 Chevy. 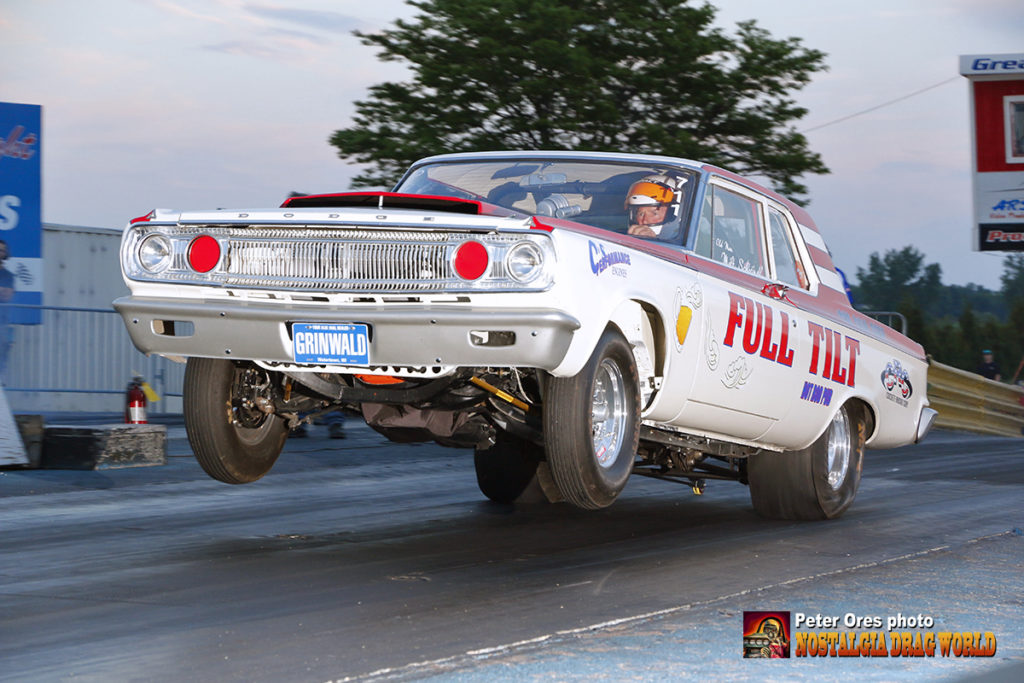 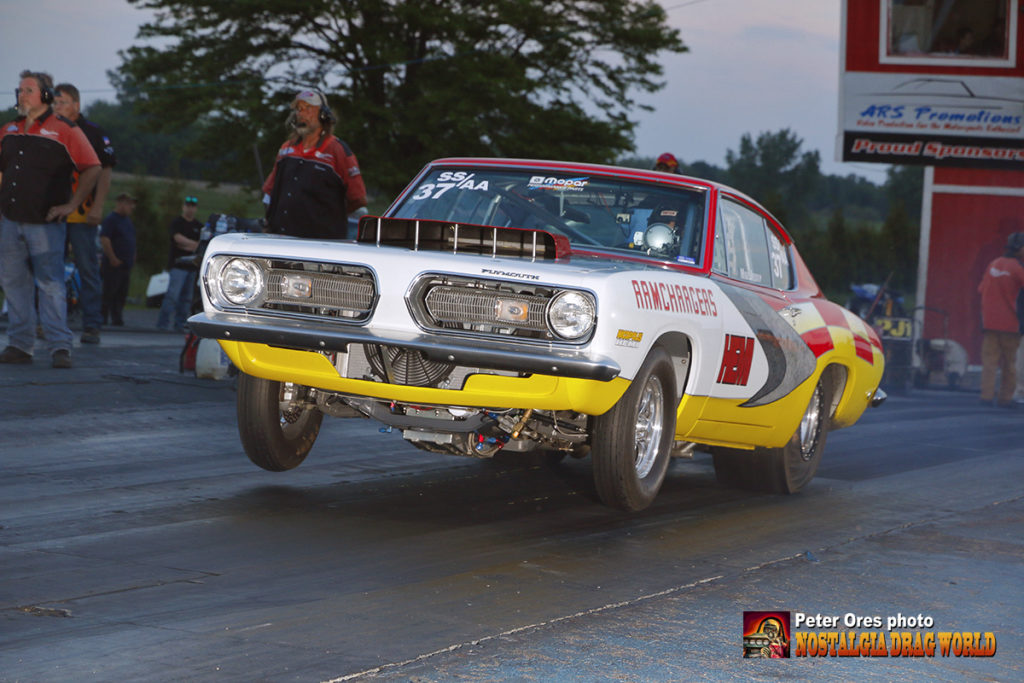 Here’s Mike Jessup in the beautiful 1968 Plymouth Barracuda “Hemi” and getting the Hemi “rollin” down the track.
Mike resides with his family in Homer Glen, IL. 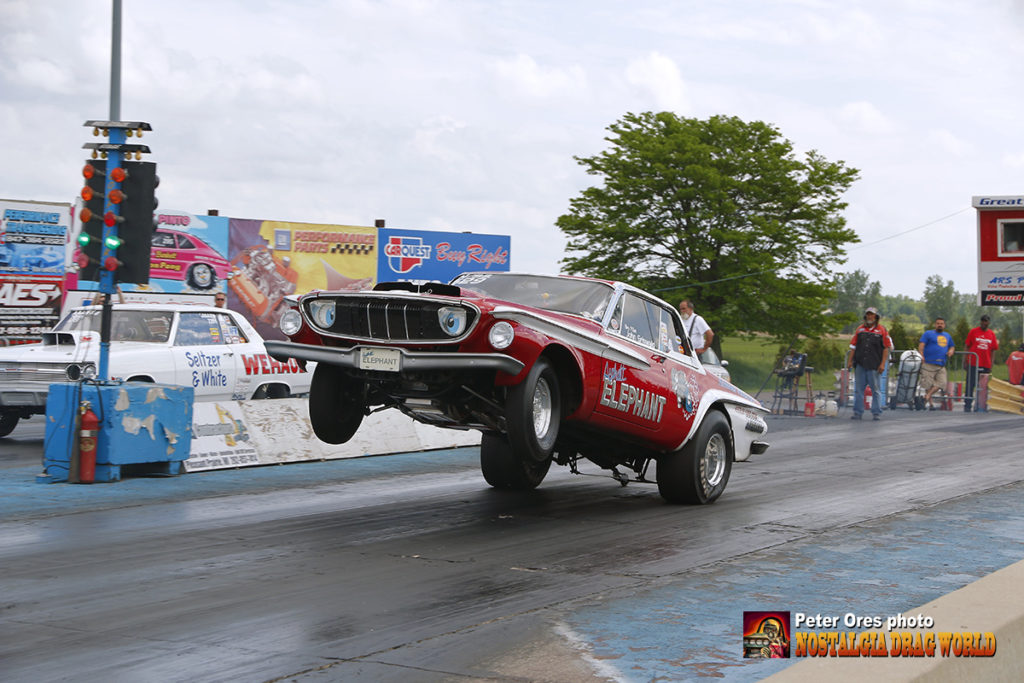 The ‘Asphalt Elephant’ driven by John Grinwald slugged it out both days with Schreindl’s Polara and edged an 8.784 at 153.45 for best elapsed time.