HAVANA, Ill. June 4th – At 6:30 p.m., Doug Henderson was hunched underneath his ‘Never Too Late’ 1964 Plymouth, sifting sand through his fingers. He was looking for a carburetor accelerator pump C-clip, a loss that could have been most difficult to overcome.

After removing the factory original Carter AFB tops, a gust of wind had flipped the fender cover and all the parts laying on it flew into the air to land who knew where.

Three hours later, however, he was standing beside his car in the track’s winners circle, getting his picture taken. “This is definitely a better situation,” said Henderson, who edged Bob Durling 6.6191 at 105.13 to 6.6423 at 102.93 in the Chicago-style shootout final at the Central Illinois Raceway Spring Nostalgia Meet June 11 for Nostalgia Super Stock Inc. 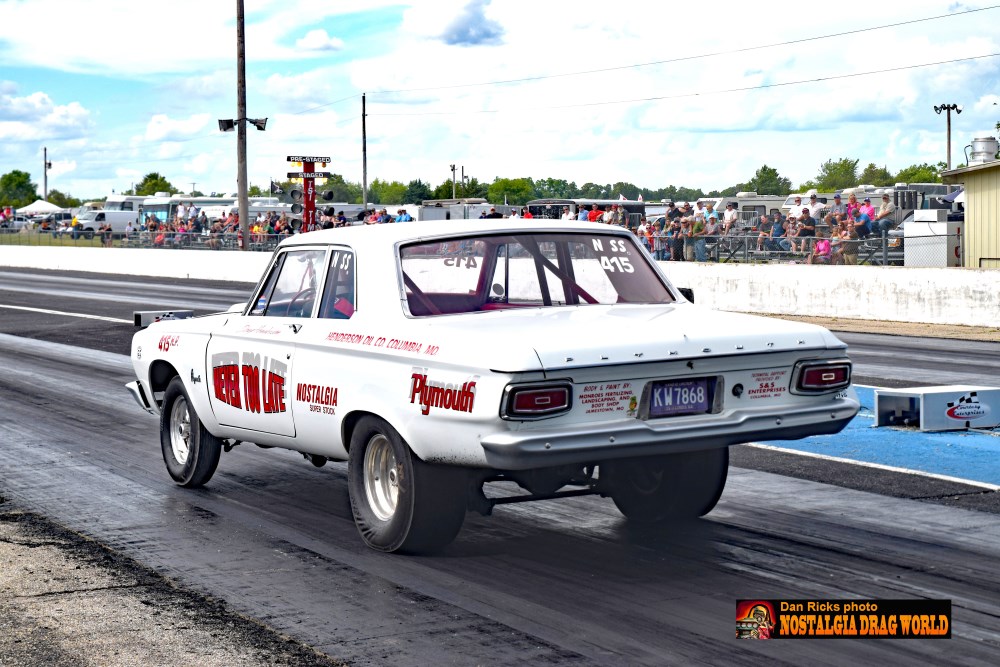 Doug Henderson longtime racer and member of NSS Inc seen here getting into the staging lights.

The final capped a day of near perfect racing which began at noon. The eventual 13-car field ran six sessions plus the shootout for a total of 80 passes without any incident or breakage.

The exception was Dennis Sherer’s 1963 Ford Galaxie ‘Repeat Offender’, which broke a transmission during a time trial before the first session. This was Sherer’s first outing since breaking a motor last season.

“This was an outstanding performance by our entire organization,” said NSS Inc. president Rich Berlisk, who posted two passes at 6.14 and another at 6.16 in the 1963 “Asphalt Angel’ Plymouth. “Hopefully we can do it again at the autumn event.” 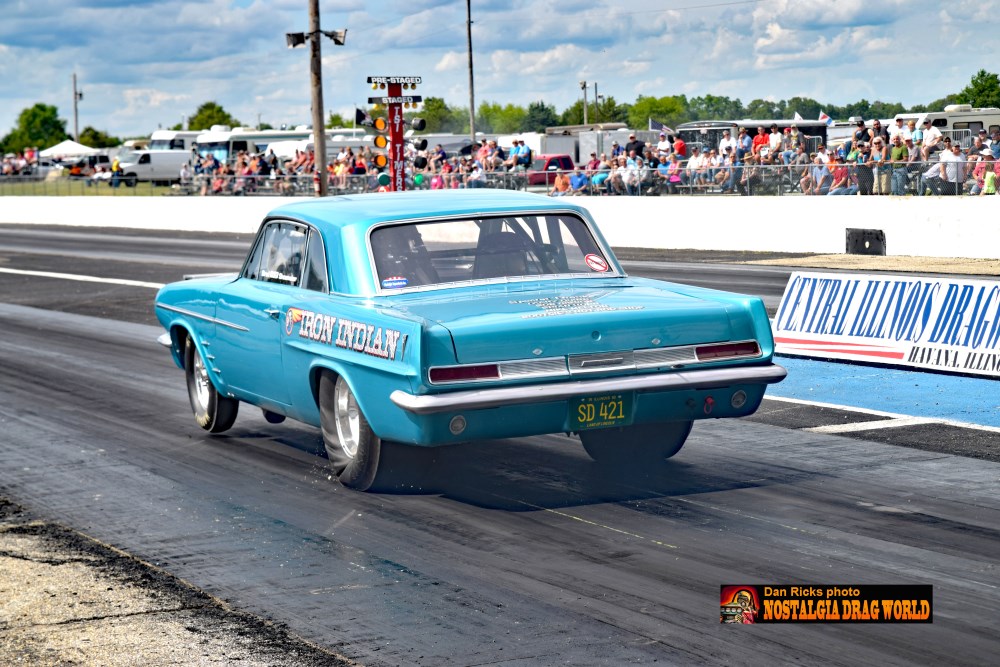 Check this out, Brad Shoemaker (aka Stretch) has three yellow bulbs and about to go green in his beautiful
1963 Pontiac Lemans “Iron Indian”. Brad, wife Molly and family live in Sherman, IL. Great action photo from Dan Ricks.

Brad Shoemaker made his first on-track appearance in more than a year with his ‘Iron Indian’ 1963 Pontiac LeMans, clocking a 5.713 at 121.16 event-best.

As the day moved along, the scorekeeping for the shootout became interesting with side-by-side runs as close as 0.0192 and 0.0172 between Ernie Keppler’s ‘White Warrior” 1963 Pontiac Tempest and Spencer Schreindl’s 1964 ‘Max Wedgie’ Dodge Polara; 0.0139 between Wayne Keimig in the ‘Kansas Comet’ 1964 Mercury and Milt Schreindl’s ‘Full Tilt’ 1965 Dodge and 0.0089 between Henderson and Ryan Eads ‘Nightmare’ 1964 Plymouth Belvedere. 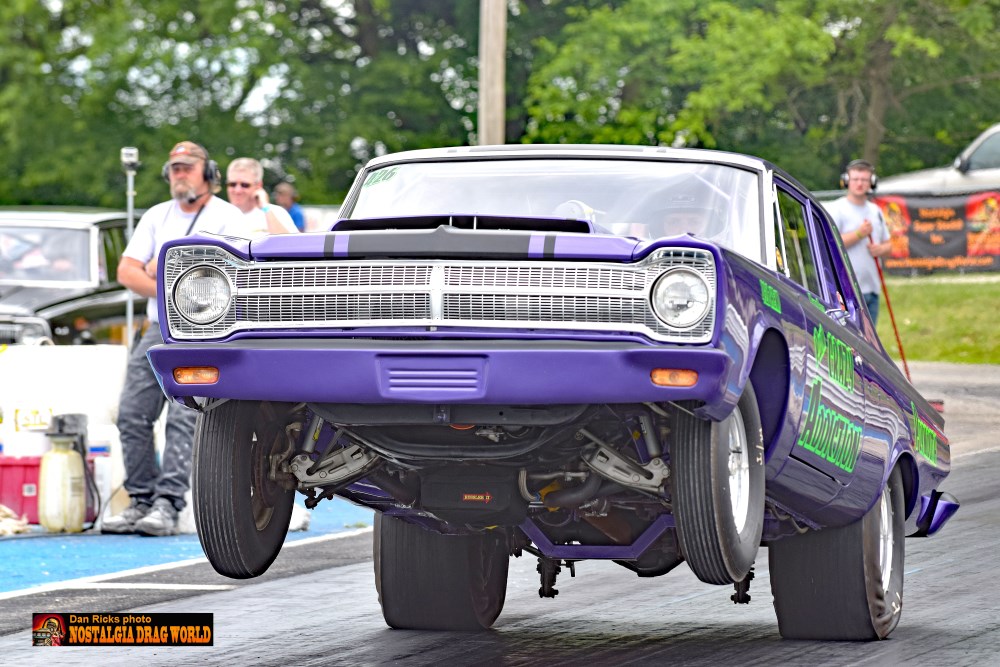 Marty Bittle along with his wife Melissa, (crew chief) call home Belleville, IL. Here he is showing off his newly installed engine diaper on the 1965 Plymouth “ Crazy Addiction”. 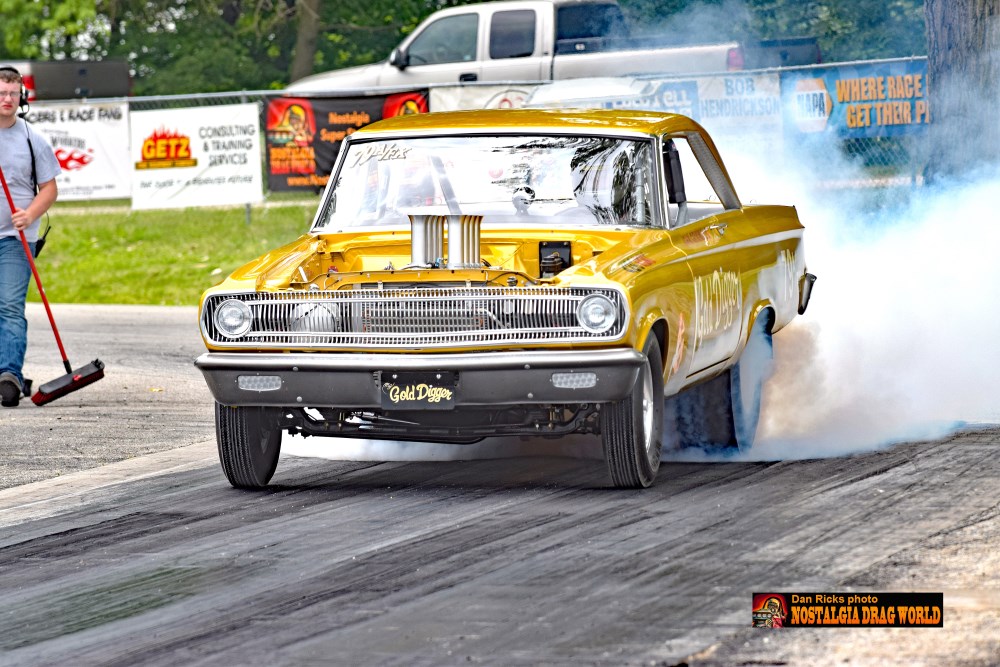 While Henderson’s driving vision proved to be good enough, he definitely received some help from Bittle. That lost C-clip was problematic because it is unique to the Carters and the common replacement Edelbrock models use a different and unadaptable design accelerator pump and no one present had a spare Carter.

So after about 20 minutes of unsuccessful searching, Henderson started fabricating an alternative design. Meanwhile, Bittle walked up, carefully scanned the engine compartment and saw the missing clip, laying on the lower radiator support.

“There’s nothing like having those young eyes,” said Henderson. 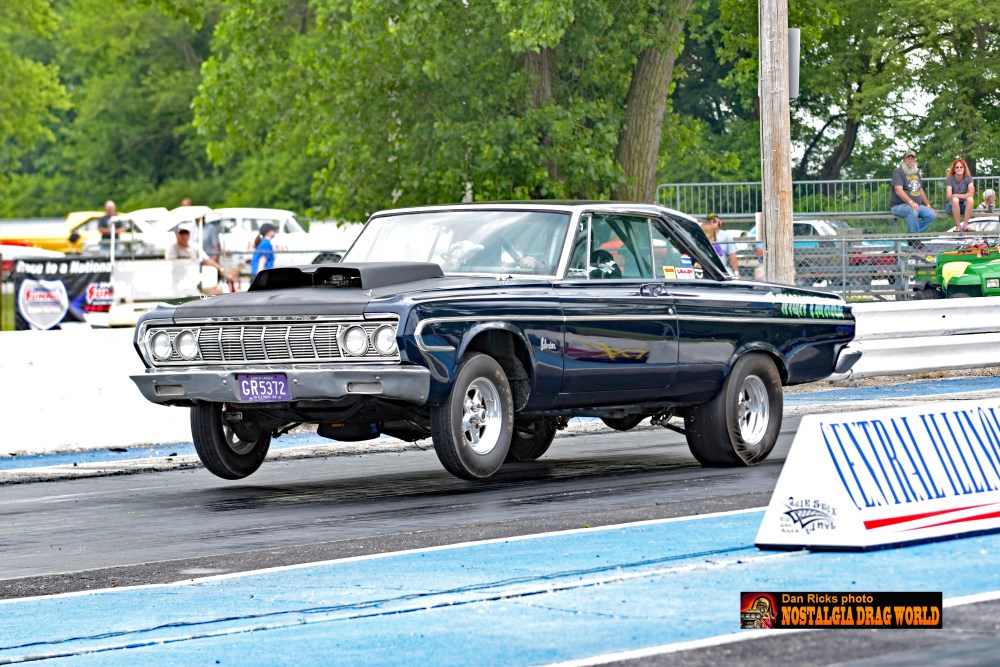 Here is Ryan Eads putting the pedal to the metal in his 1964 Plymouth powered by a Dale Chenoweth max wedge.
Ryan, wife Amber and children reside in Emden, IL. 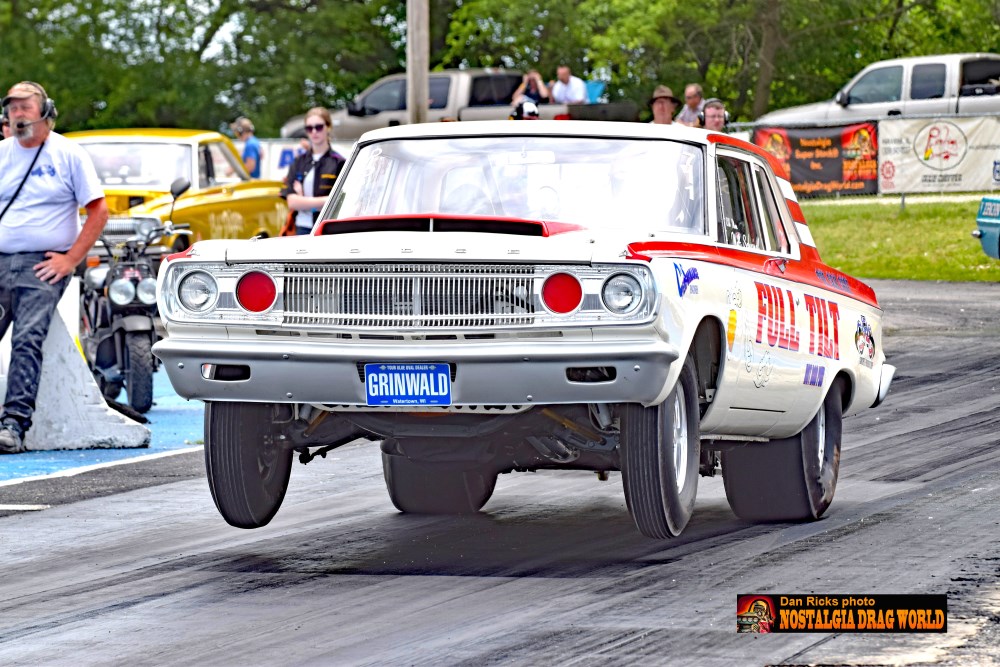 Long time racer now running a NSS car Milt Schreindl in his 1965 Dodge “Full Tilt”. Milt is the father of Spence who drives a
1964 Dodge and other son Craig who is nearing completion of his 1965 Comet AFX to also run with the group. 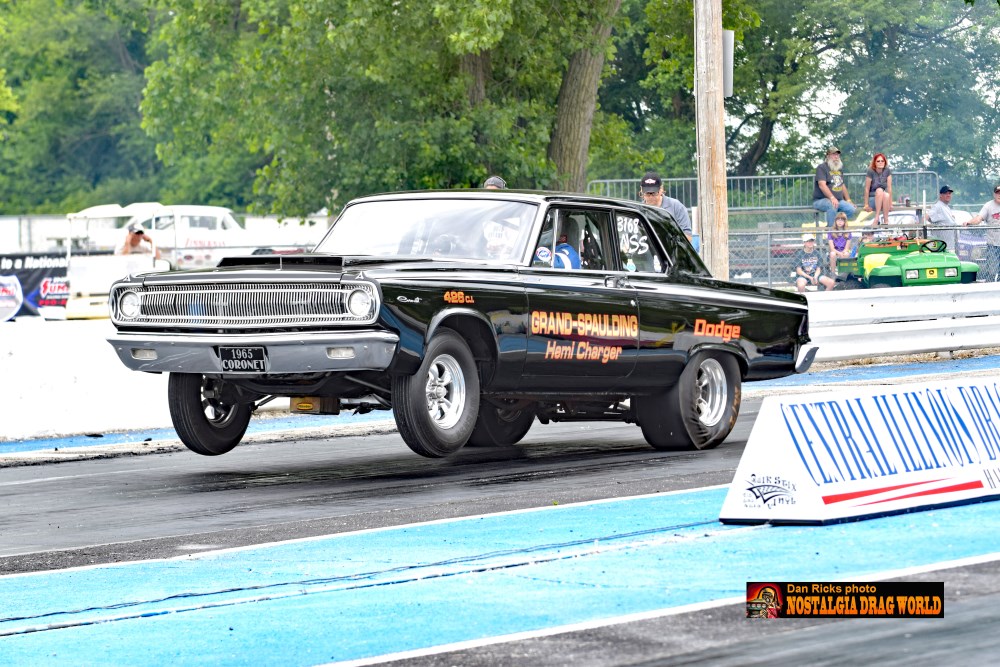 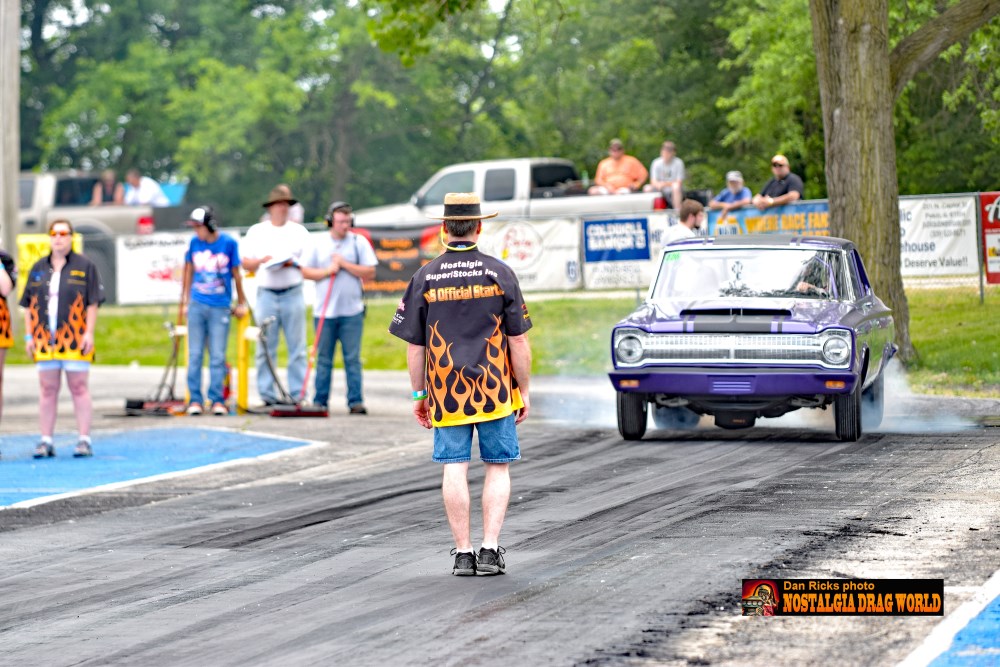 Marty Bittle warming up the rubber under the watchful eye of the “Chief Starter”, Larry Brennan of Jacksonville, IL.