The afternoon weather was sunny and hot with ambient air temperatures into the 90‘s and track temperatures in excess of 130F. However, most everyone was pleased that the atmosphere was dry.

The company decided to lay low in the pits, stay in whatever shade could be found, and not come out individually during the open test and tune period between 2:00 and 5:00 p.m.

However, apparently practice wasn’t needed as the 12-car field eventually featured five races decided by 0.004 seconds or less and 10 individual racers among 10 match races eligible by 0.0452 seconds or less for the Chicago-style two-car final runoff.

The final featured Milt Schreindl in the ‘Full Tilt’ 1965 Dodge against Kevin Wilson in the ‘Wilson & Son’ 1963 Chevrolet. 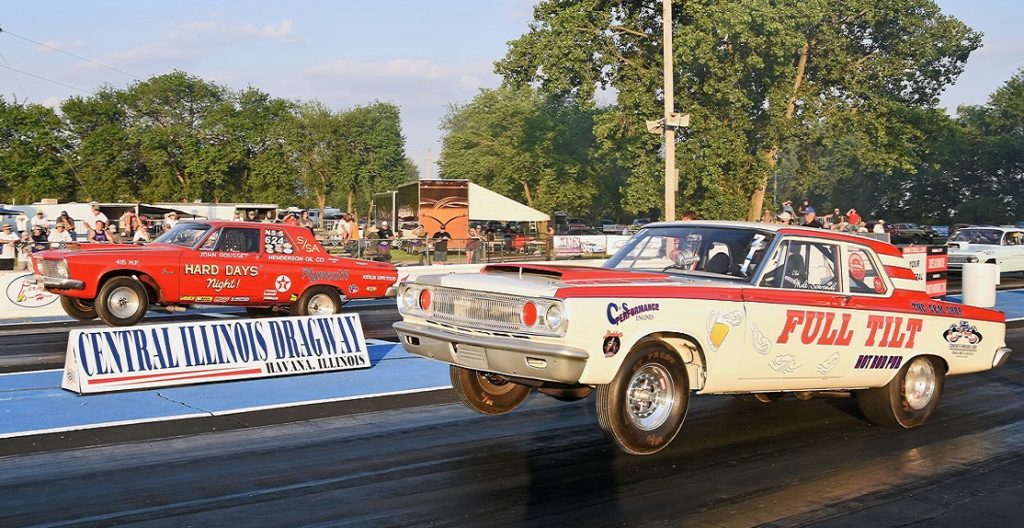 “She spun in every gear,” said Schreindl, who continued his remarkable stretch of consecutive events and sessions, more than 100, into three years.

For Wilson, the win was welcome after overcoming some medical issues and breakage problems with the car over the past two seasons.

“I am very pleased to be out here again and performing well,” said Wilson, who runs a W-design motor in his show quality car.

Wayne Keimig was the most consistent performer, clocking runs of 6.4122, 6.3672 and 6.3850 in the ‘Kansas Comet’ 1964 Mercury with Ford 427 FE power in his first event of the season. Late last year he was hampered by ignition breakup at high engine speeds, which was solved with distributor modifications. 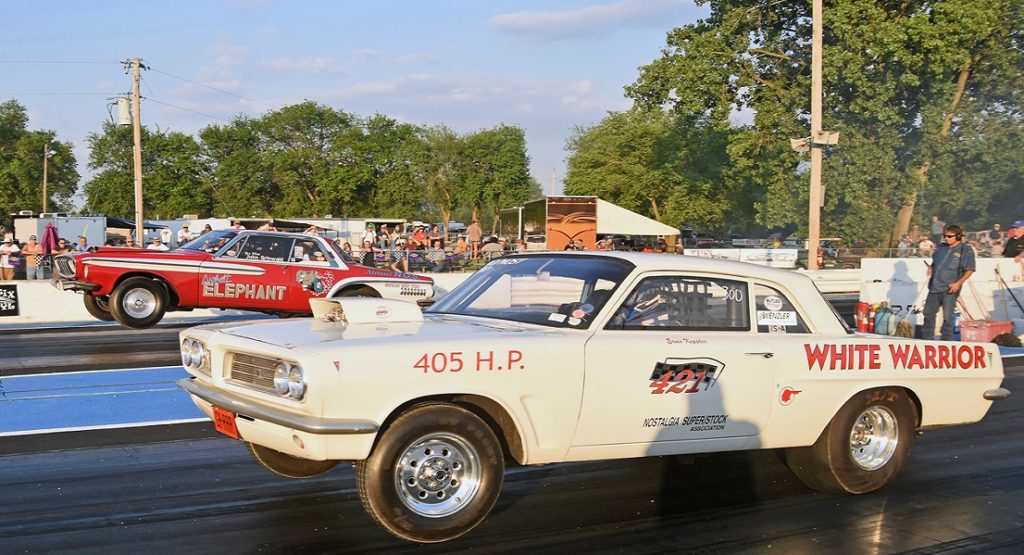 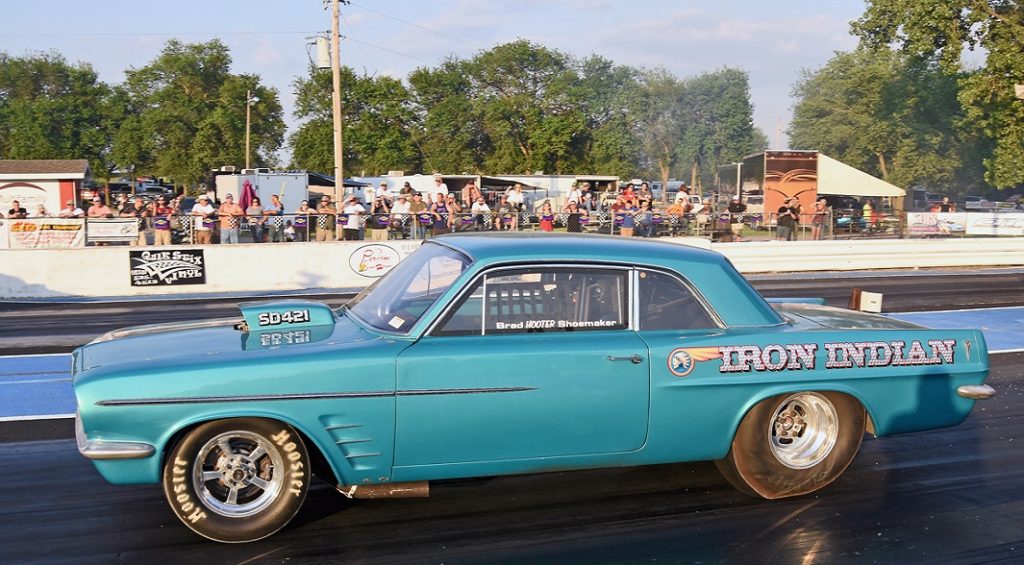 How close was the racing? Of the 10 pairings which competed for the final, the total margin was 0.1526 seconds, making the average difference 0.01526 seconds, including four margins under 0.0090 seconds.

Meanwhile, the final minute of today’s basketball or hockey games are clocked in 0.1 second intervals.

As the hot afternoon cooled into a pleasant evening, track manager Jeff Laeseke was smiling while watching the cross-track hillside fill up with spectators sitting in lawn chairs and tailgate down pick up truck boxes.

In addition to the nostalgia show, Laeseke was also hosting a full bracket racing program. “This is good,” he said. “We’ve been needing these conditions and finally got them.” 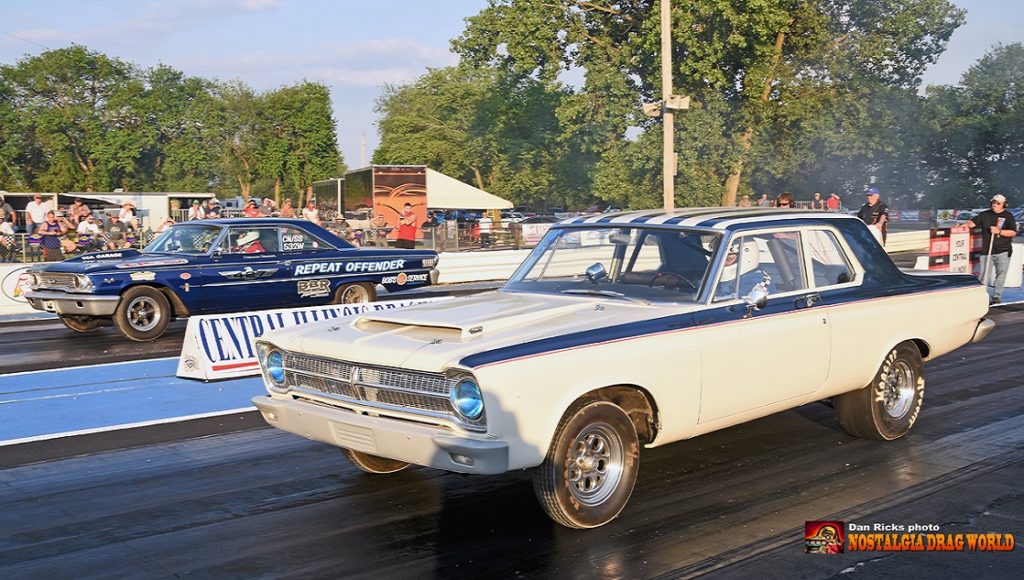 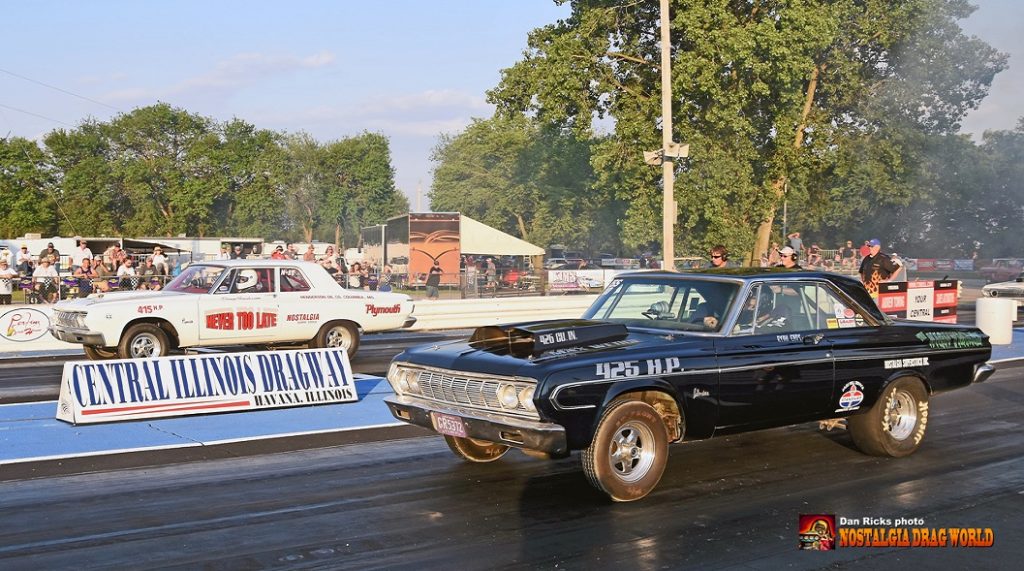