It has been a great last two weekends of racing with NSS Inc, with our first two hall of fame members each attending an event. Dave and Emma Campbell at Osborn, MO and Tom and Les Ponder at the Great Lakes Dragaway event. It was great to see both couples attend with their old group.

OK now for the Grove follow up.  First the weather temps were excellent for Sat and Sun both in the low 70’s. Mother nature  played a little havoc with us on Sat evening with rain starting after 9pm and on and off rain all night until about 8:30 am. The track personnel worked all morning drying and vacuuming water for several hours.

On the racing end, we did three runs for the program on Saturday plus some took several time runs early afternoon. On Sunday the program started later because of the rain from the morning. Sunday we got two runs during the program. We started Saturday with 17 cars with 15  finishing up the night. By Sunday evening the last pass  still netted 12 cars for the evening parade lap and our final pass of the event. There were some good pairings throughout the weekend and some personal bests and season bests were accomplished. Spence Schreindl ran his personal best in the low 8.50’s and Howard Crull broke the 10 second mark with a 9.93. 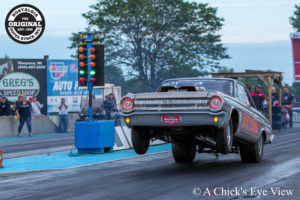 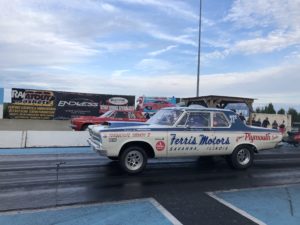 The group had the annual company brat & burger cookout with a ton of great food from many contributors. A special thanks goes out to our chefs  tending the grills to include Tom Ponder, Doug Geuder, Mark Mullarky and Scott Wallace. Tom even cooked the second day. Another special thanks to all that brought dishes and bowls of great sides for all to share.

I was told the troops were up partying with the fire burning until somewhere around 4 am which made for some tired people on Sunday. I know they enjoyed themselves.

I want to thank Renee Schreindl, Brian Derge and Mark Mullarky for working “the line.” Also for Bob Wilkiewicz for doing the race pairings and coordination with the track.

In closing another great weekend in the books !