John Grinwald used to have thousands of Dodges. Some were fast, some were pretty and some were both. Now he has a just a handful. However, a consolation of this condition is that all of them are fast and pretty and one of them might be one of the most recognizable in the entire country.

For the past 25 years, the ‘Asphalt Elephant’ 1962 Dodge Dart has been one of the most unique and well-known cars to regularly appear in Nostalgia Super Stock racing. First catching attention on the East Coast, one of the car’s earlier owners was a known friend of legendary racer Bill ‘Grumpy’ Jenkins. The scuttlebutt is that if Jenkins didn’t actually own it at some point, he likely worked on it. Meanwhile, Grinwald, a native of Watertown, Wisconsin, was busy living a charmed automotive life. His father owned a service station and then a series of auto dealerships, including Studebaker, Dodge and Ford. The younger Grinwald started working at the Dodge store in 1968 as a teenager and went on to eventually manage the business from 1980 until it was sold in 1998 after Chrysler’s ‘merger’ with Daimler. Smart move. “We figured the Ford franchise would be our best vehicle into the future,” said Grinwald. However, during his early years at the Dodge dealership, Grinwald literally lived automotive history. “I prepped many cars in the 60’s and 70’s,” he said. “The salesmen were too lazy to move cars around the lot and I was more than happy to do that. I drove them all, including the Super Bees, the Darts, Challengers. I would do a lot of tuning, working on distributors and carburetors.” And the driving continued after sundown. “There was a little street racing going on and I could take any car off the lot any night,” he said. “If it got beat, I would go and get another. Or if it won, I would sometimes sell it to the opponent. I was reading all the magazines. My eyes were big. I was smelling Sunoco 260 and laying rubber.” The years rolled on and the racing scene slowed down. Grinwald gravitated toward restoration and show cars. Meeting his partner, Rich Berlisk in 1988, the two combined to research, build and exhibit several top prize winning cars. But tiring of the show circuit politics, sitting in lawn chairs and listening to technical arguments about proper colors for sheet metal parts and such, Berlisk and Grinwald decided to start racing again. In the early 1990’s, they bought a white 1963 Plymouth from Fred Engelhart and went back to the track, bracket racing with Grinwald driving and Berlisk turning wrenches. Then two key things happened. They went to the 2000 Monster Mopar Weekend, running in the Pro class and noticed that a category called Nostalgia Super Stock would make several sessions while they waited in the staging lanes for one. The partners talked to a few of the NSS racers, including now fellow club member John Rousset, Clay and Rosie Kossuth, Bill and Mitzi Herzing and learned something. “We started to realize these people were different,” said Grinwald. “They were racing and enjoying it. There was a relaxed, friendly vibe to it, not like the sometimes cut throat stuff that goes on in the brackets.” Grinwald recalled watching club members Larry Quinn’s ‘Blast From The Past’ Pontiac and Tom Ponder’s ‘Asphalt Elephant’ run down the track, pulling wheelstands and running in the 9’s. He liked the show. 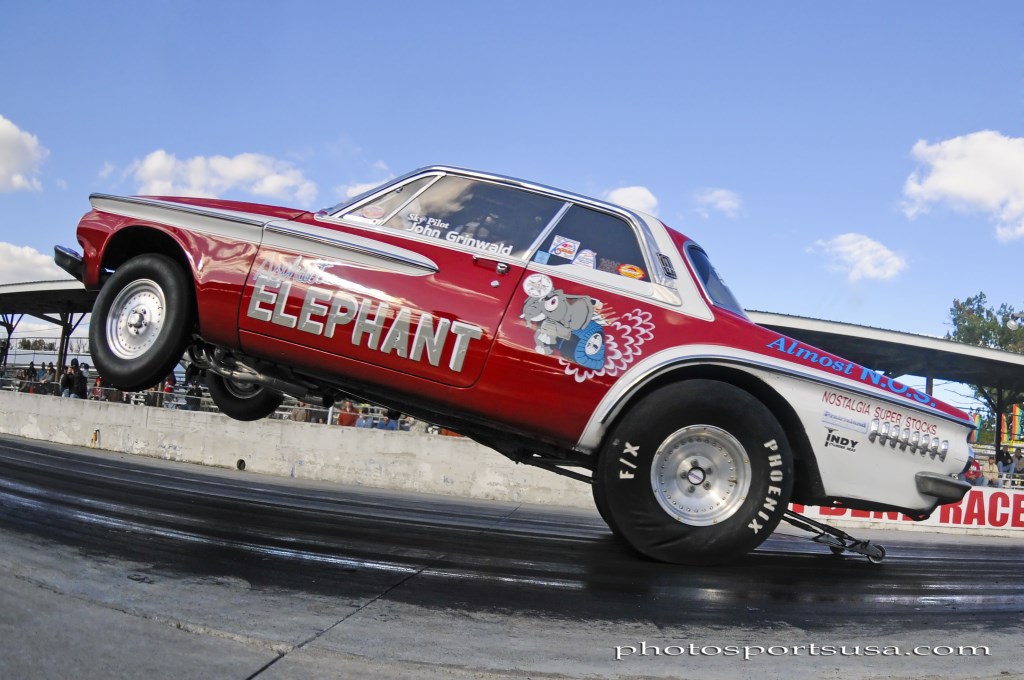 Then Berlisk decided he wanted to drive again, eventually modifying the car into the low 10-second ‘Asphalt Angel’.  Another car was needed. By that time, the ’62 Dodge had been acquired by Denny Guest, owner of South Oak Dodge, gathered a reputation as an unbeatable Chicago street fighter and then moved into Ponder’s possession. The Ponders, Tom and his wife Leslie, raced in the club approximately a decade. Former owners of a residential construction company in the suburbs of Chicago, they were retired from work but by that time, Tom Ponder was (sorry guys, I can’t pass it up) pondering retirement from racing. In 2002, they sold the car to Grinwald. “It was a great package, coming with a very good car, a trailer and a lot spare parts,” said Grinwald. “I think Tom felt I would take good care of the car. I didn’t change the name or the paint and I think he probably appreciates that.” During their stewardship, the Ponders had improved the car’s performance from mid 11‘s to mid-9‘s. Grinwald then started a five-year program to continue the quickness. He built a little more motor and then went to work on the the details. Concentrating on removing weight from the front bumper to the windshield, Grinwald removed all items irrelevant to racing, (for example, heater ductwork) and made all the others as light as possible, from fiberglass fenders to lexan windows. No item was too important (engine block) nor insignificant (bumper bolts) to consider. “In total, it came to about 300 pounds,” said Grinwald. In addition, the vehicle’s weight distribution scaled in at almost 50/50. The changes gradually decreased the elapsed times to 9.25, 9.00 and then into the high eights. Grinwald wants to credit two fellow club members, Len Grimsley Jr. with the ‘Fire and Faith’ Plymouth and Paul Habura with the ‘Keepin’ the Faith’ Plymouth for supporting his quest for speed. “We were doing a show at Joliet,” said Grinwald. “They said they needed another car to run with them and would be willing to tell me how. “I ran, didn’t walk, back to my trailer to get a notebook and we’ve been sharing information ever since. They were the first to congratulate me when I broke below 9.00, an 8.99 at Norwalk.” And so it came to be that in March of 2008, the ‘Elephant’ took unexpected flight, although first it was towed 2,200 miles to Las Vegas. At the Mopars at The Strip event,  his first with an aluminum block, Grinwald did two spectacular wheelstands, both an eighth-mile long with the rear bumper scraping the track surface.

The announcer said John carried this wheel stand for 350 feet – photo courtesy of NSS Inc   Recorded on video, the wheelies made the Elephant instantly world famous. The first caused an immediate addition of weight to the front of the cage. Nice try. The second caused addition of weight to the front of the car. Currently, those wheelstands are still one of the most viewed racing events on the internet, initiating the nickname of ‘Sky Pilot’ for Grinwald and the slogan ‘When Elephants Fly’ painted on the car. “The first was a surprise,” said Grinwald. “I was used to the car coming up but this time it kept going higher. I had heard in those situations to keep your foot in it and most times it will gradually settle down, so that’s what I did. Then the shift light came on and I pulled the next gear and the car went even higher. “I began to get concerned because I hadn’t seen things for a while and didn’t really know where I was at. So I started pedaling, fast, on and off, on and off and it finally came down. “When I got back to the pit, someone told me it had been on the back bumper and I thought, ‘no way’. But after looking the car over I could see the scrapes and rubber from the track.” The first project after returning home was the installation of wheelie bars. For now, while other racers have pushed the standard for the quickest NSS car into the 8.40’s and occasionally lower, Grinwald is content to maintain his current 8.70‘s level. “I don’t want to ruin what I have, either me or the car,” he said, “so it will be more of a preservation program. The emphasis will be on good wheelies and putting on a strong show.” Ever competitive, Grinwald continued. “Does it bother me when another driver beats me to the stripe? Yes, a little. But I can become sharper on driving. “I’m going to keep the car the way it is and concentrate on putting on a good show. There might be a few tweaks for safety but there will be no cutting on this car. I want the fans to see a good show and those high, long wheelies.”

The Ponders have experienced the same assimilation process into Nostalgia Super Stock that tends to happen when racers are exposed to the class. “The racing was great but the best thing was – and still is – being associated with the type of people who populate NSS,” said Tom Ponder, who along with Leslie are among the first racers inducted into the Nostalgia Super Stock Hall of Fame, along with the Campbells, Dave and Emma. The Ponders first raced with the original club, the Midwest Nostalgia Super Stock Association in August and September 1994 at Great Lakes Dragway and Byron; then were asked to join the club in 1995. “That was our first year of retirement and we hit the racing circuit hot and heavy,” said Tom Ponder. For several years – in addition to club shows – they raced in the National Muscle Car Association, the Chrysler Classic series, the SuperCar Showdown, the Ford Extravaganza, and the National Street Car Asscociation – sometimes more than 20 events each season. When Nostalgia Super Stock Inc. was formed in 1997, Leslie Ponder served as secretary until the end of the 2003 season. By then, the ‘Asphalt Elephant’ had found its new home with Grinwald. After selling the hardware to Grinwald, the Ponders had continued to attend club  events, as recently as last month. And they intend to keep doing that despite the sale of their Chicago residence and move to a warmer climate. “The people in NSS are friendly, generous and loyal,” said Tom Ponder. “They are also innovative and very competent. Why would we want to be with anyone else?” 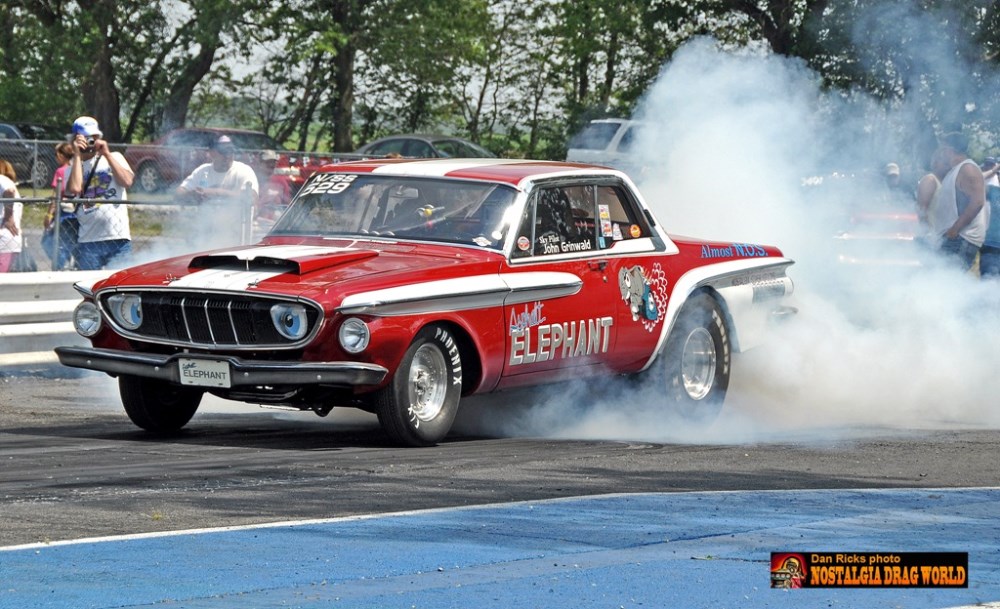 Always a fan favorite whenever it comes out of the trailer, the Asphalt Elephant 1962 Dodge Dart combines the unique styling of early 60’s Chrysler Corporation vehicles with very high performance to make it half of the most attention-grabbing NSS duos currently running, along with its companion car, the Asphalt Angel.

John Grinwald is married to Denise, and has two children, Chelsea and Nic. Grinwald, a former Dodge dealer, now owns several businesses, including Grinwald Ford, Watertown Body Shop and is a co-owner in Almost NOS, LLC. Also an expert in classic muscle car restoration, Grinwald, along with partner Rich Berlisk, won Best of Show three times with three different cars over a six-year period at the Mopar Nationals. Grinwald drove the Asphalt Angel five years in elapsed time bracket racing before taking over the steering wheel of the Asphalt Elephant.

With an East Coast origin, there is evidence the Asphalt Elephant  was first painted blue and is connected to legendary racer Bill ‘Grumpy’ Jenkins. A close friend of Jenkins is listed as a former owner in the sequence of title documents and the theory is that Jenkins at least did some set-up and tuning on the car. Owned by Denny Guest in the early 80’s, the 4,000 original miles machine acquired red paint and a reputation on the Chicago street scene as being able to ‘hook up’ and win anywhere before being bought by Tom Ponder, who authored the name. First replacing a mild 440 with an 11-second combo, Ponder then changed to an Indy 572 motor and floater rear suspension, eventually posting a 9.48, 142 mph best in NSS. After watching the car run at the Monster Mopar NSS Nationals at St. Louis in 2002, Grinwald acquired ownership and has continued the improvement process. “We’ve done a lot of experimenting and now are working on consistency,” he said. 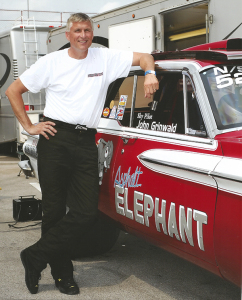