There are places in his life; specifically race tracks.

And there are people, too; many, many of them who unfailingly say good things about John Rousset. Some of those words are about his loyalty, some about his enthusiasm, while other people mention his friendly nature.

It is no overstatement to say he’s never had a day he didn’t enjoy at the race track. Even a rain-out is a day to rest, talk with friends and fans and look forward to a sunny tomorrow.

And lately with some attention paid to the 50th anniversary of the Beatles arrival and first concert in America, it was reasonable to think also think of the obvious song title which applies.

A Hard Day’s Night. That’s how it’s been for Rousset.

“Back then I raced a 383-powered Fury and it was also my daily transportation,” he said. “A Max Wedge was out of the question.”

There being no such person as a former United States Marine, some active duty time in Vietnam and then a many-year career as a field service technician for The Johnson Service Company, now known as Johnson Controls Inc., earned Rousset a solid middle class living.

But those jobs provided no pass to the paved portion of the pits. In older but fonder terminology, he is the veteran pipe-fitter and in the best sense of the metaphor, a free and self-sufficient man, an American cowboy.

Later, there was retirement, a disabling back injury, surgery and then a determined and remarkable physical comeback which now allows him to continue single-handed both driving and servicing a current race car more potent than that 383 Fury.

Rousset must have been the kid in school who raised his hand to volunteer for every new project that came along. When the club’s season schedules are arranged and event roll calls are made, he always has one of those big mitts in the air, saying, “I’ll be there.”

A charter member from the 1997 reorganization into Nostalgia Super Stock Inc., this spring Rousset will have earned another perfect attendance award, adding to a large collection.

In earlier years he worked off an open trailer, then out of of a small 20-foot enclosed trailer, unfinished with only bare plywood interior panels, not even a work bench. But that was enough. 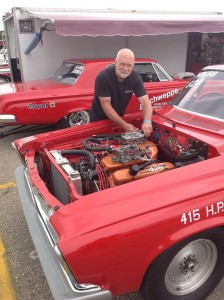 In terms of technical know-how, few in the business are Rousset’s equal in getting a Super Stocker down the track in the most efficient way.

In a race-track repair situation, there isn’t literally any well-designed repair that he could not figure out and come up with the material for.

Now, the hard days and nights are a little easier.

There’s a well-deserved but still earned luxury, a larger trailer with a finished floor, wall panels and a work bench. But as always, when evening’s fatigue fades into fuzzy consciousness, Rousset doesn’t mind putting down his saddle roll and sleeping on that floor.

And the tackle box and track knowledge compartment both have a little more in them too.

As if drag racing isn’t enough action, some of Rousset’s other hobbies include bow hunting, bird hunting, training his bird dogs, bass fishing and bicycle riding.

Rousset’s racing with Hard Day’s Night has all been all done with an original factory crossram intake and carburetors. He will tweak a little with internal components as allowed but the top of the motor is going to look the same.

“I’m not going to do anything with the (factory) appearance,” he said. 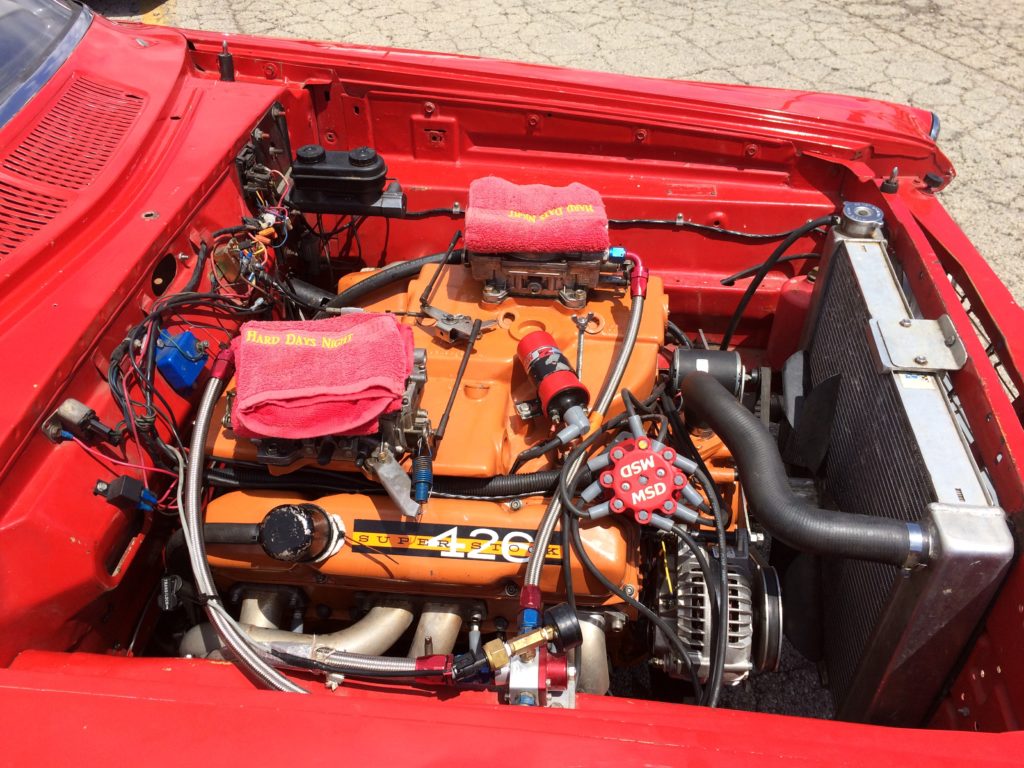 One of the outstanding features about Hard Day’s Night is the way it leaves.

No bouncing, jumping, wiggling, wobbling. Plant the rear tires at the hit, the body solid and steady, hiking the the front tires slightly off the ground and is GONE, in a straight line down the track. No wasted motion, the machine just goes OUT and does it.

Kind of like the man. What else will he accomplish? We can only imagine.
—————————
(Author’s Note: The topped-off tackle box is not a metaphor. Also a former technician for Johnson Controls, I can first-hand testify that the company’s culture was save, scrounge, fit and fabricate, best solution on the spot; like the cowpuncher on the prairie.)

Like most of us in 1963, ‘Hard Days Night’ owner John Rousset didn’t know how many difficult days and nights had to pass before he got the car he dreamed of. But now it looks like the wait was well worth it. “Back then I raced a 383-powered Fury and it was also my daily transportation,” he said. “A Max Wedge was out of the question.”

A Missouri native, John Rousset is retired after a long-time career as a pipefitter and service technician for Johnson Controls Inc. Rousset started drag racing with a street/strip style 1963 Plymouth Sport Fury, “until the Marine Corps and the Vietnam War came along,” he said.
While living in California after his military service, Rousset somehow managed to stay away from racing but upon moving back to Missouri in 1986 he again got drag fever. “I was around friends who were still racing,” he said. “The urge got too great so a project was in order.”

After spotting a 1963 Plymouth Savoy resting in front of an abandoned house in the Missouri countryside, Rousset found the owner and then began a busy 18-month period. The survivor was disassembled down to the unibody and then rebuilt as a Max Wedge replica, including replacement floor pans and a deck lid from two donor cars. All the work, including paint, was done by Rousset starting in 1993.