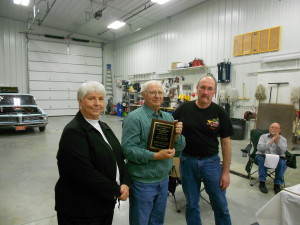 Back in the early 90’s when the Nostalgia Super Stocks came about we had no idea that the club would still be going as strong as ever some 23 years later.

It was a pleasant surprise to be selected as the first inductee into the Nostalgia Super Stock Association’s Hall of Fame.  To be recognized by your peers is truly an honor.

Through the years we were blessed with many wonderful memories and good friends.  We truly miss not being around our Super Stock Racing Fraternity on a regular basis.  All of you are like family to us.  Emma and I cannot thank you enough.

We would also like to congratulate our dear friends Tom and Leslie Ponder for being selected to the Hall of Fame with us.  It was always a fun time when Les (Penny Pincher) and Tom (Bargain Hunter) Ponder were around.

Thanks for all the memories it was a great ride. 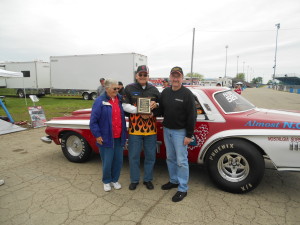 We first raced with MNSSA in August and September 1994 at Great Lake Dragway and Byron.  We were asked to join the Club in 1995.  That was our first year of retirement and we hit the racing circuit hot and heavy.  For several years, besides Club events we raced with NMCA, Chrysler Classic, SuperCar Showdown, Ford Extravaganza, and NSCA – sometimes making 20-22 events a summer.  When the current NSS Club was formed in 1997 Les served as secretary from then until the end of the 2003 season.  At that time the Asphalt Elephant found its new home with John Grinwald.
We are honored to have been selected as first year members of the Hall of Fame along with Dave & Emma Campbell – founding members of the Club. 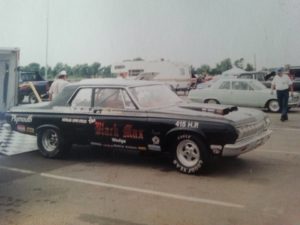 History shows Mike started racing with our club during the 1994 season. Mike was one who built the total car himself in his garage, a single car garage at that! He did not paint it himself but if it had gotten to the point it became necessary, he would have done that too. His 1964 Plymouth Savoy was patterned after a factory Max Wedge super stock car he was familiar with as a teenager in Kansas.

He started out with a black car, no lettering. For the 1995 season Mike named the car Danger Zone and added decals on the quarters. In 1997 Danger Zone was gone and Black Max was born. Black Max was there for the remainder of his career.

In 2002 Mike sold Black Max to a racer in the Denver area. He had met his goal of running a 10.50 at every track where the Club raced. With that behind him, he moved on to be with his two young sons and anticipated the time he could retire.

Unfortunately, after a lengthy illness, Mike passed away on February 20, 2011. For those of us who knew him, and his quick wit, we could always count on a new “Mike joke” at the races plus his desire to help any racer in need. Mike has been missed by all of us who knew him. 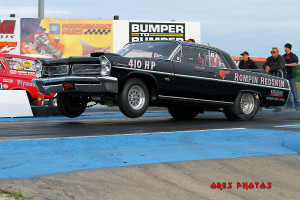 After reviewing a career of dedication and accomplishments almost impossible to overstate, the Board of Directors and then the general membership voted unanimously to induct Joe and Cheryl Zajac into the Nostalgia Super stock Inc. Hall Of Fame as of April 2017.

The Zajacs, a husband-and-wife team who worked together in the finest sense of combined service to the sport, did most everything that needed to be done, from building and running an NSS car to organizing and managing the logistics of the supporting corporation.

Joe Zajac served as president of the corporation for almost 20 years, guiding the transition of the original Midwest Nostalgia Super Stock Association out of the chaos of a rebellion and building Nostalgia Super Stock Inc. into a reliable and consistent producer of specialty automotive exhibitions known for high quality ands exciting shows year after year.

Cheryl Zajac served as Nostalgia Super stock Inc. treasurer, a position away from the attention of the on-track show, but no less vital to the health and steady functioning of the surviving corporation.

Together, the Zajacs will always be remembered for the “Rompin’ Redskin” 1963 Pontiac, but for more than that: the togetherness of their personal partnership which they extended into a larger concept – that unity and the benefits of that vitue can improve the lives and experiences of so many more people than we all thought possible. 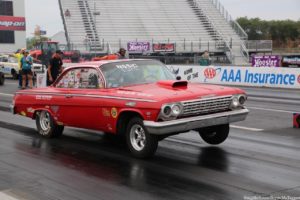 Going back into the founding days of the Nostalgia Super stock concept, the board reviewed and recommended recognizing nad honoring the accomplishments of Kenny Gresham, who was one of the participants in the earliest years of the sport and continued his involvement into the second decade of the 21st century.

At the 2017 annual meeting, the general membership unanimously agreed, voting Mr. Gresham into the Hall Of Fame for his long-time automotive activities since he was a teenager but especially for his Nostalgia Super Stock contributions from 1987 through 1994, when the category was still in its foundation and early development.

With an independent and often one-man organization using a 1962 Chevrolet “bubbletop” with 409 power, Gresham was invited by other 409 pioneers such as Dave Campbell, Russ Campbell, magazine editor Doug Marion and promoter Len Greco into many of the initial NSS events and was a member in the original Midwest Nostalgia Super Stock Association.

Gresham, along with other racers and supporters, helped provide the drivers and vehicles which made possible the basis of the now defunct National street Car Association and the current National Muscle Car Association.

Gresham recorded several victories in those early events, but more importantly is especially appreciated for his unfailing friendship, eager enthusiasm, willingness to work in the best interests of the sport, and overall optimism.