The teacher has left the classroom but you can be sure there’s still a lot of learning going on.

After purchasing the ‘Teacher’s Pet II’ 1963 Plymouth from Dallas Peffley 15 years ago and joining Nostalgia Super Stock Inc., Bob Durling has made his stewardship of the car a continual process of improvement.

“You know how we are as racers,” said Durling, who had ran the car at approximately 11 seconds. “We can’t live without having to do something to the cars.”

For Durling, that something has included increasing the engine size to 500 cubic inches, tightening up the action of the torque converter and like thousands of Mopar racers before, changing the rear axle from the stock 8 3/4 to the more durable Dana 60 while keeping the same 4:10 to 1 ratio. 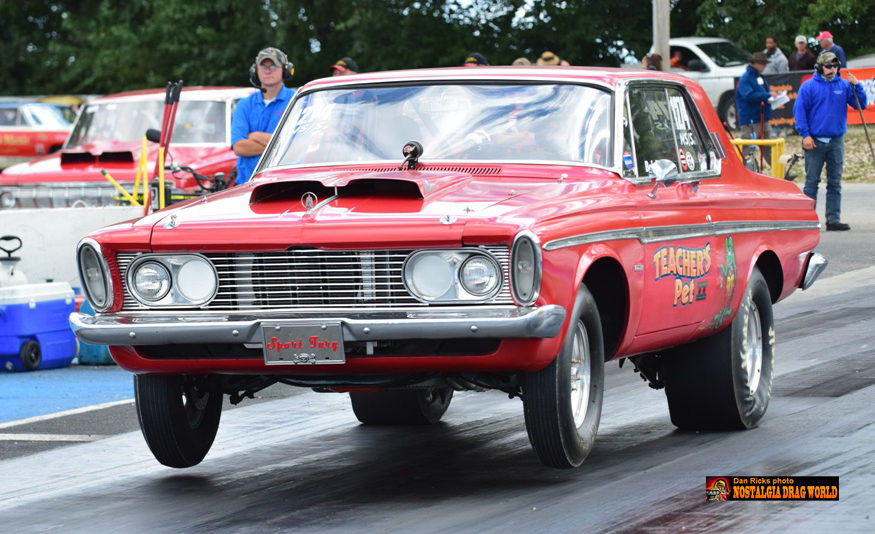 So somehow….. the horsepower has increased to a dyno-measured 730 horsepower with 680 feet-pounds of torque. This results in mid 10-second passes in summer heat and an an all-time best elapsed time of 10.32 seconds.

At the same time, however, Durling remains committed to the concept of keeping accurate appearances, such as running a period-correct crossram intake manifold and Carter carburetors. 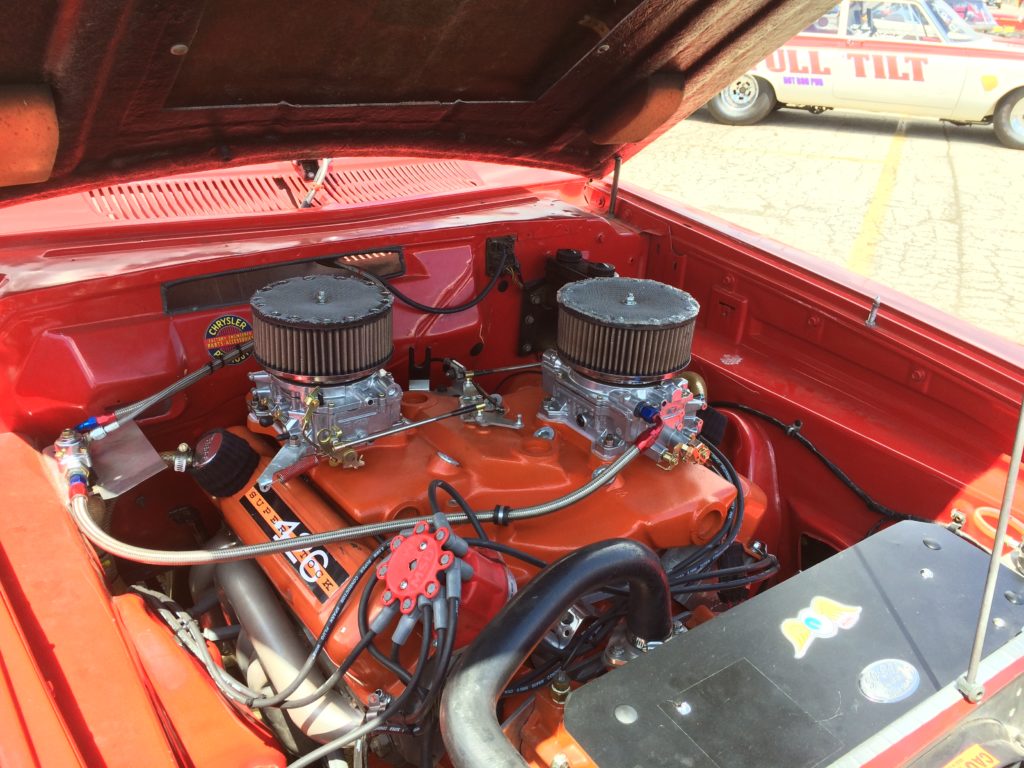 “It’s 500 cubic inches masquerading as a 426 because that’s the name of the game,” said Durling. “Because looking old and going fast is what people want to see. When I write 426 cubic inches on the tech card my wife (Diana) sometimes asks how I can do that.

“Anyone who knows what’s going on understands that we can’t get these kind of numbers out of the small motors. I say, ‘when people go to the movies do they actually believe it’s real? This is a show.” 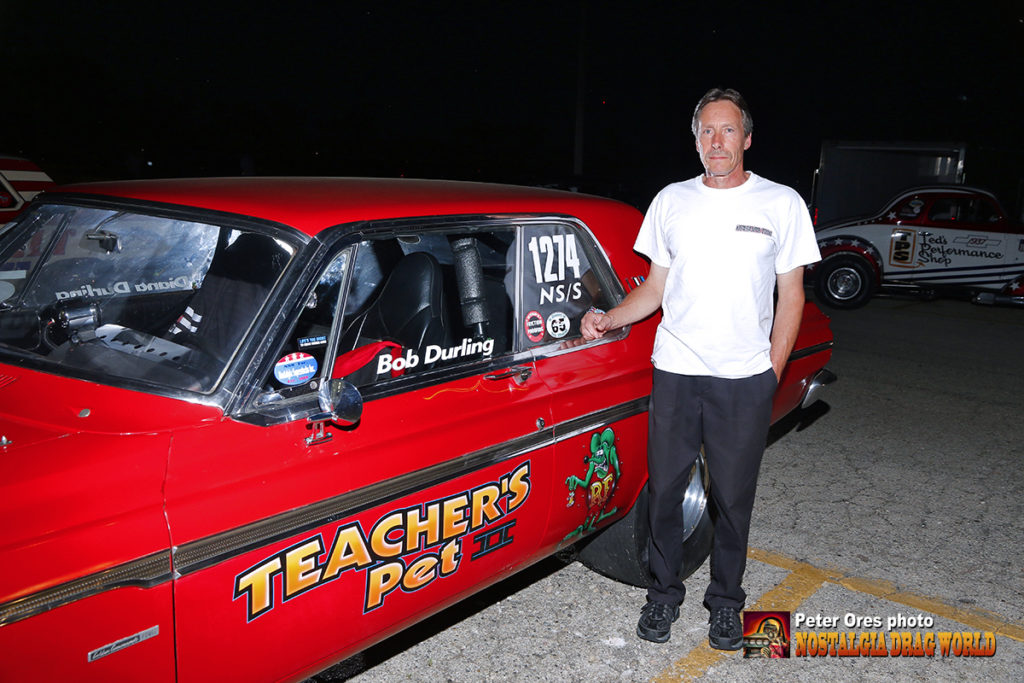 And Durling is a good enough showman that he and Teacher’s Pet II recently were runner-up in the Chicago-style final at Central Illinois Raceway (Havana) at its Spring Nostalgia event.

Durling’s approach to racing has been the middle path. 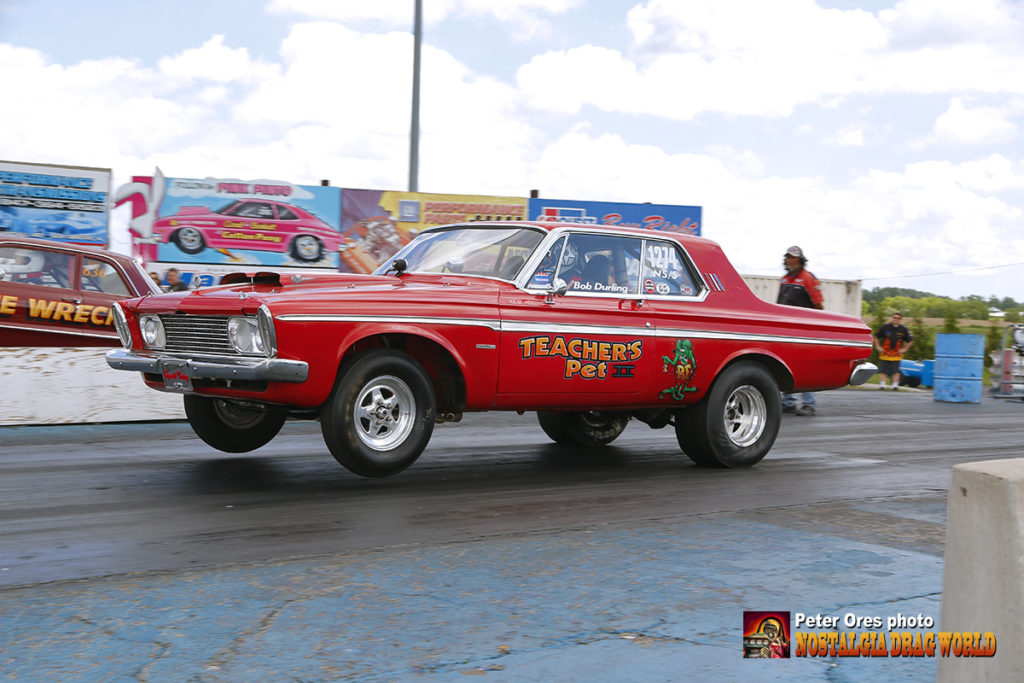 And consistent with that philosophy, his working career has also been the middle path. He worked as a front line mechanic for a General Motors dealership for 20 years before clocking another 20 years as a instructor of automotive technology at Lincoln Technical College.

Recently he took a position as a field service representative for the Hoosier chapter of the Triple A Motor Club.

“For no particular reason I just thought it was time for a change,” he said. “I work with some great people. My boss doesn’t micro-manage; most of the time he doesn’t even know where I am. As long as we achieve a good end result things are fine.

“Why would I retire? To do what? Perhaps there might be a change later but I haven’t decided on anything.” 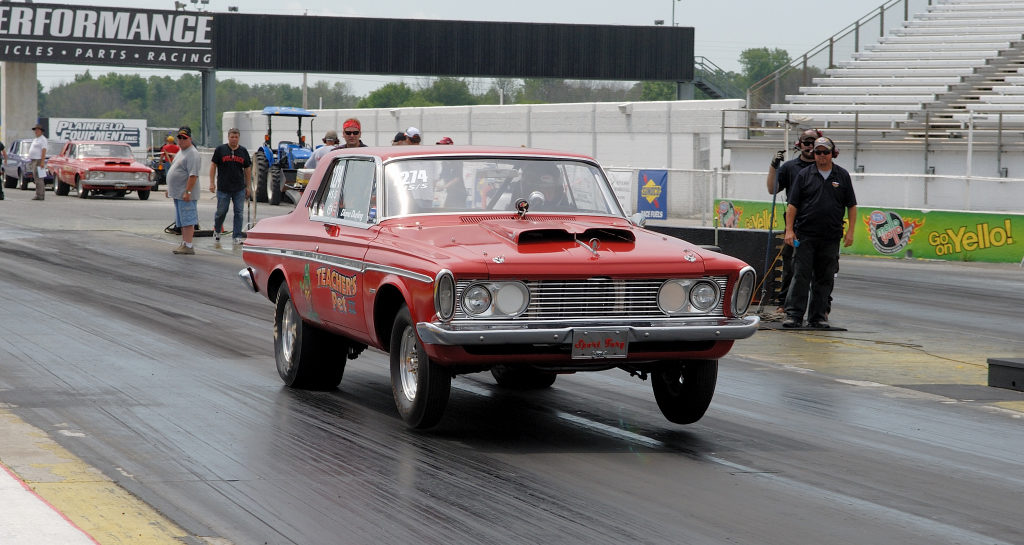 One possible scenario would be for his son, Ben, a veteran of 18 years in the United States Marine Corps, to drive ‘Teacher’s Pet’ after his retirement.

“He’s a killer on the ‘tree, “said Durling. “Recently we had a little outing and in eight rounds his worst reaction time was 0.027. But he needs to learn to drive the finish line better.”

Durling’s daughter, Bobbi Jo, has retired from the Air Force and is in the process of moving back to the family’s central Indiana headquarters but likely is not a candidate for seat time. “She’s a roller coaster maniac but has no desire to drive a car,” said Durling.

Adding that he couldn’t be more fortunate for having such a supportive wife, Durling has no desire to discontinue the current course, including enjoying spending time with his granddaughter, Emma.

“In this format we have a car show and a race all in one,” he said. “You can’t get a better situation than that.”

Peffley ran the car 18 years in the club under name ‘Shamoo’ so when ownership passed to During he renamed it ‘Teacher’s Pet II.’ When he left Lincoln Tech, Durling briefly thought about changing the car’s name again but decided not to.

“It was an honor to be able to buy it,” said Durling. “Cars like this one are like family members. He knew I would keep it as a nostalgia car.

“Dallas’s wife Donna and his son Robert recently put together a ’65 Plymouth. It’s not painted yet and some people don’t like it but that old patina is fine with me. They have been able to get it running in the 11.90’s on a tight budget. They know what this is all about.” 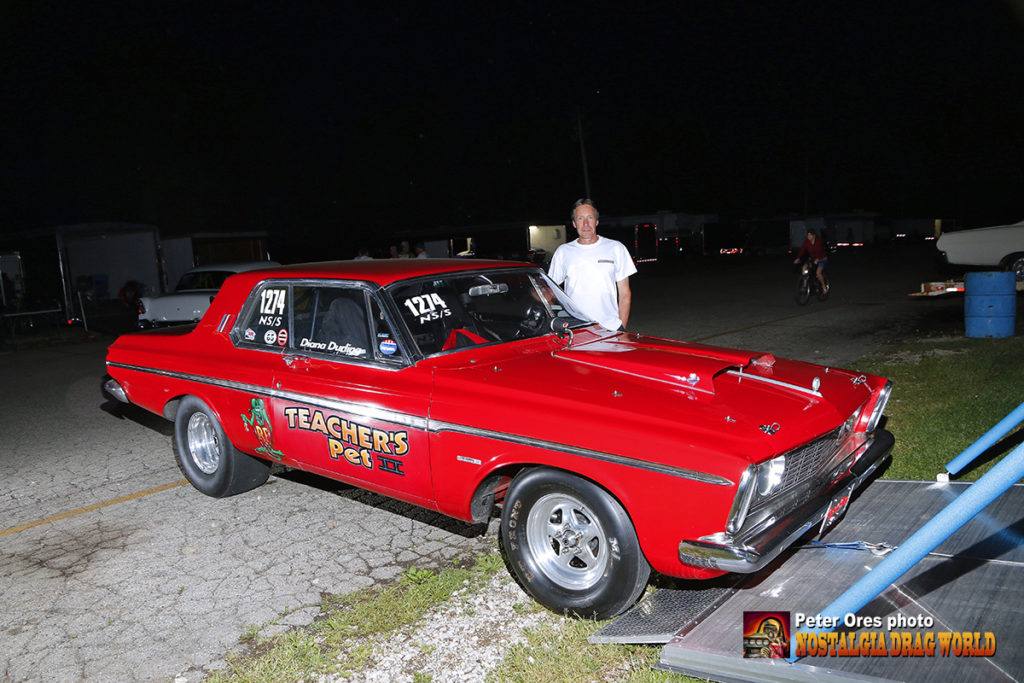 Combining the informal ‘School of Hard Knocks’ and Academy of Hard Work’ with formal college-level training, Bob Durling has educated many a race track opponent about how well a 1963 Plymouth Max Wedge Nostalgia Super Stocker can perform.

Owned by Bob and Diana Durling of Mooresville, Indiana / sponsored by Rick Allison of A & A Transmissions / crew work provided by the Durling Family, including Diana as crew chief, daughter Bobbi Jo (U.S.A.F.), son Ben (U.S.M.C.) and a granddaughter, Emma.

Bob Durling is an field service representative for the Hoosier chapter of the Triple A Auto Club of Indiana.

Originally named ‘Shamoo,’ this rare Max Wedge in a Sport Fury package was purchased by Durling from Dallas Peffley. The preparation for NSS racing, the mechanical updates and paint were done by Durling and Eric Ward with additional support from the students of Lincoln Tech. Subsequent updates have been done by Durling.

2016, Central Illinois Raceway (Havana) Spring Nostalgia Meet, runner-up in Chicago-style Shootout. “This car is still in a tuning process and should run another tenth or so quicker,” said Durling. “Sold my Chevy to race an old Mopar. Wow! How smart is that?”