Gary Gerard one of the founders of the website afxer.com made some calls to round up some altered wheel base cars to run at the second NEHRR and netted a half dozen. Two cars traveled from Wisconsin and Illinois and the other four from the East coast area. 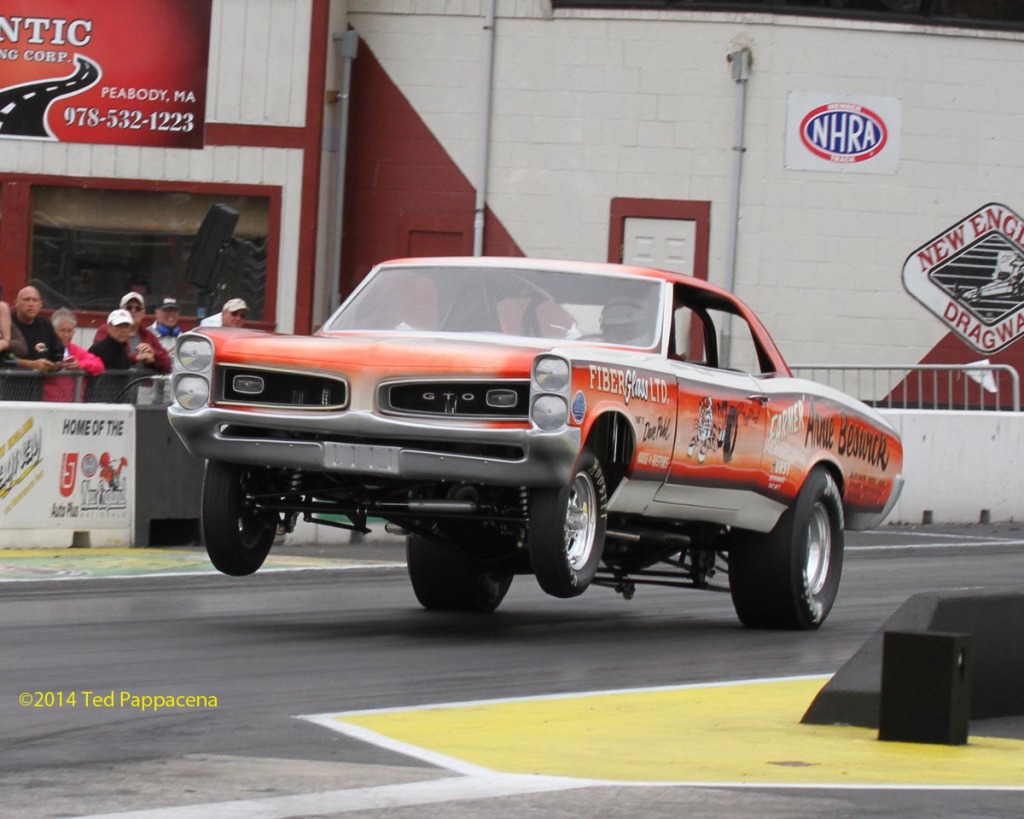 John Holmes with the original 1966 Arnie the Farmer GTO

The entries included John Holmes with the original 1966 Arnie the Farmer GTO.  John, age 60, resides in Oswego, Illinois as does his crew chief Mike Ehrhart. John is self-employed owning an auto repair shop along with a towing service. He purchased Arnie’s old ride in 2002 from one of Beswick’s neighbors, Russ Ottens who had it stored in a barn for alot of years.

The engine is 435 inches on alcohol fed by a Mickey Thompson blower manifold and aluminum Kaufmann deport heads. Turbo 400 trans and 4:11 rear gear, Strange Engineering suspension and brakes. Weight without driver is 2442 pounds. 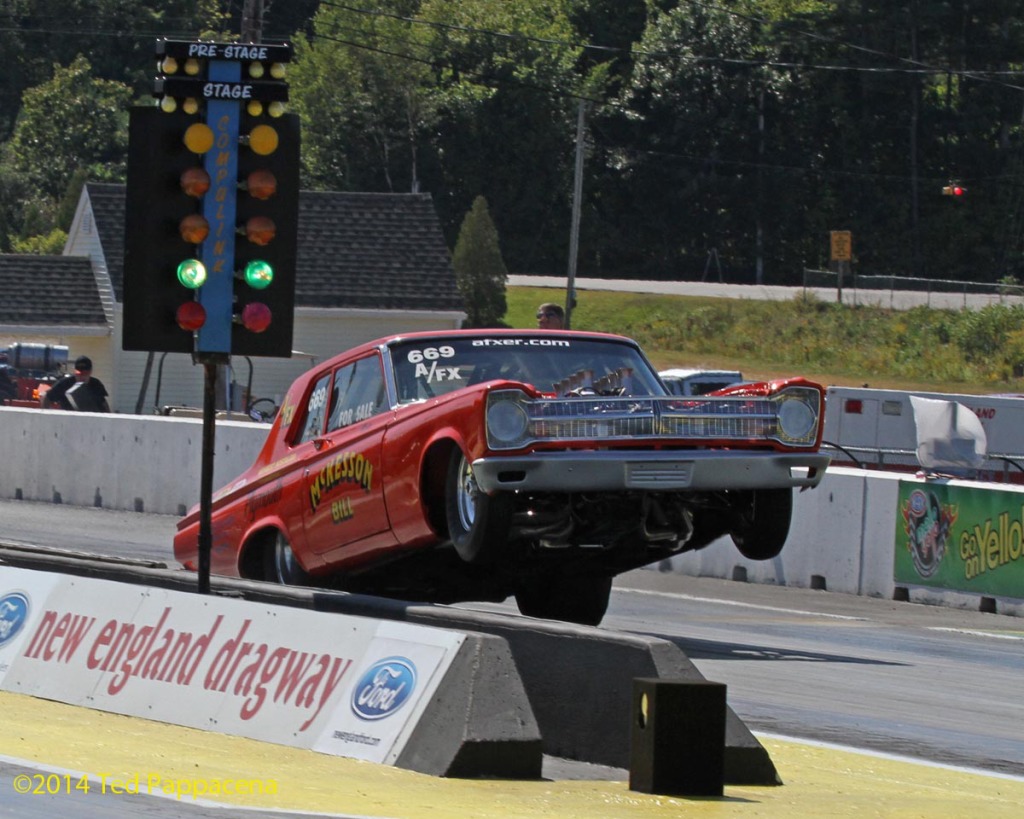 Bill Atwood age 53 from Westbrook, Connecticut, owns an automotive repair/restoration business and is the owner/driver of both 1965 Hemi Plymouth “Bill McKesson” car and also the 1965 Plymouth Hemi “FlashBack”.   The McKesson car, a 65 two door post, is a tube chassis car powered by a 489 inch 13 to1 Keith Black aluminum Hemi with Hilborn mechanical injection. Torqueflite trans with 4:88 gears at the rear. The car has run 9.50 quarter mile at 149 mph. This 65 Mopar loves to stand on its rear bumper!  Crew chief is Jim Macione. 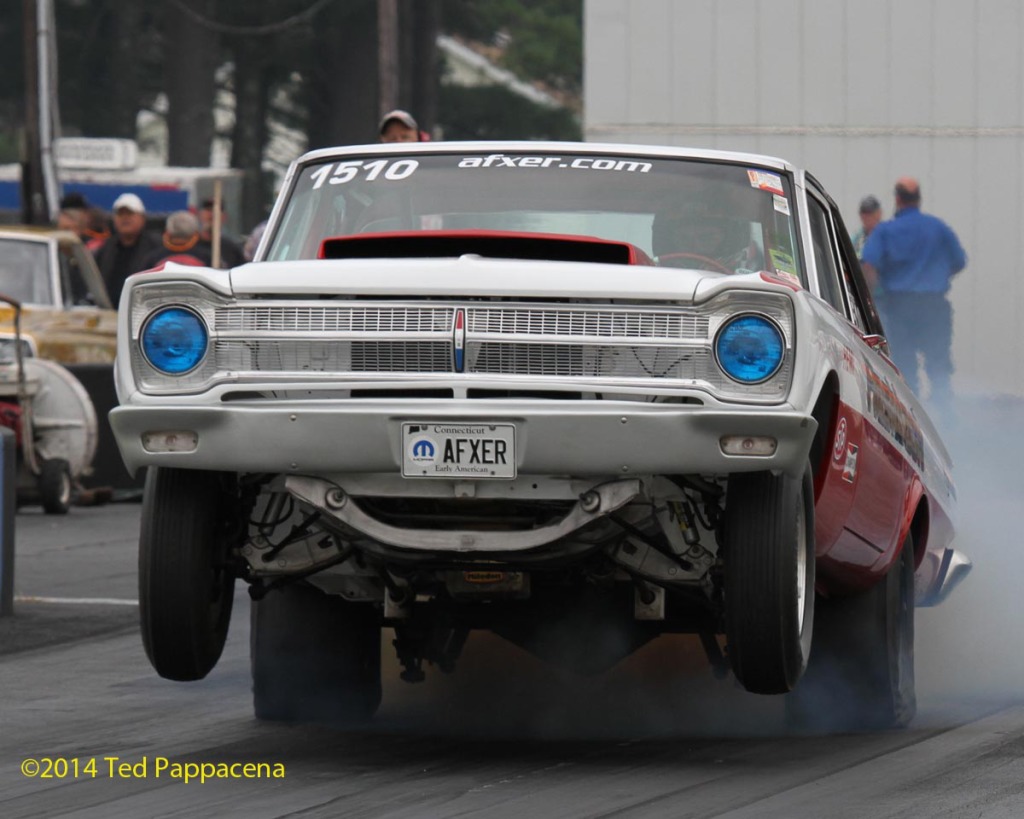 Atwood’s second car is a 1965 Plymouth hardtop altered wheelbase Called “FlashBack” built 8 years ago. Bill was inspired by his good friend Gary Gerard who helped create and build this beautiful piece. The 426 cube street hemi is a 10:25 to 1 pump gas motor built by the late Dean Nicopolis. Torqueflite trans hooked to a Dana 60 with 4:30 ratio.Weight is 3598 pounds with the driver and also gets into the wheelie mode. A 10.83 best quarter mile at 123 mph is not bad for this racecar that is also driven on the street to local car shows! 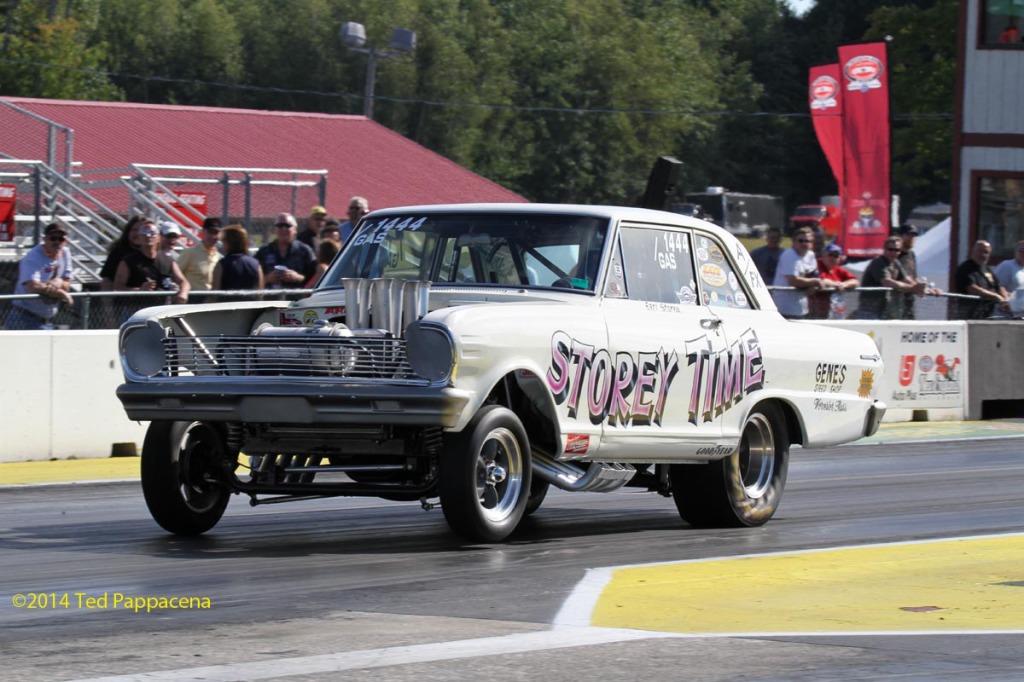 Earl Storey age 66 from Westboro, Massachusetts is the owner/driver of the 1965 Nova “Storey Time”. Earl built the Nova in which he finished in the fall of 1999 and made its first passes in October of 99. This is an old school Hilborn injection system that is fed alcohol. The rear axle was moved forward 11 inches and the front moved 5 inches according to Earl. The car remains “all steel” except for fiberglass bumpers and still has all the original glass windows. Best quarter mile 9.69 at 139 mph. This Nova also pulls some nice “wheelies”. 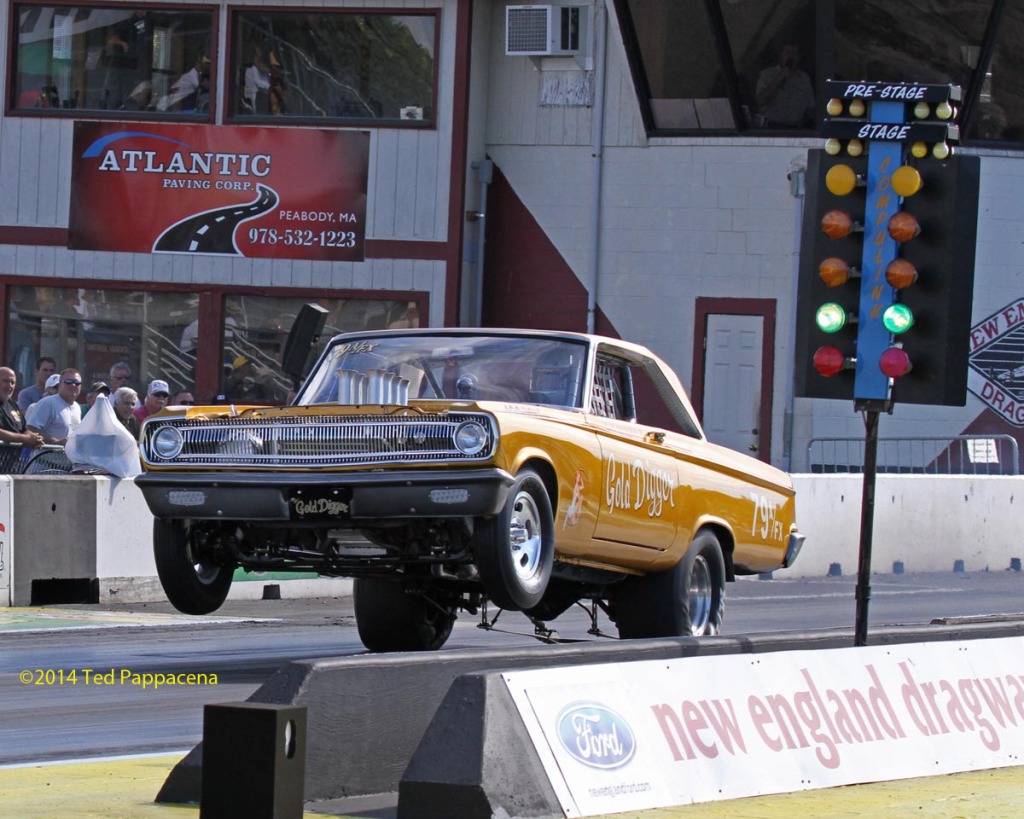 John Grinwald from Watertown, Wisconsin age 60 owns a new car dealership and is the owner /driver of the 1965 Dodge “Gold Digger” altered wheel base car. Crew chief is Rich Berlisk of Hartland WI. The body is fiberglass fenders, doors , trunklid, bumpers and dashboard. Also sports a lexan windshield. It boasts a 572 inch Hemi built by Opel Engineering of Streamwood, ILL. Kinsler mechanical injection feeds this bigboy a diet of 116 octane VP. A Protrans torqueflite is hooked to the Dana 60 which has 3:73 gears.The Gold Digger made its first pass late in the 2013 season and is also getting some runs with the Nostalgia Super Stock Inc. group this season. Digger’s best passes are high 8.60’s in the mid 150 mph area. 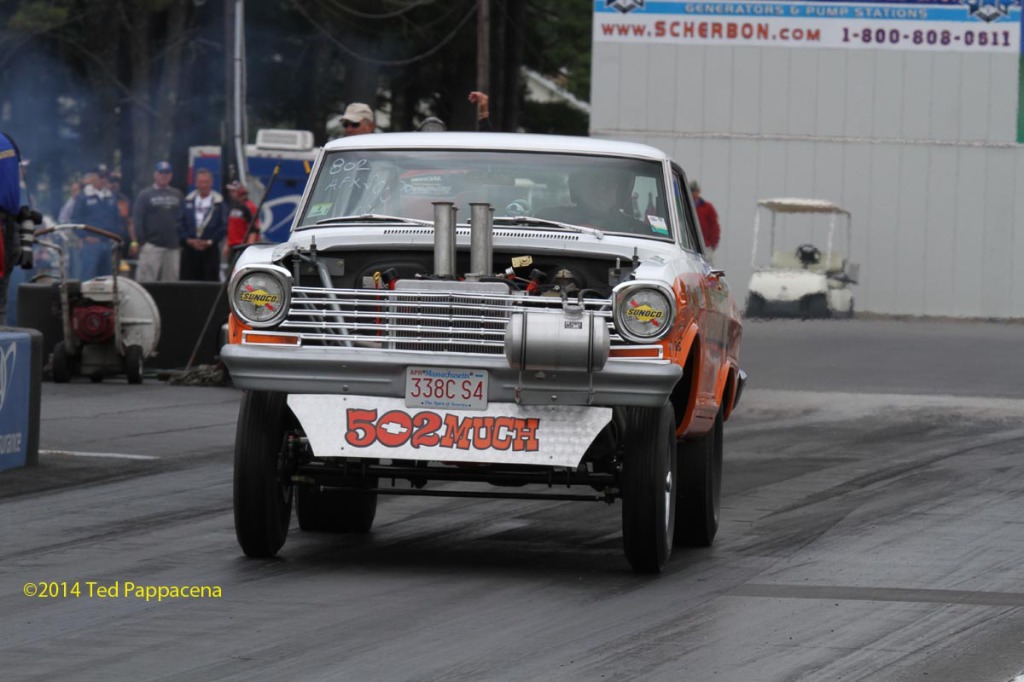 Steve Magnante age 50, TV show host and automotive journalist is from North Brookfield, Massachusetts and is the owner/driver of the 1963 Nova called “Willshire Shaker”. Steve built this beauty of a  car between the years 1998 and 2003.Steve did a feature article in the May 2001 edition of Hot Rod if you really want to get all the facts and tips to the building of this fine example of a Nova altered wheel base car see the publication. This is a 502 Chevy big block with Hilborn EFI. The best quarter mile pass is 11.1 at 115 mph. This car is also street driven as is Steve’s 1965 Dodge Dart altered wheel base “Rampage” in which he drove several hours to New England Dragway for this event. He also has a complete book “How To Build Altered Wheelbase Cars” by Steve Magnante. 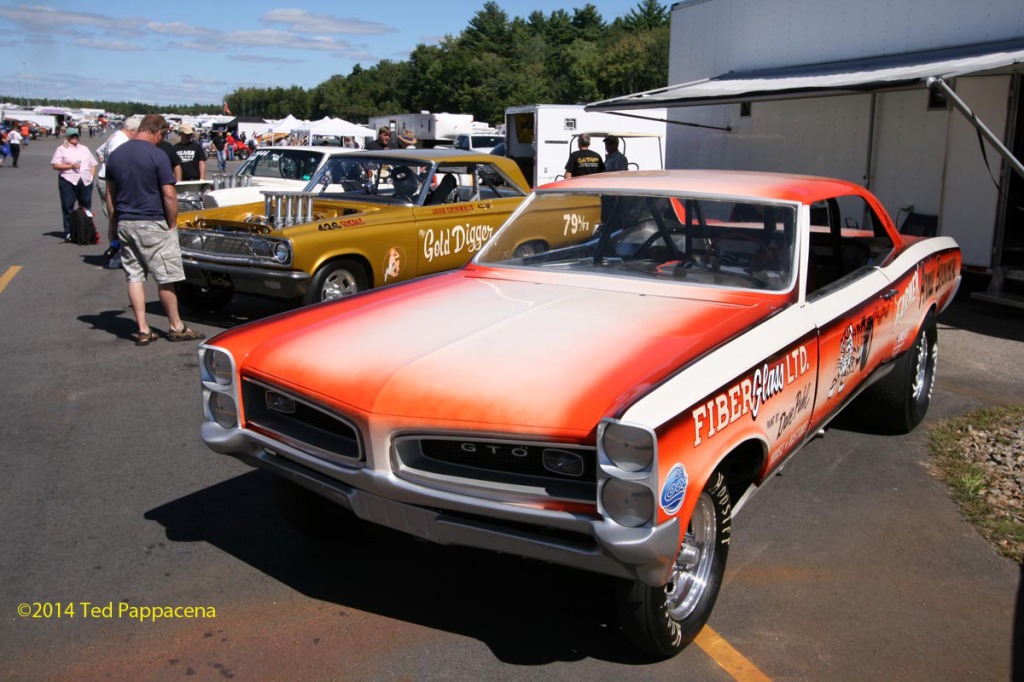 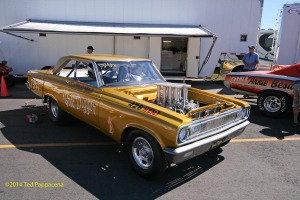 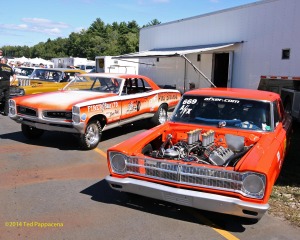 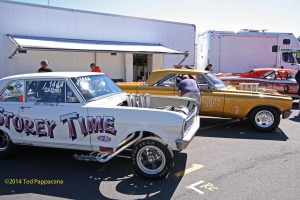 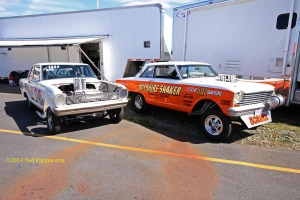 Now that we set the stage of the players for the weekend, lets get into the racing action.

Temperature in the mid 60’s with altitude at 775 above sea level.

Mc Kesson car was broke and Atwood drove to 3 1/2 hours to home base to get his backup car “FlashBack”.

Saturday runs- Temp at 10 am is 61 degrees with the air density at 125 feet above sea level.

This turned out to be the last two cars to run in the event as it started to rain and thus ending Saturday’s program.

Sunday 10 am temp was 59 degrees with the altitude at 235 feet above sea level.

Meanwhile Holmes and Grinwald battled once again with the Arnie car taking the stripe with a 8.602 at 154.42 mph to Grinwald’s second consecutive rear wheel 60 foot time and running a 8.760 at 152.83.

Run 2 and finale at 4pm: Bill Atwood in his “FlashBack” 65 Plymouth squared off with Earl Storey’s 65 Nova “Storey Time” in which Atwood got the win on Storey’s red light which was to early to get a time slip on. Atwood posted 11.621 at 113.90.

The final run of the weekend for our class at 4pm set up the stage for the two fastest qualifiers to face off in one run with the winner to receive the coveted HRR trophy in the exibition class.

That put John Holmes in the “Arnie The Farmer” 66 GTO in the left lane and John Grinwald in his 65 Dodge “Gold Digger”in the right lane.

Here is the final run:

This was one great match for the spectators to watch as the Hemi powered Dodge had the front tires in the air for 200 plus feet down track and earned the win. The GTO was trying to make up real estate near the stripe but fell a little short at the end. Great race John and John, hellava show!! Congrats goes out to John Grinwald on the win making him the Champion!

All in all, in my opinion the AFX  Altered Wheel Base exibition class at NEHRR was a definite hit with the fans as I witnessed a lot of attention and pictures being taken in the pits.

Unfortunately we didn’t get to see Steve Magnante’s 63 Nova make a pass due to an oil leak on the starting line.

A big thanks goes to Ted Pappacena for his excellent photography of the AWB cars at this event.

I’d like to thank Gary Gerard and Steve Atwood for getting these altered wheel base cars together for this event. I can only hope that this weekend will trend into more AWB get togethers.

After all, these were the cars that were the beginning of the funny car class.

One special thanks goes to our chef for the weekend, Mike Reynolds of Killingworth, Connecticut who worked years ago at the Cal-Neda Resort in Lake Tahoe Nevada and was one of Frank Sinatra’s chefs. Thanks Mike the food was great!

2015 will be the 50th anniversary of the altered wheel base cars. Watch the afxer.com site for something to commemorate the occassion!!