This month’s story line is outstanding. It has the paradox of being familiar and unique at the same time – it could be described as a design of devotion.

The structure’s first leg is not complicated, nor uncommon. Young man desires race car, gets race car, enjoys running the race car. For the second leg, the young man sells race car, then regrets the sale. As the years go on, the now middle-age man and his young son hope to reacquire the car.

Of course, in life and racing, getting what you want is not easy, and once it’s gone, getting it back is not guaranteed. 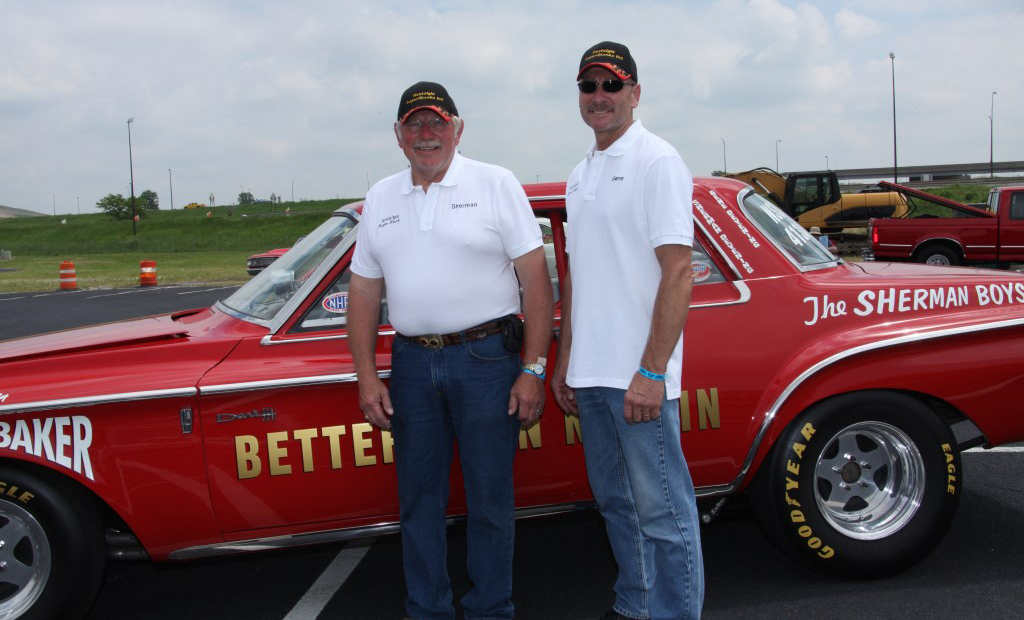 For the father/son partnership of Sherman and Gene Devening, getting that third leg built has been quite the process.

And before that construction could even start, it took the determination of a devoted woman to make it possible.

Putting aside the human drama for a little while, the ‘Better Than Nothing’’ 1962 Dodge would be a technical story in itself.

As researched by the Devenings, the car was special-ordered by Jack Maholland as one of five Max Wedge 330 sedans built in the 413 cubic inch, 420 horsepower, 13 1/2:1 compression ratio specification, out of a total series production of 214 units.

Also with a radio delete, making it a one of one, the build date of June 23, 1962 is evidence that it was likely the last 1962 Dodge Max Wedge to roll off the assembly line, with Maholland himself behind the steering wheel. 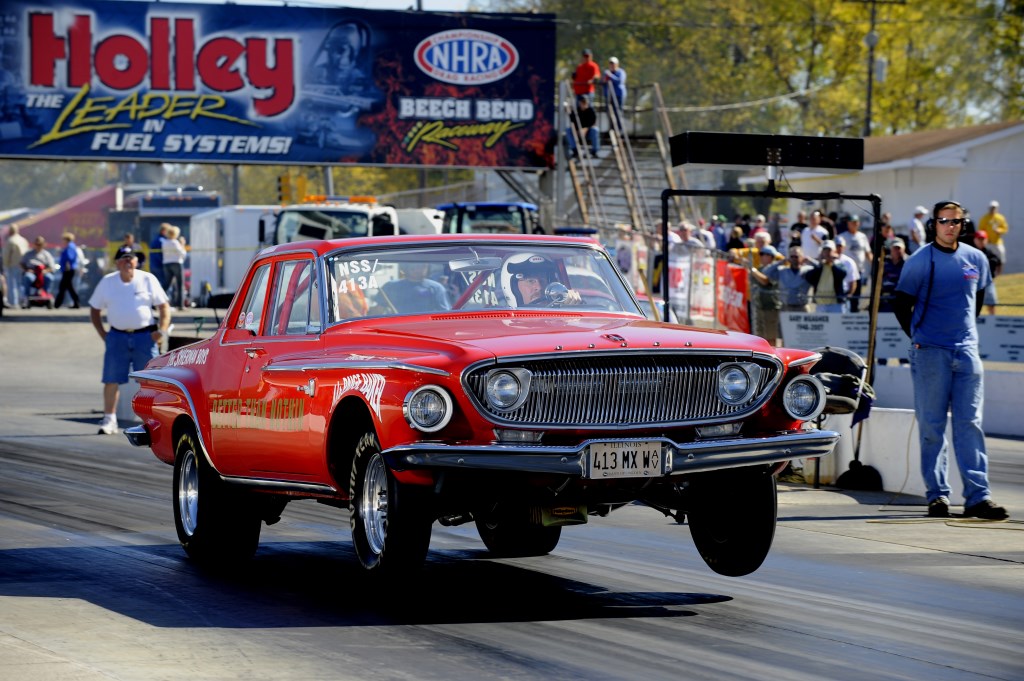 “The car has never been driven on the street,” said Sherman Devening.

The original motor lasted about one month before succumbing to main bearing failure, a common malady at the time. The engineering theory is that the oiling system was just not adequate to protect the bearings from the high cylinder pressures.

A 426 cubic inch power plant was installed under warranty and Maholland raced the car the remainder of the 1962 season.

During the off-season, the car was acquired out of Jersey County Motors (Jersey County, Illinois) by Mike Ritter, who named it the ‘Jerseyville Jumper.’ He raced the car through the 1963 and 1964 seasons.

Finally in autumn 1964, Sherman Devening and Sherman Orris took ownership and renamed the car ‘Better Than Nothing.’’ Of course, by that time Chrysler had raised the ante.

“We were glad to have what we had because not everyone could afford to run the Hemi,” said Sherman Devening. 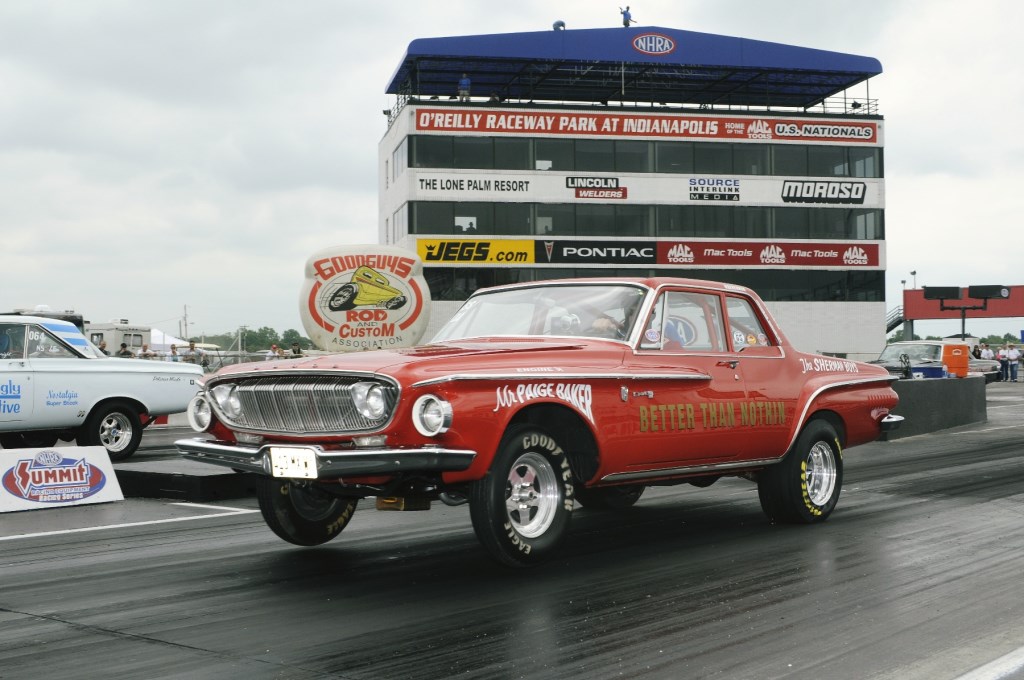 Lifting the wheels at Indy

The partners shared all the racing responsibilities, including driving. They ran at western Illinois tracks, including Alton and Nashville, an 1/8-mile strip. “I had a good win at Alton one night,” said Sherman Devening. “That was enjoyable. We were running in the 12.20’s and trying to get in the eleven’s.”

At one point, they removed the front bumper but were careful to preserve all the parts and never cut anything. Their quest continued through 1967 and then the car was parked.

Meanwhile, Orris had served a tour of military duty in Vietnam, meeting Ron Dyer, a fellow veteran from the Springfield/Rogersville, Missouri area. Sometime during 1969, Orris and Devening sold the car to Dyer, who continued racing it.

All the owners of the car shared a mutual appreciation for and devotion to the car and had stayed in friendly contact through the 1970’s. However, by about 1980, both the car and connections had began to crumble.

As 1986 rolled on, the Nostalgia Super Stock era was beginning, especially in Missouri and Gene Devening had graduated from high school. His enthusiasm for the history and Sherman Devening’s growing regret provided a spark to find the car again. 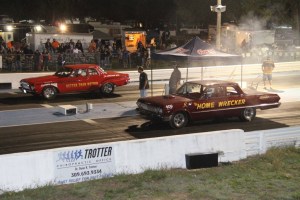 While on a trip to Texas to visit family, the Devenings drove through the Springfield area while working a lively debate about whether or not to try and contact Dyer. Sherman’s wife, Betty, took the lead.

“We stopped for the night and I went into the bathroom to take a shower,” said Sherman Devening. “By the time I got out, she had found Dyer’s phone number and had been talking to him a while.”

Dyer was reluctant about parting with the prize but Betty Devening kept working.

“She told him she would have to tell one very disappointed youngster that he wouldn’t get a chance to get his father’s car back,” said Gene Devening.

Finally, they all agreed to meet at Dyer’s rural residence, where the car sat under a tree without an engine or transmission but still with all its original glass and sheet metal panels intact and in relatively good condition.

Their previous friendship and Dyer’s dilemma – coping with a divorce on shallow pockets and no place to properly store the car – probably played to the Devening’s advantage.

“After I promised not to drive the car on the street, he agreed to sell it back to me,” said Sherman Devening.

At this point, you might think ‘mission accomplished’ but not so. “It took another 15 years to get all the parts we needed to put it back together right,” said Sherman Devening.

After the car’s restoration was finally finished in 2001, the Devening’s attempted to contact Dyer again but all suffered another disappointment.

“We didn’t have current information but were able to finally get an address,” said Gene Devening. “We literally drove down a one-lane dirt road in the woods and found the house. But his widow told us he had died six months before.”

The Devenings went right into racing, Gene for the first time and Sherman for the second. 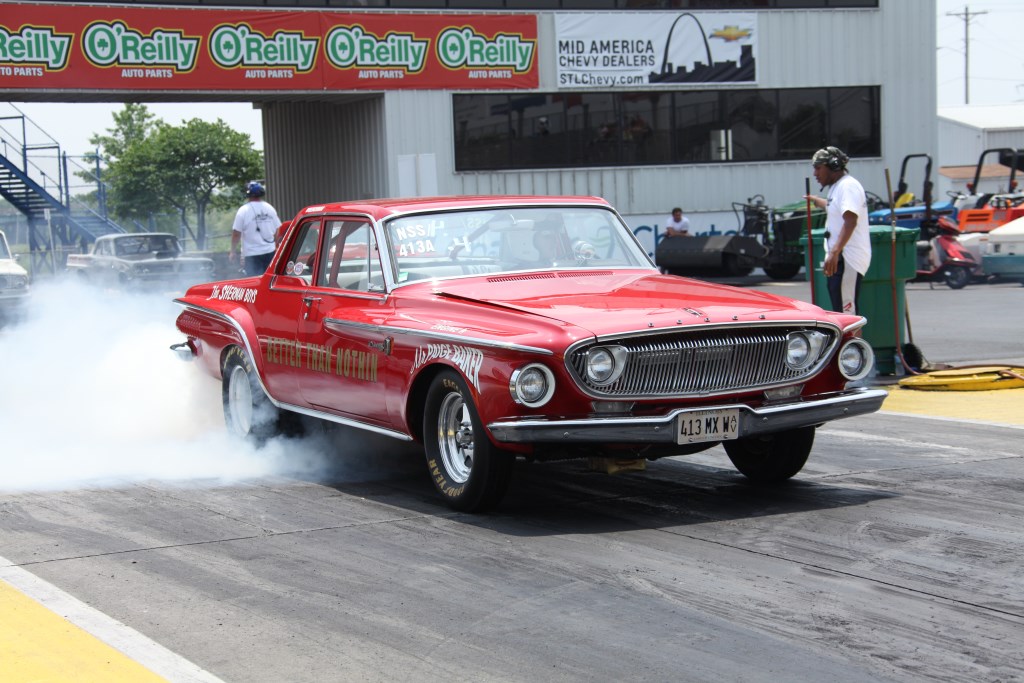 They lived through a highlight/lowlight situation in 2010 at Gateway International (Madison, Illinois) at the Dave Duell Classic Nostalgia Super Stock Nationals. That race featured the all-time record NSS car count of 84 and Gene Devening drove down to 10 cars remaining.

He survived a -0.008 red to his opponent’s -0.028 red but then was unable to make the next round because of a cut tire. “That was disappointing, of course,” said Gene Devening. “But that was also the first time we went into the ten’s.”

For the future, the goal is get to 10.50 without enlarging the motor. “I think the car will do it,” said Gene Devening. “It tends not to pull on the big end after the 1/8 mile. We can do something with the cam to improve that. There are some things we can do.”

But the structure becomes a quadrangle in recognizing the role of a mother’s love. 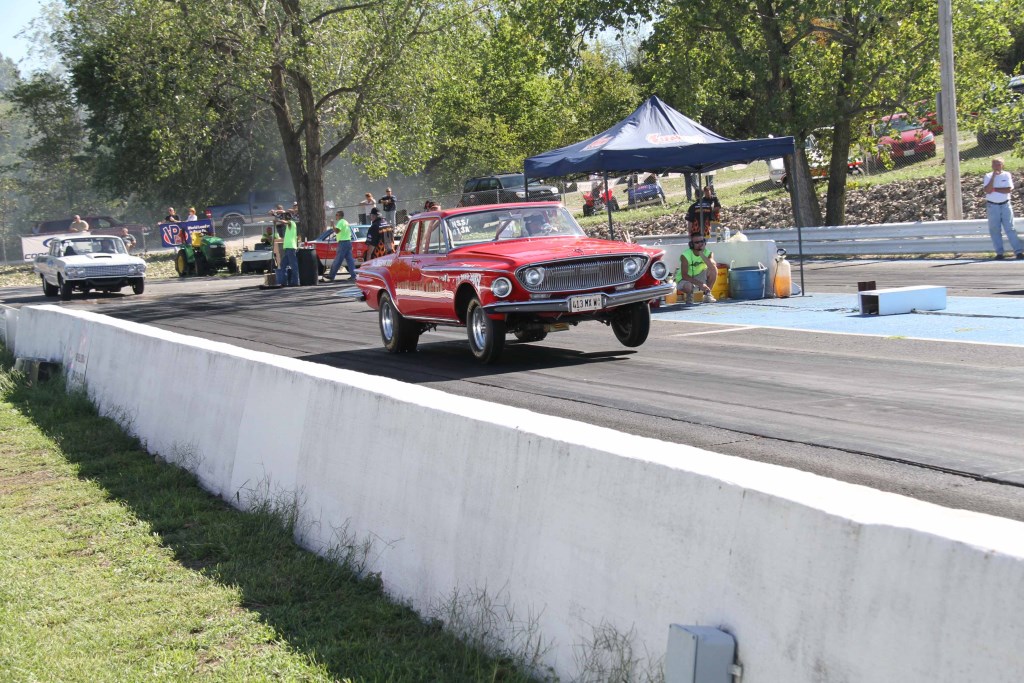 Most times, once a car is sold it’s gone forever but Sherman Devening is the first to admit he got lucky. Devening got the opportunity to repurchase ‘Better Than Nothin’’, a factory-original 413 Max Wedge 1962 Dodge Dart 330 two-door post sedan which he had owned and raced in the 1960’s. “We are very fortunate to get a second chance with this,” he said.

Owned by Sherman and Sherman (Gene) Devening of Kane, Illinois / supported by the Devening Family, including Betty, Dianne, Adam and Keaton.

Two drivers: Sherman Devening (father) is a retired machinist who had raced Better Than Nothin’’ and various other cars in the 60’s and 70’s at dragstrips in Alton, Nashville, and Whitehall, Illinois.
Gene Devening (son) works at the Wood River (Greater St. Louis metro area) electric power generating station. After starting his race driving career behind the steering wheel of ‘Better Than Nothin’’ in 2001, he is now the full-time driver.

A late model year production car (June 23, 1962), likely the last 1962 Max Wedge Dodge made, Better Than Nothing’’ was special-ordered (13 1/2:1 compression and radio delete, one of one) from the factory by Jack Maholland, who drove the vehicle off the assembly line himself. Maholland raced the car from June 1962 until the end of that season. The following year, Mike Ritter (Jersey County Motors) took control and named the car the ‘Jersey Jumper’ for the town of Jerseyville, Illinois.
In the autumn of 1964, Sherman Devening and Sherman Orris acquired ownership and renamed the car ‘Better Than Nothin’’ because of a new Chrysler product. “We were glad to have what we had because not everyone could afford to run the Hemi,” said Sherman Devening.
Devening and Orris continued racing until the autumn of 1967. In 1969 they sold the car to Ron Dyer from southwestern Missouri, who kept the vehicle active into the 1970‘s. By the mid-1980’s, the car was no longer functional. However, Sherman Devening was able to reconnect with Dyer, who eventually sold it back to the Devenings in 1986.
The Devenings spent 15 years restoring the car to its original factory condition and then continued its racing heritage by joining the growing number of NSS racers.

Reacquiring and restoring this piece of American History is achievement enough for anyone. However, Gene Devening drove through an all-time record 84-car NSS field to the final 10 competitors before falling aside with a flat tire at the 2010 Dave Duell Classic Nostalgia Super Stock Nationals at Gateway International Raceway (Madison, Ill.). 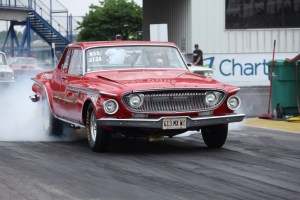 Smokin em up at Gateway 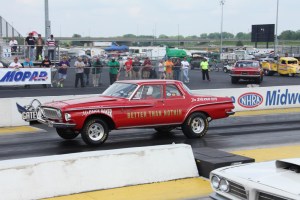 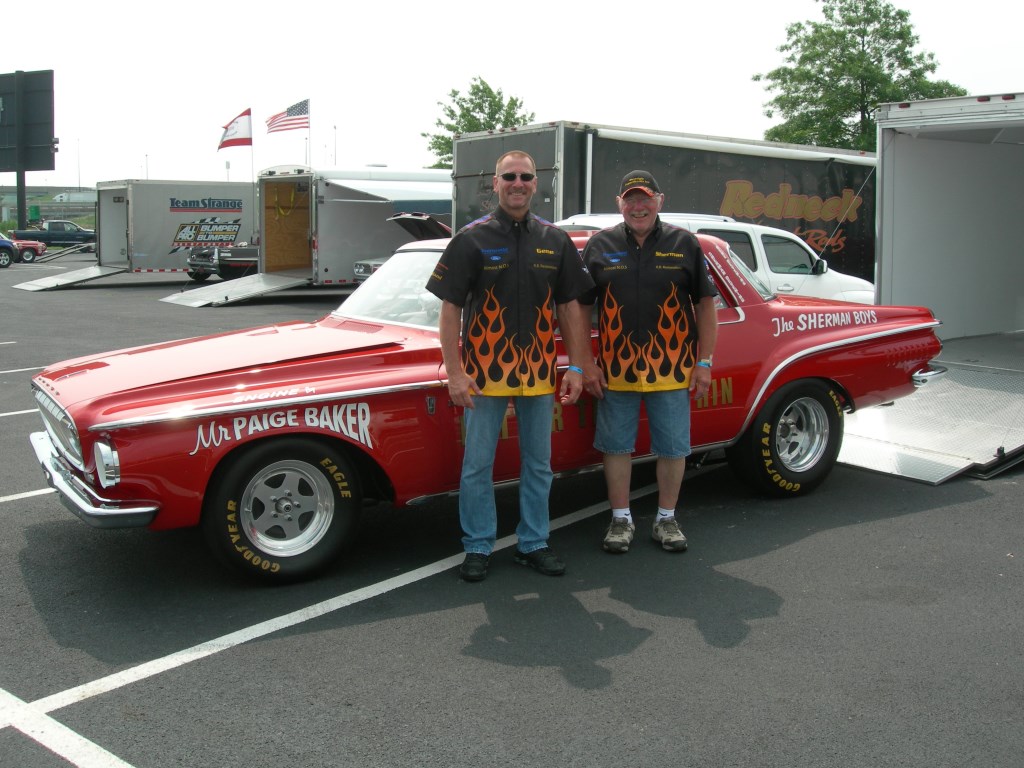