Blast From the Past – Larry Quinn

Larry Quinn is both a master driver and showman; he has been for a long time. And sometimes he exceeds expectations, even his own.

The year was 2013 and the place was Great Lakes Dragaway, where the Christmas Tree is mounted on top of a concrete pedestal, approximately four feet in height and four feet in diameter on the track’s centerline. The sides are painted traffic safety yellow.

The intent is for it to be seen. And for a driver, to avoid that chunk of trouble at all costs. Indeed, Quinn’s blue ’62 Pontiac Catalina, named ‘Blast From The Past’ entirely lives up to its name.

One of the first Nostalgia Super Stock cars to run quicker than 9.00, in 2007 it set an then event-low 8.95 during the Dave Duell Classic NSS Nationals at Gateway International Raceway. 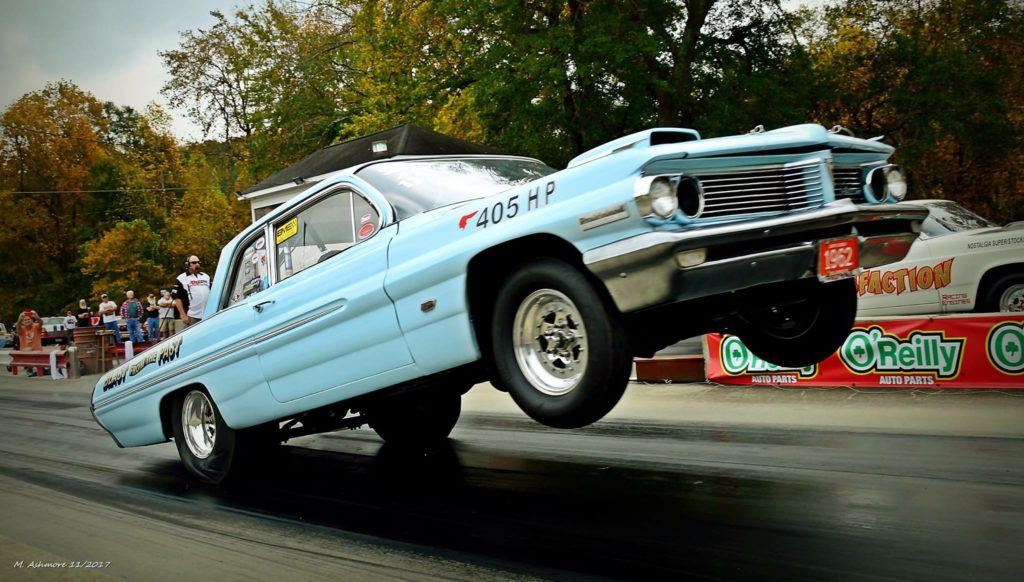 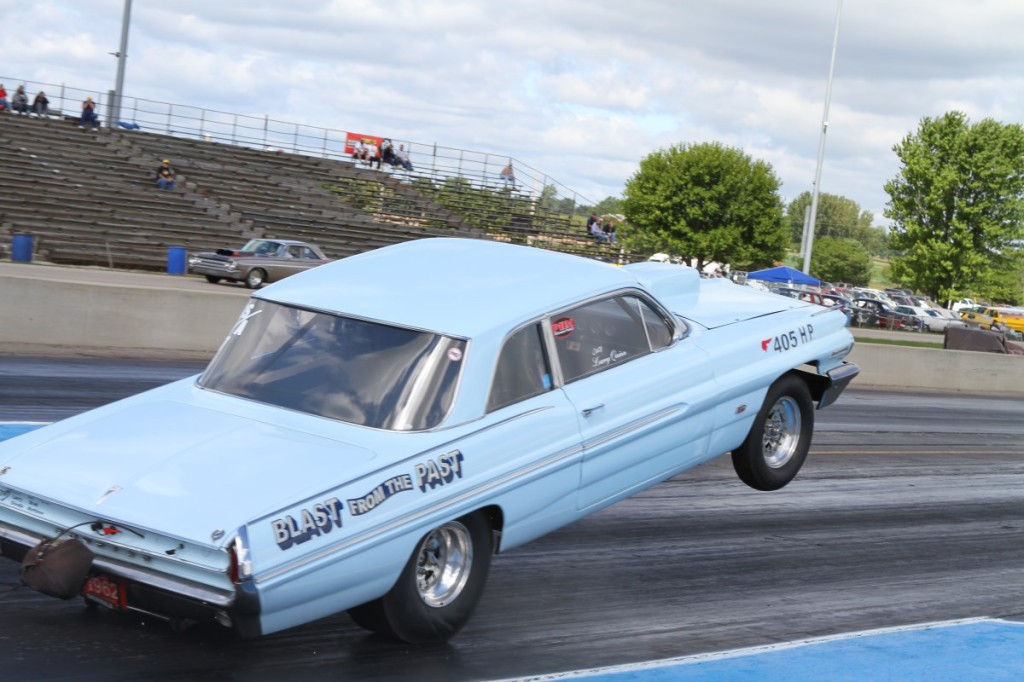 That mile marker had been a long time coming, as Quinn had first driven a race car down the track at age 15 due to a loose tech inspection. “I told the guy I was 16,” said Quinn, whose early racing experiences among many included his brother’s ’62 G/S, a ’32 five-window business coupe in B/G, and some laps at the Whitehall (Illinois) dirt track. “Back then there were no clocks,” said Quinn. “Everything was run heads-up, off a flagman start.”

In 1981 he was in the speed trap when a centerlink broke. “We rolled it up,” he said in a matter-of-fact manner. “We built a new car.”

Quinn ran in the Midwest Pro Stock circuit until 1982 with a Jerry Bickel built ’74 Camaro, a backhalfed car on a unibody with 500 cubic inches and a 4-speed Lenco that clocked in the 8.30’s. “We did a lot of stuff like that with these cars, exhibition style,” said Quinn. “We ran at a lot of tracks that don’t exist today.”

Equipped with a Lenco several years ago to minimize the driveline breakage, ‘Blast From The Past’ launches hard from a dumped clutch, front wheels up and generally goes straight. But as a tribute to and an attraction toward the old days, there is always a little uncertainty about what is going to happen. 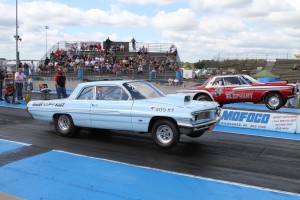 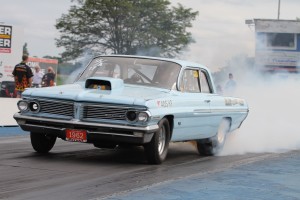 In this particular session at GLD, something immediately went wrong in that left lane. An internal engine failure put water out the headers and under the right side slick. With the left slick driving and the right slick spinning, the car turned right full rudder and headed directly for the pedestal.

Within two seconds from the green light, count it, one thousand one, one thousand two; somehow, some way, Quinn was able to first get the car parallel in the lane and then stopped, with the right rear quarter panel less than three inches from the pedestal.

In my many years of watching many drag races, it was absolutely the best save I have ever seen. “There was just no way I was going to let the car hit that thing,” Quinn said calmly.

Some call ‘Blast From the Past’ the north-side of six-figures Super Stocker. Quinn just smiles that knowing and impish Irish grin and turns his head slightly. He does say the car is not nearly what people think it is but at 2860 pounds the quarter panels and roof are the only original parts, “everything else has been changed.

“We’ve always been on a mission to go fast. We want to give the fans something to see.” 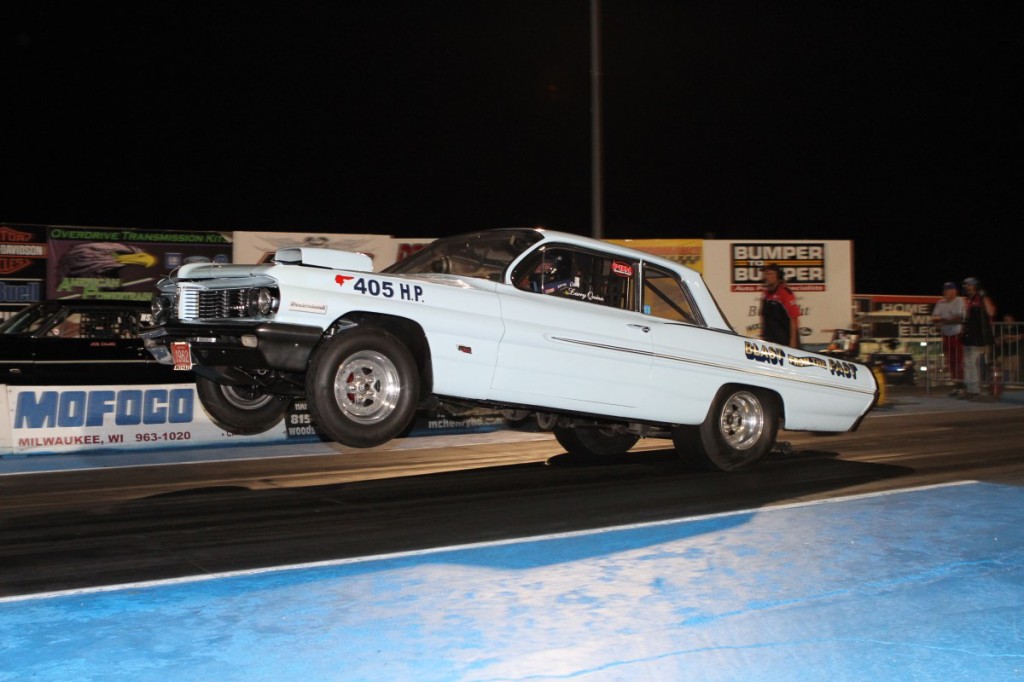 Sometimes nicknamed ‘Crazy’ for his showmanship, Quinn isn’t really. “I can tell by natural instinct pretty much where it is at,” he said. “I never make any deliberate ‘crazy’ moves. “We play rough, bring it back home and fight again. Things happen so fast in there you have to be aware. We still respect the car or any car but each race day it has to be right. We owe the fans the best show we can put on.”

Master showman and driver. The irony of opposites is inescapable. “A lot of people know the car and know that I drive it,” said Quinn, who has been behind the wheel of one of the most recognized and famous attractions in Nostalgia Super Stock racing over the past 21 years.

The essence of the irony? Quinn’s comment on fame comes from his long-time experience of what happens between racing sessions. “Yes, a lot of people know me but I can go up in the stands, walk around anywhere and no one recognizes me,” he said.

Blast From The Past

A wheel-standing, tire-smoking, gear-jamming Baby Blue 1962 Pontiac Catalina, Blast From The Past is an awesomely attractive reminder of the how the early 60’s Pontiacs, Fords, Chevrolets and Mopars started the American Muscle Car Era.

A master showman, ‘Crazy’ Larry Quinn is married to Julie and they have three children, Chris, Mark and Melanie along with two grandsons, Matthew and Evan. Quinn is the CEO of Prairieland Development LLC, which manages real estate nationwide.

One of the most popular drivers in NSS and affectionately called ‘Crazy’ for his wheel-standing high-rpm launches and leave nothing in the trailer style, Quinn has been drag racing more than 40 years and driven most every kind of vehicle, including a 1932 five-window Chevy coupe, a front-motor dragster and a Ford Anglia. Each one of these cars had a manual gearbox and clutch.

In the 1970’s, Quinn ran with the Midwest Pro Stock, Super Comp and Super Gas groups.

A 1962 Catalina, Blast From The Past was originally built in the 1980’s by Larry Hammack, who was eventually forced to sell the machine due to health problems.

While attending the Pontiac Oakland Convention at the Quad Cities in the early 1990’s with a red 1963 Pontiac Catalina 421 4-speed car with 19,000 miles on the clock, the Quinn’s heard there was racing scheduled at nearby Cordova Dragway. It didn’t take long for Larry to be making some runs in the stock class, including a 13.80 at 119 mph pass. He also talked with five Pontiac NSS drivers, who were making exhibition runs during the event.

While they were leaving the track, Julie asked her husband how long it was going to be before they had an NSS car. She got the answer three weeks later, when the Blast From The Past Pontiac was delivered to their shop. The car has been intensely engineered and raced ever since.

2 thoughts on “Blast From the Past – Larry Quinn”