‘Dedicated to Improvement’ is not just a slogan for Jim Brandon, who has been a racer since 1974. It’s a way of life.

His ‘Rebel Rouser’ ’64 Dodge Polara has been a tool in itself for that concept for not only Brandon, the automotive department chairman at Linn State Technical College, but for the school and every student in his programs.

“When I was hired as an instructor at the college in 1993, one of the things discussed in the interview was my racing activities and the possibility of using my background in drag racing for promoting the automotive program,” explained Brandon, a true pioneer in Nostalgia Super Stock. “So in 1994 I started the Tech Team, an after school club for students interested in performance and racing.”

Brandon was in the perfect time and place to get involved in Nostalgia Super Stock racing, mid-1980’s and mid-Missouri, and has been a NSS Inc. club member ten years.

“I had some friends who were into restoring cars and when the nostalgia racing thing got started in the 1980’s we went to one of the events at Mid-American Raceway in Wentzville, MO,” said Brandon. “We decided to build a ‘clone car,’ a 1963 Dodge Max Wedge car and paint it up like the old Ramchargers car.

“We ran some races that were called ‘Muscle From the Past’ where we’d race old-style cars against the new cars. We started getting paid to show up at these events and from that, Nostalgia Super Stock Racing started.”

The team started building the car and had it finished within a school year. The first major race Brandon took the car to was the Super Stock Reunion in Richmond Virginia in 1995.

Every year following, Brandon picked a project to upgrade the race car and the students helped, and they all also worked on many student projects over the years as well.

The admission staff at the College has used the car for events and tours as a focal point for recruiting for many years. Also because of its involvement with Caterpillar, the college became an associate sponsor for the Top Fuel car of Hot Rod Fuller in 2008.

“I got to go to the starting line with the dragster at St. Louis and Fuller won the event that year,” Brandon said. “It was quite an experience.”

Matco Tools helped the Tech Team by providing a sponsorship for the ‘Rebel Rouser,’ and arranged for Antron Brown’s top fuel car to stop at the college for a day when it raced at St. Louis as well. The enrollment of the automotive program increased and the interest in performance areas increased enough that the college gave permission to create a performance option in 2011. The performance operation has replaced the tech team.

The automotive program has been full with a waiting list for the last 6 years. With a part of the Team ASE Grassroots Racing Program, Brandon has used the car to enhance the scope of the school’s Automotive Technology program.

“We teach an ASE Certified Master Program here and I am also an evaluation team leader for certifying other ASE programs here in Missouri,” Brandon stated. “Since we are an ASE Certified Program, we use the NATEF end of program test as the final for our classes. We encourage all of the students to earn their certifications. We have an Advisory Council that includes manufacturer’s reps and shop owners that want to the students to have ASE and NATEF certifications as well, so it’s a good fit for both us and the students.”
The race car has become a tool for the students to apply what they have learned in the classroom, but they learn other things too.

For instance, they are not taught how to restore and buff chrome, but last year, the team took all the chrome off the car and did that. Other things, like the four-link suspension system under the car was designed by the group on a computer program. The school’s alignment machine is capable of measuring the track and wheelbase of the car, so part of the program is showing the students how to set up the race car on it. Welding on a race car is also a little bit different than what they learn in their welding class.

“The bottom line is we get to learn how to use our equipment for other things than just working on street cars,” said Brandon.

And the Rebel Rouser is clearly no ordinary street car. 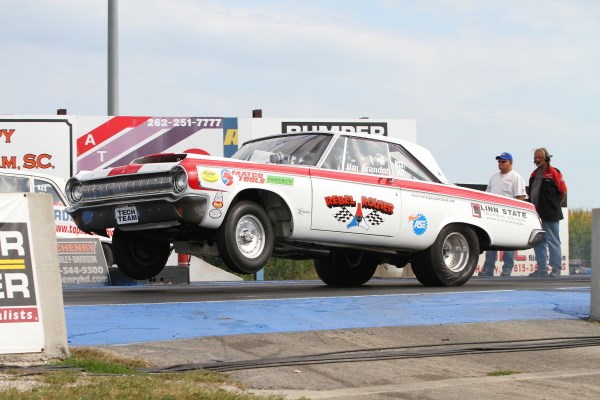 Brandon traded his previous drag car – an altered wheelbase Plymouth Hemi Cuda named ‘Pandemonium’– to a collector in North Carolina who had the 1964 Dodge. A long-time race car, the Rebel Rouser had been campaigned as the ‘Bob Blair Blitzkrieg’ throughout the 1960s. Brandon, who had attended the first meeting that founded the original Midwest Nostalgia Super Stock Association (now known as Nostalgia Super Stocks Inc.), then got the car off the ground by forming the Linn State Tech Team in 1995 giving the students a chance to participate in the project.

Brandon’s project quickly caught on with the students who completely rebuilt the vehicle in the school shop. According to the instructor, “nothing was done out of house” including everything from construction of the roll cage to the final coat of paint.

The first result was a potent retro racer that used to consistently burn up the quarter-mile at a NSS/B 10.50-second pass index and 125 miles per hour top end.

The current engine size has been increased from 496 to 514 cubic inches, featuring innovations listed in the technical section. These ‘improvements’ have taken the machine to the capability to run 9.75 C/FX and quicker.

“We have about 10-15 students who work on the car every year,” said Brandon, who estimates more than 150 students have wrenched the car since its inception. “The students don’t crew car because we race it during the summer when they are not in school, but at most races, I run into two or three students that used to work on the car. I just went to a car show where there were six former students there. Every one of them wanted to talk about the car.”

Brandon usually races the car in five or six Nostalgia Super Stock Inc. events a year. Over the years, the car has been extremely successful winning the MAR Nostalgia Drags Hot Rod Class B championship three consecutive years from 1995-1997. The car also won the MAR Manufacturers Cup 1996 championship and was the NSCA Class B champion in 1999 at the Monster Mopar NSS Nationals.

Because of its success, Rebel Rouser has been featured in several national publications including appearing on the cover of National Dragster in March 1996. It has also been featured in Chrysler Power (November 1997), High Performance Mopar (July 1999), Tomorrow’s Technician (February 2002), St. Louis Motor Racing News (July 1997) and Street Thunder Magazine (December 2006).. The past two years, the car has been part of the NSS-Monster.com Super Stock Calendar.

“It’s been a great learning tool for our students,” said Brandon. “The car has also brought recognition to the college. All the students recognize it, not just the automotive students. Last year, we displayed the car with “Hot Rod” Fuller’s Top Fuel dragster in our new student Activity Center and the response was great. It’s been a winner for everyone involved.” 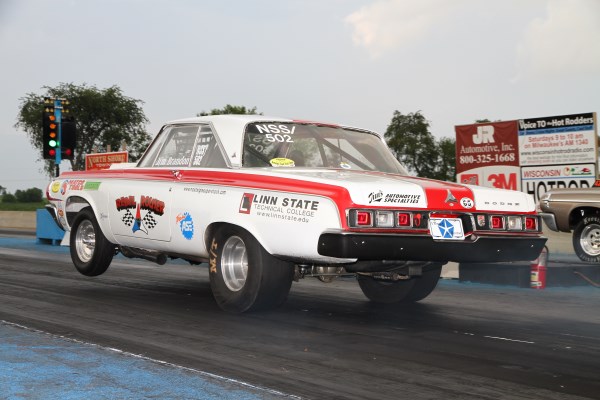 Information about Linn State Technical College, which has 90 percent plus placement rate after graduation, can be viewed at www.linnstate.edu.

“A lot of schools use performance activities as a recruitment tool, but I wanted our performance option to give students the knowledge needed to actually get a job in the performance industry,” said Brandon. “The curriculum is a combination of general automotive classes the first year, and the second year is performance topics, we teach engine tuning on chassis and engine dyno, students get welding classes, sheet metal fabrication, chassis fabrication, flow bench work, and even a CDL because most race teams require the new guys to drive the truck and trailer to the events.

“One of the other reasons I originally started the Tech Team, was that over the years I had seen a lot of people get involved in racing and soon quit because they burned threw so much money trying to build and maintain a car that they just could not afford to race anymore. I have never had a lot of resources to field a car but have managed to do so since 1976.

“Part of what I tried to teach the students was that proper planning and figuring out what you need as opposed to what you want, and not to get caught up in the latest fad or trick of the week published in the magazines.

“I have always built the complete car, engine, transmission axle, chassis, etc. And a major part of the satisfaction is in the building process and the research and gaining the knowledge to build and field the car, not just the racing. Racers like Warren Johnson and Bob Glidden were who I looked up to as they did everything as well.”

In addition, Linn State has been chosen as one of the top ten community colleges in the US.

And for Brandon, there has been some both personal and professional additional satisfaction as a few years ago he won the Missouri Governor’s Award for excellence in teaching.

The program is designed to draw attention to the thousands of ASE-certified professionals who are actively participating in all forms of motorsports. Each Team ASE Grassroots Racing Program participant receives Team ASE decals for their helmets and race vehicles, Team ASE Racing hats and embroidered uniform insignias as well as camera-ready artwork for local and area promotional efforts.

Students in the Automotive Technology Program at Linn State Technical College benefit from a state-of-the-art educational facility. The ASE Certified Program uses the ASE NATEF end of program test as the final exam for its classes.

(Author’s Note: This story contains some excerpts from a May 2008 feature story on Jim Brandon and the ‘Rebel Rouser’ by John Close)

Emphasizing perhaps the ultimate in teamwork, the Rebel Rouser 1964 Dodge Polara was built and continues to be maintained by The Tech Team, students in the automotive program at Linn State Technical College of Missouri.

A long-time race car, the Rebel Rouser was run as the Bob Blair Blitzkreig in the 1960’s. Brandon purchased the car in North Carolina and The Tech Team did the NSS build in 1992. The vehicle has been featured in several national publications, including National Dragster (March 1996), Chrysler Power (November 1997), High Performance Mopar (July 1999) and Tomorrow’s Technician (February 2002).

The vehicle was built for NSS completely in the school shop, including roll cage and paint. “Nothing was done out of house,” said Brandon.