CLERMONT, Ind. – It wasn’t drag race despair, but it was definitely a drag race downer.

After enduring a second-day rainout, five consecutive event cancellations and then a day-before hailstorm, Nostalgia Super Stock® Inc. rolled into Lucas Oil Raceway (Indianapolis) after a multi-year absence with eager expectations and a sense of satisfaction in returning to one of the sport’s top venues.

However, the optimism was soon offset by the disappointment of few race cars and fewer spectators at the Quarter-Mile Classic on July 18.

Working with the Midwest Nostalgia Pro Stock Association, the two groups had a combined 24 vehicles available for their heads-up format.

With a concurrent elapsed time bracket and Top Sportsman program also in place, I counted 31 people in the east grandstands at 10:30 a.m. Saturday. The west stands were empty.

The air temperature was already above 90 degrees and the humidity a sauna-like 63 percent. By the early afternoon hours, conditions were even worse from a human-comfort point of view, with numbers of 96 for the air and 77 for a dewpoint.

For the cars, the density altitudes were above 4500 feet. According to track staff, the surface temperature was 126 degrees. 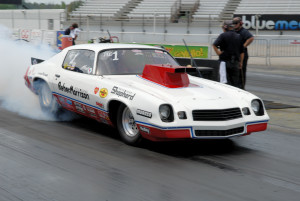 Mark Pappas on a long smokey burnout. Mark always puts on a great show and is one of the most popular drivers in Nostalgia Pro Stock

The Super Stockers ran four sessions, highlighted by Paul Habura’s 8.715 at 154.60 mph in the second stanza. There was no time recorded on the run sheet for his second pass.

Larry Quinn’s 1962 Pontiac ‘Blast From The Past’ and John Grinwald in the ‘My Gold Digger’ 1965 Dodge altered wheelbase car were paired together all day. However, in the first session, a fizzled fuel pump and rattling rods in other cars made chaos of the run order and each ended up running a single.

During the off season, Quinn had installed a set of 5.29 to 1 rear end gears and at the first event at Sikeston, Mo. in early May had fought the car’s tendency to push hard to the left. This time, each run was straight and true.

“Larry has a very potent 1/8-mile car right now,” said Grinwald. “He was in front of me all day and I had to work hard and get lucky to get near him.”

Several other match-ups stood out in each session.

Gerry Gostenik of Dearborn, MI in his black 1961 Chevy 409 four speed matches up against Marty Bittle of Belleville, IL in his 1965 Plymouth Hemi.

Before session three, Durling was pleased to see the pairings. 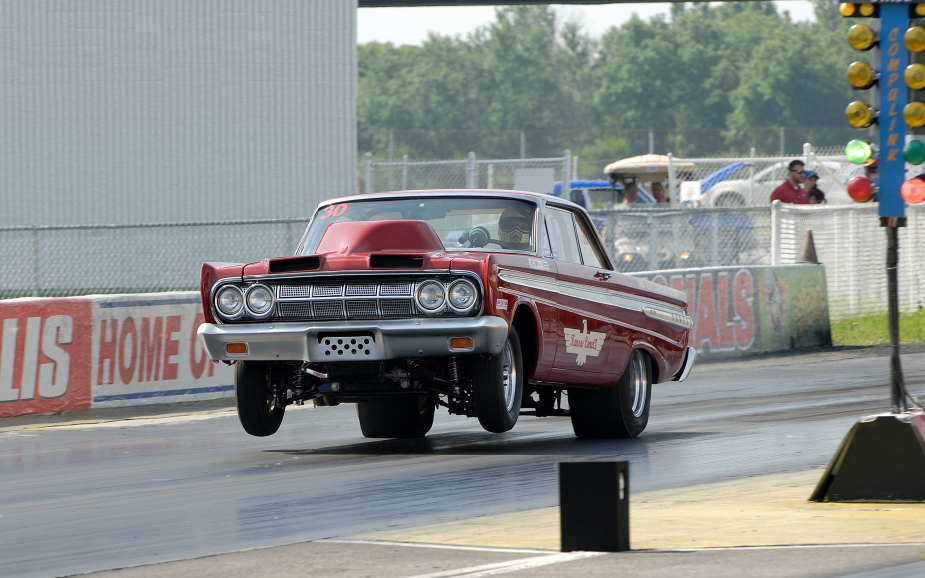 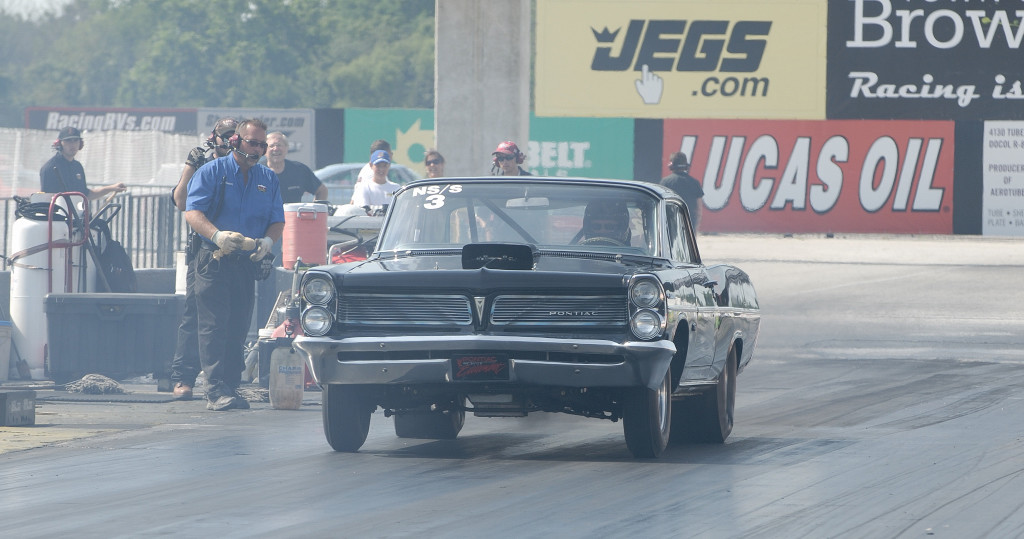 The damage report includes the 1963 ‘Rompin’ Redskin’ of Joe Zajac, who left oil on the starting line in the first session and Spencer Schreindl, who did a remarkable job of driving to keep his ‘Max Wedgie’ 1964 Dodge rubber-side down and off the right lane wall when some rods rattled loose at the finish line after stopping the clocks at 9.036 at 150.38 mph. 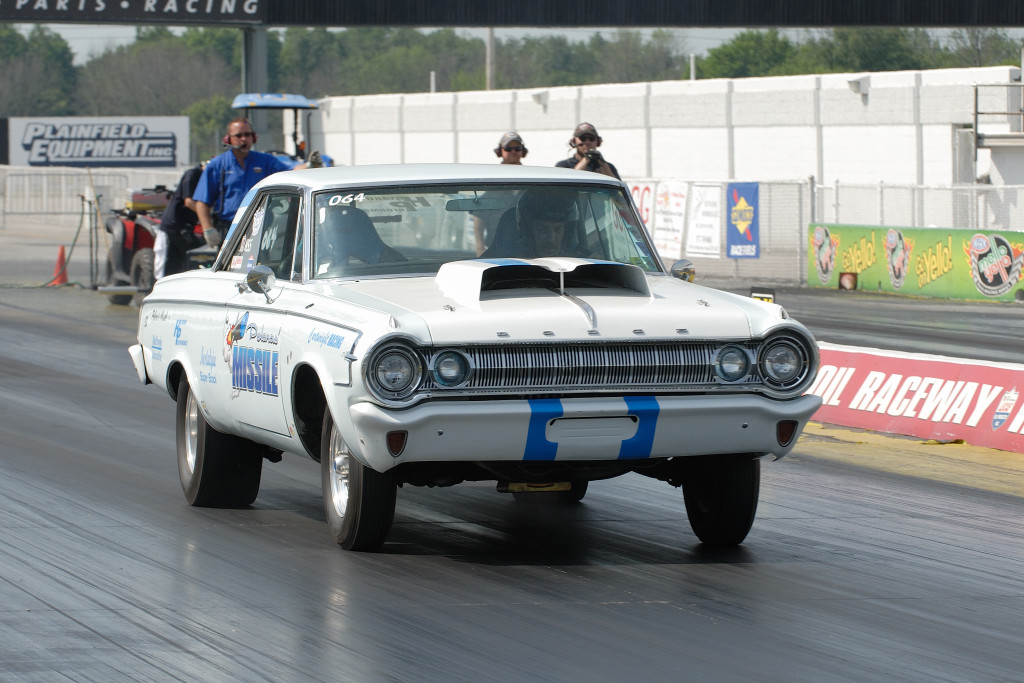 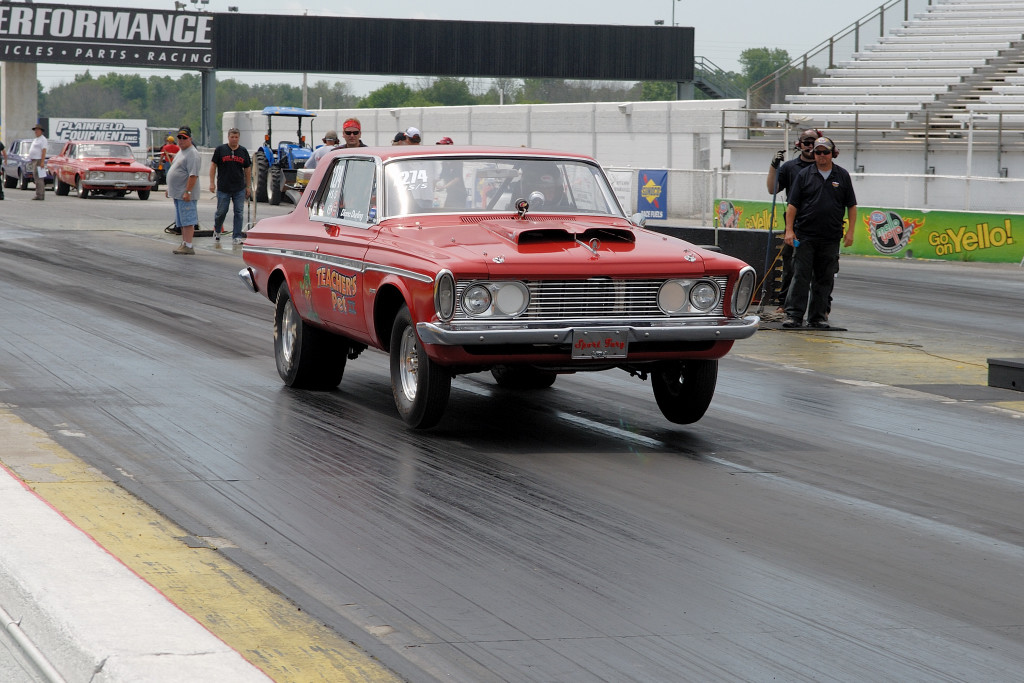 Here goes Bob Durling in the 1963 “Teachers Pet II ” 1963 Plymouth. Bob and his wife Diana are from Mooresville, IN.

Jungle George” Kubis driving the “Billy the Kid” Stepp Plymouth Arrow and John Denbrock’s “Grumpy’s Toy” Vega battling it out
at the world famous Lucas Oil Raceway. These cars are so correct in every detail that you really think your back in the seventies. 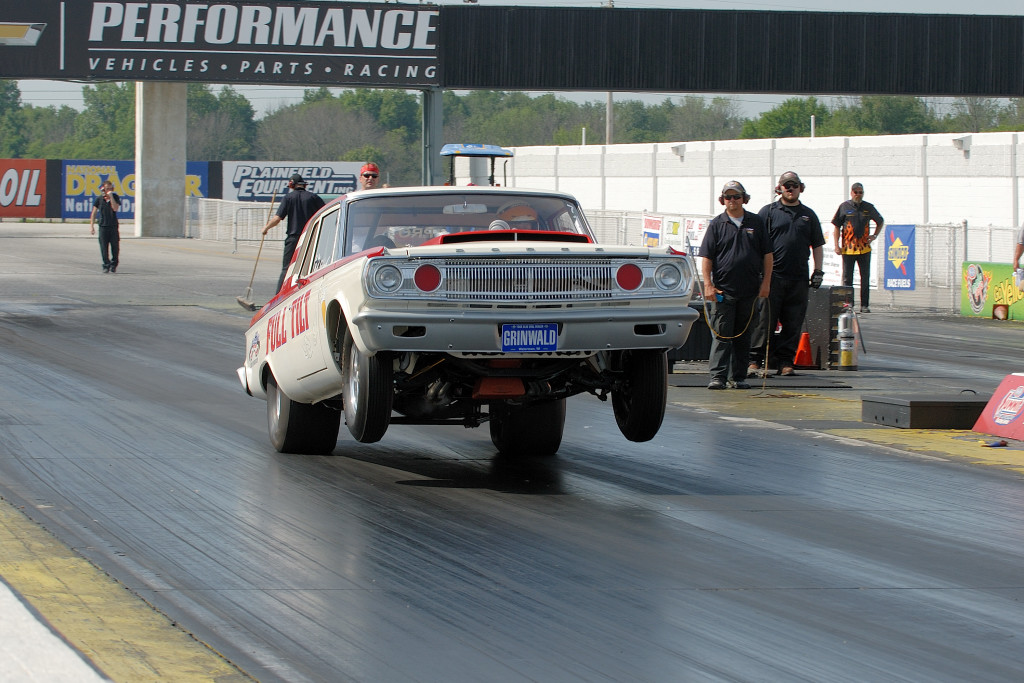 Heres one of the new members of NSSR Inc Milt Schreindl of Waterford, WI in his 1965 Dodge “Full Tilt”
showing his son Spencer how to do a real wheelie ! Spencer drives the Max Wedgie car 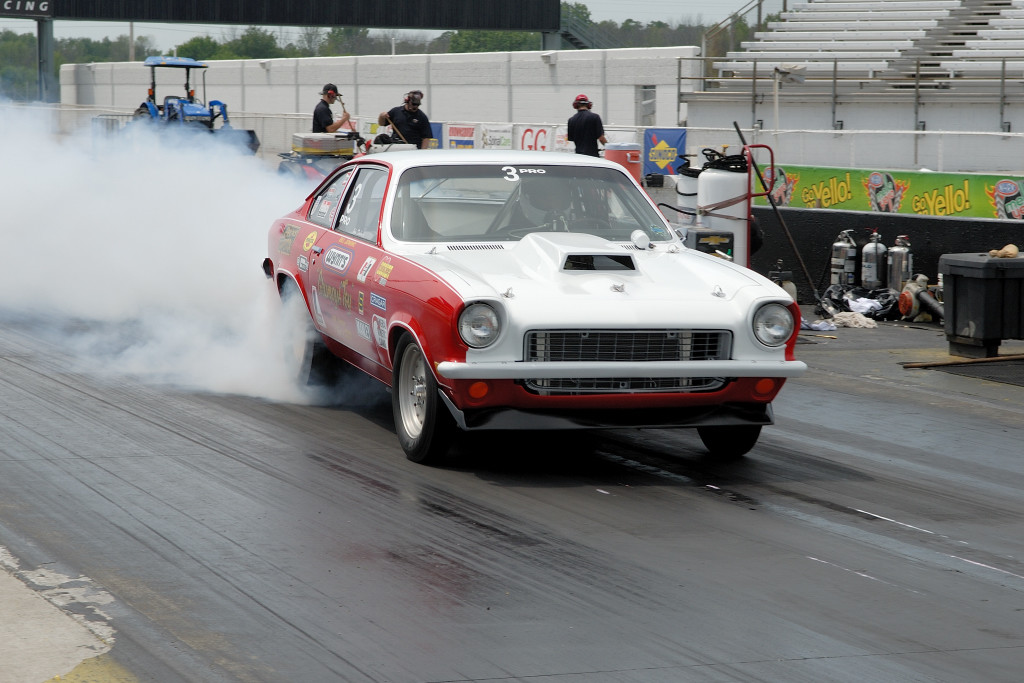 John Denbrock brought this awesome Vega to the event. John is the newest member of the group and fits in nicely with his Bill Jenkins tribute car

The Battle is on

Marty Bittle , Belleville, IL, lighting them up – And the Launch

Chuck Weck (the world’s fastest test monkey) was on hand with his Team Strange/ Gene Fasching tribute Firebird. Chuck’s driving prowess coupled with big inch Opel Engineering power plant is a hard combo to beat. Just ask anyone who has lined up next to him !

One thought on “2015 Quarter-Mile Classic”