As the season winds down we just completed another event at U.S. 36 Osborn, MO. We normally take 8-10 cars there
And this time we were within that count at 9. Great weather in the upper 70’s and we got to try out the new 440 feet
of new concrete. Great job on the concrete with a very smooth transition back to asphalt. We ran three runs with the fourth
canceled due to a rain shower just when we were called to the lanes about 10:45 pm.

One of our founding members and NSS Inc hall of famers Dave Campbell and wife Emma were in the house. Before our
first pass we left our cars in the staging lanes and the drivers and Dave stood at the starting line. With Dave giving
a brief history lesson about our group over the PA system. No cars were running so all could hear his address. Upon
finishing he then went into driver introduction followed by each driver handing out one of our NSS T-shirts to some lucky
child in the stands. We witnessed some real big smiles on kid’s faces. Great job from Dave and all the drivers.

We also had a racer who some of us remember from some 15 plus years ago at U.S. 36. His name is Paul Eikel from the
Columbia, MO area. He race that evening some 15 years ago with us in his freshly built 1967 Ford Fairlane. A mishap
of sorts happened with one of our drivers (Joe Vega) on the track that sent them both into the left guardrail leaving
both cars heavily damaged. Both drivers escaped with no injuries as I recall. Well anyway, Paul and son Justin spent
a lot of time and money determined to rebuild their car and we had the pleasure of having them run with us again.
The car is white and named “OLD GLORY” and is a great looking car. We thank Paul and his wife Liz and son along with
other friends for bringing it out to be part our evening of racing. Also a special thanks to old member Wayne Keimig
for being there with his lady friend. Great to see him again and hope to see him again in the future with his car! 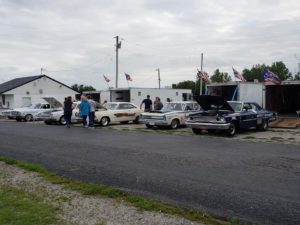 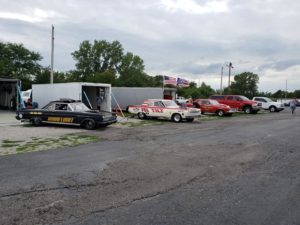 Moving on to food. Once again we ate very well with Alicia making beef brisket(excellent) and others bringing salads, mac & cheese, fruits & veggies and desserts. Also Renee Schreindl and Alicia Henderson are going to have to challenge all on a cookie
bake off contest sometime because they have displayed some great – I mean great – cookies. Also had a piece of Emma’s chocolate cake and one piece wasn’t enough, had a second one. Thanks to all that contributed the great food, well appreciated.
Oh, almost forgot about racing, so here is a brief summary, it was good and all the cars were running at the end of the night.
That’s all folks ’til next time. 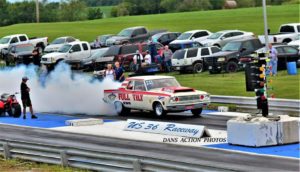